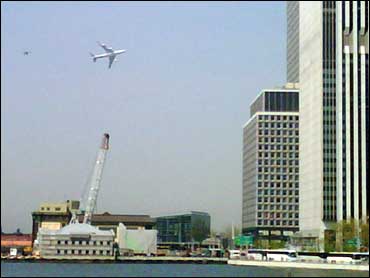 (AP Photo/Jason McLane)
Along with scaring New Yorkers, the military flyover of lower Manhattan on Monday cost taxpayers $328,835, reports WCBS in New York. That bill includes $300,658 for the larger plane, which flew a three-hour mission, and about $28,178 for two F-16 jets, which flew 1.8 hours each, said Air Force spokeswoman Vicki Stein.

It's also been learned that federal officials knew that sending two fighter jets and an Air Force One flying at low altitudes over the statue of Liberty and Ground Zero might spark fears of a 9/11 repeat, when two commercial jet liners were piloted into the World Trade Center buildings.

In a memo obtained by CBS 2 HD the Federal Aviation Administration's James Johnston said the agency was aware of "the possibility of public concern regarding DOD (Department of Defense) aircraft flying at low altitudes" in and around New York City. But they demanded total secrecy from the NYPD, the Secret Service, the FBI and even the mayor's office and threatened federal sanctions if the secret got out.

A furious President Barack Obama ordered an internal review of the low-flying photo op over the Statue of Liberty.