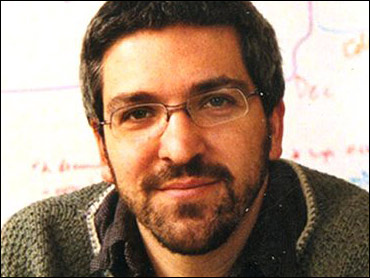 A militant group said it has kidnapped a missing Western journalist and would kill him if U.S. forces did not leave the holy city of Najaf within 48 hours, Al-Jazeera reported Thursday.

A group calling itself the Martyrs Brigade released a video to the pan-Arab television station that purported to show Micah Garen, who had been snatched off the streets of the southern city of Nasiriyah on Friday along with his Iraqi translator, Amir Doushi.

In the video, the kidnappers threatened to kill Garen within two days if U.S. forces did not leave Najaf, where they have been fighting with militants linked to militant Shiite cleric Muqtada al-Sadr for two weeks.

Most of the insurgents behind the kidnappings of scores of foreigners here in recent months have been Sunni Muslims, not those aligned with al-Sadr or other Shiite groups.

When Shiite militants in the southern city of Basra kidnapped British journalist James Brandon on Friday and threatened to kill him, al-Sadr's aides condemned them and pressured them to release him, which they quickly did.

According to witnesses, Garen and Doushi, were walking through a Nasiriyah market when two men in civilian clothes and armed with Kalashnikov assault rifles seized them Friday, police said.

At the time of his abduction, Garen, 36, was working on a story about the looting of archaeological sites in Iraq, his fiance, Marie-Helene Carleton said.

Garen worked for Four Corners media, identified on its Web site as a "documentary organization working in still photography, video and print media."

The site features photographs of archaeological sites like Ishin Bahryiat, Babylon and Ur, as well as pictures of Iraqi looters and U.S. troops.

Neither U.S. nor Iraqi forces had any word on Garen's fate Wednesday.

Several hostages have been executed in Iraq.

One of four Italians taken captive was killed in April.

In May, American businessman

In June, a videotape emerged purporting to depict the murder of captured American soldier Keith Maupin, but the military has been unable to confirm the event.