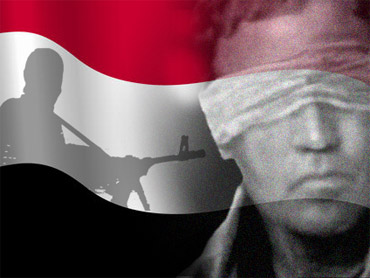 Under a hail of gunfire and grenades, heavily-armed militants believed to be al Qaeda stormed the intelligence services' jail in a southern Yemen port city on Saturday, killing at least 10 people, security officials said.

An eyewitness outside the security building in Aden, about 200 miles south of the capital, San'a, said the gunmen made off with several freed prisoners.

The blatant prison break highlights the challenges Yemen's U.S.-backed government faces in battling increasingly brazen al Qaeda elements that have found refuge in this impoverished country at the tip of the Arabian Peninsula.

U.S. officials fear Yemen is becoming a terror staging ground and say insurgents, including individuals from the U.S., are training in militant camps in Yemen's vast lawless spaces.

Saturday's attack began when armed men fired on the entrance of the regional intelligence headquarters, then shot their way into its detention facility, where al Qaeda suspects are often held, the security officials said.

An eyewitness, who works at the building and was outside the premises at the time of the attack, said he saw four gunmen hit the entrance with rocket-propelled and hand grenades before rushing inside under a hail of gunfire. He said a firefight ensured, but the attackers managed to escape with several detainees they had freed from the facility.

Speaking to The Associated Press by phone from Aden, the eyewitness said he saw at least 10 seriously wounded or dead bodies lying near the building before ambulances took them away. The eyewitness spoke on condition of anonymity for fear of reprisals.

He said the attackers had driven up in a car and a minivan, which they parked by a neighboring hotel before attacking the intelligence headquarters.

Nearby residents also reported heavy gunfire and plumes of smoke rising from the building, as well as ambulances leaving the area.

Security officials said the dead included seven security officers and three women who worked in the building. They did not comment on whether the militants had freed any prisoners. Hospital officials said at least 15 people had been brought to the local hospital in Aden but did not say if any were dead.

No group immediately claimed responsibility for the attack, but the security officials said it had the typical signs of al Qaeda. They spoke on condition of anonymity because they were not authorized to speak to media.

In 2003, 10 men escaped from the same building in Aden, including one later convicted of involvement in the plot to blow up the USS Cole in 2000, killing 17 American sailors in what was one of al Qaeda's most dramatic pre-9/11 attacks.

And in 2006, 23 prominent al Qaeda prisoners escaped from a different facility, making their way out though a dugout tunnel that emerged in a mosque outside the prison.

That escape boosted the strength of al Qaeda's offshoot in Yemen, a process that accelerated in January 2009 when it merged with Saudi al Qaeda militants to form al Qaeda in the Arabian Peninsula.

American worries about Yemen's ability to fight al Qaeda heightened last year after several Yemeni detainees who had been released from the U.S. prison at Guantanamo Bay, Cuba, resurfaced as leaders of the al Qaeda offshoot.

Those concerns deepened last December, when al Qaeda in the Arabian Peninsula claimed responsibility for the failed attempt to blow up a Detroit-bound airliner. In the wake of the Christmas attack, Yemen's military and airforce have struck repeatedly at al Qaeda sites and suspected hideouts.
By Associated Press Writer Ahmed Al-Haj