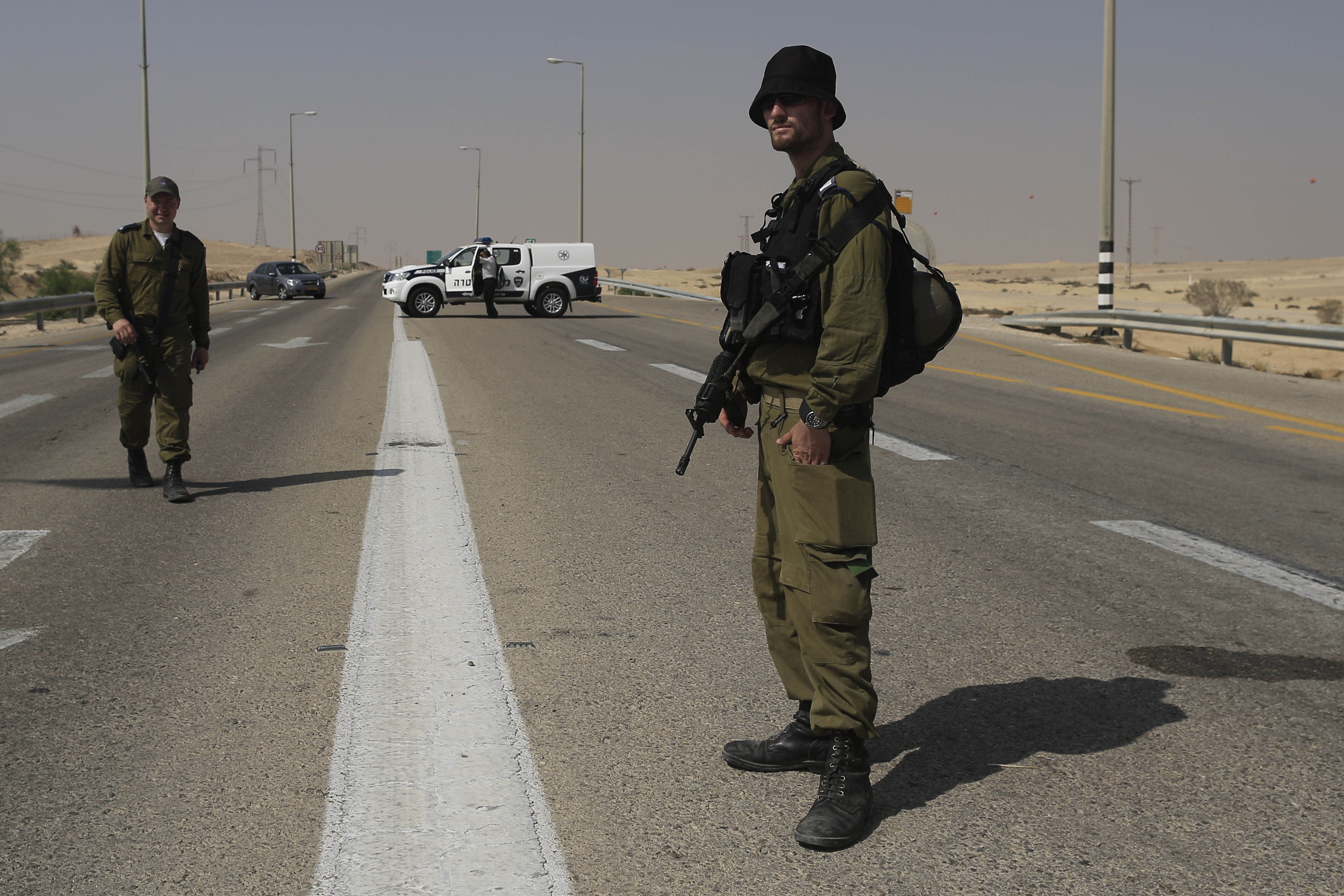 (AP) JERUSALEM - Unidentified militants crossed from Egypt's turbulent Sinai Peninsula into southern Israel on Monday, opening light arms and anti-tank fire on civilians building a security fence meant to fortify the porous border, defense officials said. One of the Israeli workers was killed, and two militants were gunned down by troops responding to the attack, the officials said.

The military spokesman's office said troops were searching for three or four other militants believed to be at large inside Israel. Chief spokesman Brig.-Gen. Yoav Mordechai told Israel Radio that Israelis living in the area were asked to remain inside their communities until the military finished its search, and two major southern roads were closed to civilian traffic.

The incident underscored the growing lawlessness in the Sinai desert since longtime Egyptian President Hosni Mubarak was toppled from power by a popular uprising last year. The ensuing political turmoil in Egypt, weak policing in the area and tough terrain have all encouraged Islamic militant activity in the region. The mountainous desert now harbors an array of militant groups, including Palestinian extremists and al Qaeda-inspired jihadists, Egyptian and Israeli security officials say.

Defense Minister Ehud Barak told Army Radio that there has been "a worrisome weakening of Egyptian control" in the Sinai. Barak said he expected the winner of this week's presidential elections in Egypt to honor the country's international obligations - an apparent reference to Egypt's 1979 peace treaty with Israel.

Vice Premier Shaul Mofaz, a former defense minister and military chief, said he hoped Israel could conduct a security dialogue with the Egyptians and demand more forceful policing in the Sinai.

"No doubt Sinai has become a security problem," Mofaz told Army Radio. "Today's incident ratchets it up a notch."

Israel was bracing for the possibility of more attacks from the Sinai after two rockets believed fired from there struck southern Israel over the weekend.

But the magnitude of the growing threat from Sinai was driven home most forcefully last August, when gunmen from Sinai infiltrated Israel and ambushed vehicles on a desert highway, killing eight Israelis. Six Egyptians were killed in Israel's subsequent hunt for the militants, causing a diplomatic crisis between the two neighbors that ended with an Israeli apology.

In response, Israel increased its surveillance on the Egyptian border and began building an electronic barrier along the 230-kilometer (150-mile) frontier in a bid to keep out both militants and illegal migrants from Africa. The government has said it expects the fence to be completed by the end of the year.

The deadly August attack shattered decades of calm along the frontier area, prompting officials on both sides of the border to examine security arrangements.

As part of its landmark first peace treaty with an Arab state, Israel agreed in 1979 to return the Sinai, captured in the 1967 Mideast war, to Egypt, but insisted the vast desert triangle separating Asia from Africa be significantly demilitarized. As the frontier area grew more volatile following Mubarak's ouster, Israel allowed thousands more Egyptian troops to police the area and has beefed up its own military deployment along the border.

The reinforced security deployment has not quieted the Sinai, however, and democratic elections for parliament and president did not resolve the instability in Egypt, which has Israel worried about the future of the 1979 peace accord.

The ruling Egyptian military dissolved the newly elected parliament and assumed sweeping powers subordinating the president and ensuring their hold on the state. The Muslim Brotherhood, which declared early Monday that its candidate, Mohammed Morsi, won this week's presidential election, has challenged the military's power grab, raising the prospect of a power struggle between Egypt's two strongest forces.