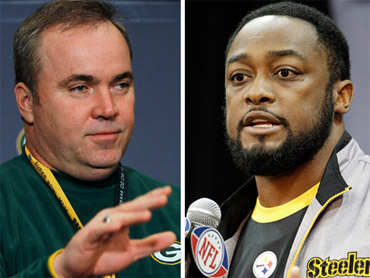 No one asks that anymore.

The coaches in Sunday's Super Bowl - Pittsburgh's Mike Tomlin and Green Bay's Mike McCarthy - were fairly obscure NFL coordinators when they were hired.

No one argues about their credentials now.

CBSSports.com senior writer Clark Judge says Tomlin and McCarthy are part of a movement that has the NFL's best coaching jobs going to newcomers and that keeps qualified candidates like Bill Cowher, Jon Gruden and Brian Billick -- all of whom have Super Bowl credentials -- on TV.

Tomlin was the youngest coach to win a Super Bowl when he took the Steelers to the 2008 title. McCarthy led the Packers to the playoffs in three of his five seasons, culminating with their first trip to the big game since the 1997 season.

"You can't put into words what he brings to a football team," Steelers offensive coordinator Bruce Arians said, referring to Tomlin. "Intelligence, character, leadership, all the things you want in your head coach, and an uncanny rapport with his players, because he's basically their age."

Tomlin is 38; three players are only three years younger.

"For his age, he's more intelligent than a lot of people who are probably older than him," cornerback Ike Taylor said. "He carries himself real well. Of course, he sees a lot of things other people don't see on and off the field."

Tomlin spent one year as Minnesota's defensive coordinator when the Steelers picked him to replace Bill Cowher and become just their third head coach since 1969. He and Tony Dungy are the only black coaches to win a Super Bowl.

"I embrace what comes with being a head coach," Tomlin said, "and a lot of times that means making solo decisions and not finding comfort in certain places, and that's OK. My job is to lead these men, provide direction and a compass for them, and I take pride in doing it."

McCarthy is actually the coach with Pittsburgh roots, having grown up in the Steel City - rooting for the Steelers, naturally - and developing a desire to get into the business from watching Chuck Noll. While Tomlin is an intense, back-slapper on the sideline, the 47-year-old McCarthy isn't quite so demonstrative.

"He's a tough guy. He's a Pittsburgh guy," cornerback Charles Woodson said. "I think that's his presence. We kind of feed off of that. He wants his football team to play tough. I think we've done that over the course of this season. I think that's why we're here."

McCarthy was the offensive coordinator in San Francisco when he stepped into a position that always will be measured against one of the gods of the game, Vince Lombardi.

"I don't look at it like that," McCarthy said. "I look at it as an asset. When you walk into your building every day and you have pictures of Curly Lambeau, Vince Lombardi and Mike Holmgren, our history is among us all of the time. It creates a standard and expectation that fits right along with our vision."

Both Mikes are involved in player evaluations, but leave much of the personnel operations to the men hired for those duties: Kevin Colbert in Pittsburgh, Ted Thompson in Green Bay. Tomlin and McCarthy stick to their areas of expertise, but operate very differently.

McCarthy calls all the plays on offense for Aaron Rodgers, something that's worked well with the Packers averaging more than 24 points a game and Rodgers rising to the upper echelon of quarterbacks. Tomlin contributes to the defensive schemes, but allows longtime coordinator Dick LeBeau to control the calls.

Neither coach feels threatened by his underlings, either. If Tomlin had been, he never would have kept LeBeau, one of football's greatest defensive innovators. If McCarthy had been, he would have brought in someone less accomplished that Dom Capers to run the defense two years ago.

Both coaches have dealt with significant quarterback issues. Pittsburgh went 3-1 during Ben Roethlisberger's four-game suspension for violating the NFL's personal conduct policy. McCarthy was the coach who said goodbye to Brett Favre in 2008, a disruptive chapter in Packers lore he hopes has been blunted by Rodgers' development and the team's presence in Dallas.

Tomlin's biggest challenge has been living up to the achievements of Noll and Cowher.

For the other Mike, recognizing and accepting the high standards in a place called Titletown USA is a must.

"I look at the history of the Green Bay Packers as a tremendous asset to our football team, the commitment to football," McCarthy said. "It's all about winning on the field. That's a tremendous advantage that we feel that we have in Green Bay."