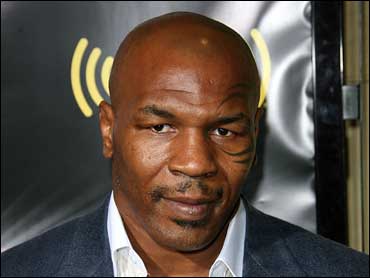 When Mike Tyson looks back on his friendship with Tupac Shakur, he thinks about the rapper's big heart, explosive anger — and the one regret he has about their relationship.

"He always wanted me to smoke weed (marijuana) with him, and I never did it, and I wish I did," Tyson said in a recent phone interview.

Tyson said he declined because he was a closet smoker and didn't want it to get out that he smoked the drug. Now, when he looks back on the lost opportunity, he says: "That's my biggest regret."

Tyson's friendship with Shakur is the subject of a new documentary, "One Night in Vegas: Tyson & Tupac," which airs Tuesday on ESPN.

"He didn't last long, but the time he did last, every minute, every tenth of a moment was explosive," Tyson said.

The documentary chronicles their relationship, which Tyson said took hold when he was imprisoned in 1992 for rape.

"Every day, he would call me or get a chance to call me or send a message," said Tyson. "He would get word to me in prison."

By the time Tyson was released in 1995, Shakur would be jailed for sex abuse; he was released on bond later that year. When he got out of prison, Tyson and Shakur's friendship deepened. Both found it difficult to find people who truly cared for them, Tyson said.

"Our problem was we always had to worry about someone betraying us, our closest friends," Tyson said.

Friendship was so important to Shakur that he criticized Tyson when he selected a song from rapper Redman as his intro music at a fight.

"He said, 'Don't you ever play those (expletive) songs again, they don't give a (expletive) about you,"' Tyson recalled. "When he said that, it pierced my soul. ... I felt like I did something wrong."

After that talk, Tyson decided Shakur's raps would be his intro music for life.

It was partly because Tyson had chosen Shakur's music as his fight music that Shakur went to Tyson's fight in Las Vegas. He made a special rap for Tyson's big night. After the fight, which Tyson won by knockout, Shakur was to join Tyson at a victory party. But he never made it.

"I felt extremely guilty because I felt if he didn't come to this fight, that would have never have happened," he said. "It's just so crazy that we had talked every day for a week."

"He was probably a misguided warrior. He had a heart as big as this planet," Tyson said. "He had so much love and compassion, and you couldn't even see it under his rage."

It's because of those qualities that he remains larger than life in death, he said.

"He's going to last until the time this Earth comes to an end," he said. "I'm glad to be a part of his life and to have known him."

ESPN is owned by the Walt Disney Co.