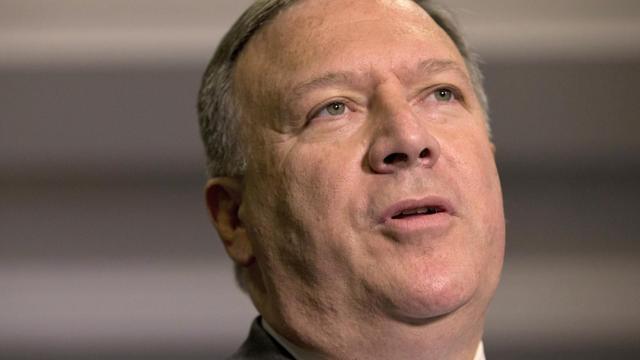 Almost exactly 24 hours after being confirmed, Mike Pompeo held his first press conference as secretary of state on the sidelines of the NATO ministerial meetings in Brussels on Friday.

Pompeo, speaking hours after North and South Korean leaders hugged and declared a "new history," congratulated them on their "historic meeting." He also singled out President Trump for instigating North Korea's engagement with the outside world.

"Let there be no doubt, we would not be where we are today without President Trump's maximum pressure campaign and the work that has been done all around the world to apply pressure to North Korea," Pompeo said.

Pompeo explained he is careful not to get ahead of himself on North Korea while still striking a note of cautious optimism. While acknowledging that past negotiations with North Korea had been largely unsuccessful, he did not cast Kim Jong Un as insincere.

"I did get a sense that he was serious," Pompeo said of the North Korean leader, whom he recently met. "The economic pressure that has been put in place by this global effort that President Trump has led, has led him to believe that it is in his best interest to come to the table and talk about denuclearization."

Pompeo notably put a finer point on what the Trump administration expects to see as a result of engaging with the nuclear-capable hermit kingdom.

"We are committed to achieving permanent, verifiable, irreversible dismantlement of North Korea's weapons of mass destruction programs without delay," Pompeo declared. He added that while the U.S. seeks to remove highly dangerous weapons from North Korea, it is not interested in removing its forces from the region.

Beyond North Korea, Pompeo also bluntly served up the rest of his top agenda items: revitalizing the State Department, being tough on Russia until it "complies with international law," navigating the Iran deal and, on the whole, serving as America's chief diplomat.

Pompeo immediately thanked the State Department officers for helping him get going so quickly. And unlike his predecessor, Rex Tillerson, Pompeo had already made it a point to meet with local State Department employees during his visit to Europe. Tillerson did not do that on his first few international trips, which was one of the reasons that the department initially acquired a cold view of him.

One of the biggest upcoming tasks for the State Department will be handling the fallout and follow-up action once Trump makes a decision about the Iran deal. It is likely that he will soon announce that the U.S. will exit the deal in May, as visiting French President Emanuel Macron predicted earlier this week. Pompeo said that decision has not officially been made but hinted at what is to come.

"There has been no decision made so the team is working and I am sure we will have lots of conversations, to deliver on what the president has made clear, absent a substantial fix, absent overcoming the shortcomings, the flaws of the deal -- he is unlikely to stay in that deal," Pompeo said.