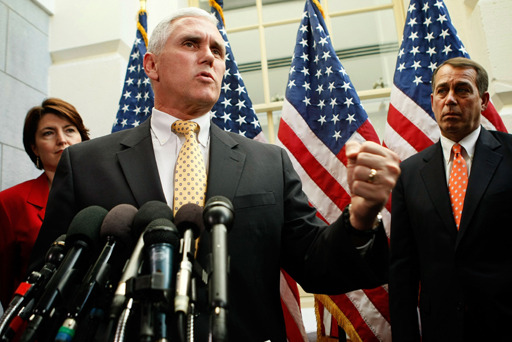 Rep. Mike Pence of Indiana announced Thursday that he will not seek the 2012 Republican presidential nomination. He suggested instead that he may seek the office of Indiana governor.

"In the choice between seeking national office and serving Indiana in some capacity, we choose Indiana," Pence said in a letter to supporters, according to the Indianapolis Star. "We will not seek the Republican nomination for president in 2012."

A member of the House Republican leadership, Pence has traveled the country helping GOP candidates raise money and establishing his fiscal and social conservative brand. The six-term congressman had been seen as someone who could potentially consolidate the support of the Tea Party movement as well as social conservatives in a presidential race.

Pence has been urged to seek the presidential nomination by Tea Party figure and former House majority leader Dick Armey. In the fall he won the straw poll at the socially-conservative "Values Voters Summit" of potential 2012 presidential candidates.

Pence, 51, did not say explicitly he would seek the governorship -- but the Star writes that "by not running for president it is considered a virtual certainty that he will run for the GOP nomination for governor." He wrote in his letter to supporters he feels his "calling is closer to home" and said he plans to crisscross Indiana "to listen and learn about how Hoosiers think we might best contribute in the years ahead."

"I have learned to follow my heart, and my heart is in Indiana," Pence wrote in the letter.

If he wins the governorship, Pence will succeed term-limited Republican Gov. Mitch Daniels -- who has also been discussed as a potential 2012 presidential candidate. He would likely go into the race as the clear frontrunner.