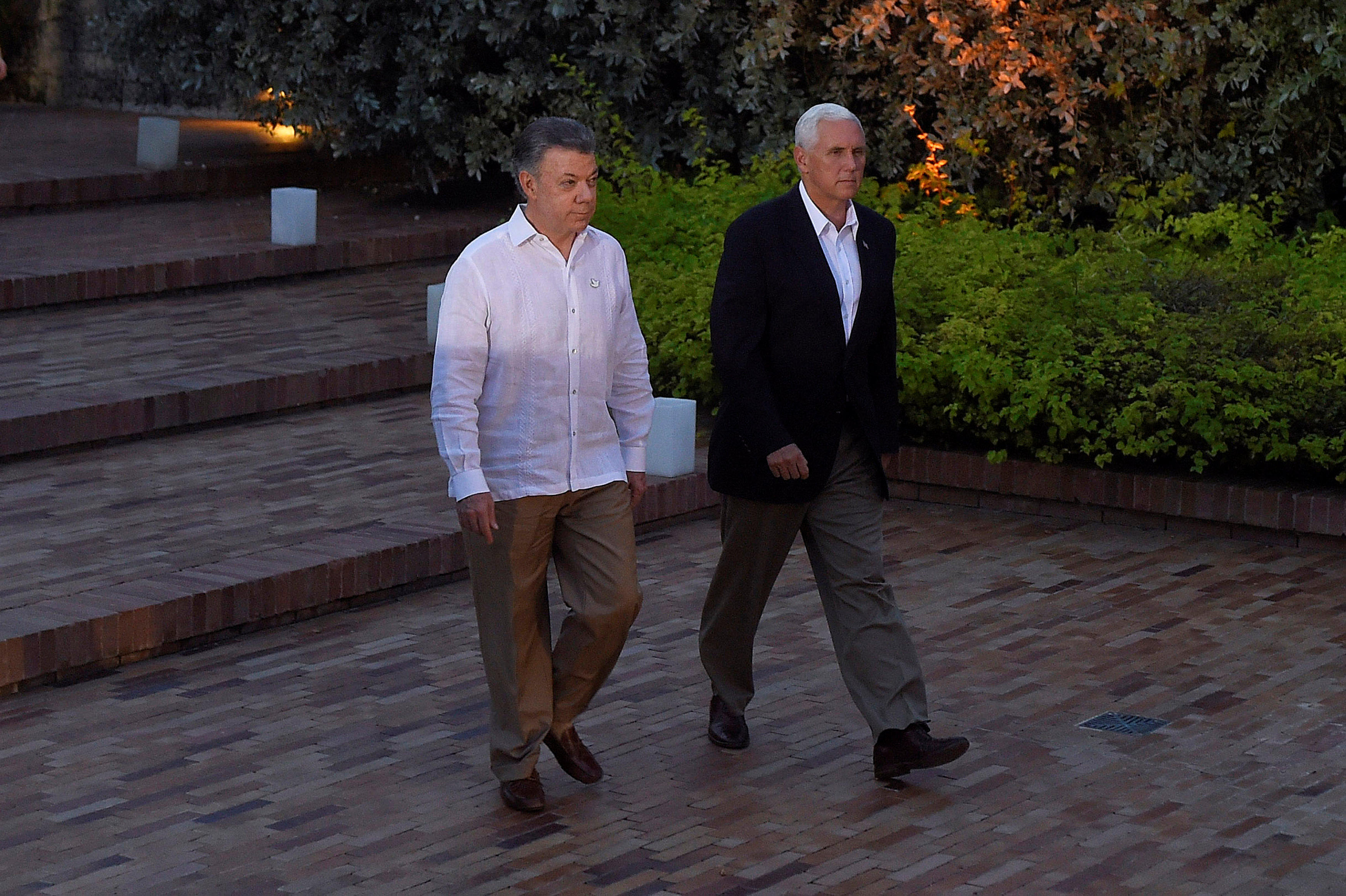 CARTAGENA, Colombia -- Vice President Mike Pence is demonstrating the delicate balancing act that has thus far defined his term, walking a line during a trip to Latin America between the region's opposition to possible U.S. military intervention in Venezuela, and President Donald Trump's surprising refusal to rule out that option.

Speaking during a joint news conference with Colombian president Juan Manuel Santos shortly after his arrival Sunday, Pence also declined to rule out possible military action against Venezuelan President Nicolás Maduro, whose efforts to consolidate power in the country have drawn alarm. Still, Pence stressed the U.S. would much prefer what he called a "peaceable" solution to the growing political and humanitarian crisis.

"President Trump is a leader who says what he means and means what he says," Pence said. "But the president sent me here to continue to marshal the unprecedented support of countries across Latin America to achieve by peaceable means the restoration of democracy in Venezuela, and we believe it is achievable by those means."

Mr. Trump's startling comments Friday sparked backlash across the region, including from Venezuela's chief opposition coalition and the Colombian government.

Standing at Pence's side in Cartagena after the two met, Santos said he had repeatedly told Pence in no uncertain terms that the U.S. must not even consider military action in response to Venezuela's crisis.

The two countries are important allies, Santos said. "But since friends have to tell each other the truth, I have told Vice President Pence that the possibility of a military intervention shouldn't even be considered, neither in Colombia nor in Latin America," Santos said through a translator. "America is a continent of peace. It is the land of peace. Let us preserve it as such."

Analysists said Mr. Trump's comments played into Maduro's hands by awakening dark memories of U.S. intervention in the region and making it harder for other Latin American countries to join the anti-Maduro coalition. "The phantom of military interventions in Latin America disappeared a long time ago, and we don't want it to return," Santos said.

Pence emphasized the U.S. will work together with many nations in Venezuela's "neighborhood" to pressure Maduro so that democracy can be restored. "We simply will not accept the emergence of a dictatorship in our hemisphere," he said, continuing the tough talk that has been Mr. Trump's approach to Maduro. "The United States will not stand by as Venezuela crumbles," he said.

Pence also addressed the deadly violence that broke out Saturday during a march by white supremacists in Charlottesville, Virginia, using words the president would not. "We have no tolerance for hate and violence, white supremacists or neo-Nazis or the KKK," Pence said. "These dangerous fringe groups have no place in American public life and in the American debate, and we condemn them in the strongest possible terms."

Mr. Trump has been criticized by both Democrats and Republicans for not singling out those groups directly in a lengthy Saturday statement and instead blaming "many sides" for the violence.

Venezuelan Vice President Tareck El Aissami lashed out at Pence, rejecting what he called "interventionist" comments intended to hide the failure of US anti-narcotics policies in Colombia. He dismissed Pence's meeting with Santos as "an encounter between the world's largest producer of drugs and the nation with the most consumers."

El Aissami was sanctioned by the Trump administration in February for allegedly running a drug trafficking network of corrupt officials in Venezuela.

Pence and his wife, Karen, arrived Sunday in Colombia for a six-day, four-country trip through the region. Pence has other stops scheduled in Argentina, Chile and Panama, giving speeches and meeting with leaders.

White House officials tried Sunday to explain Mr. Trump's decision to raise the prospect of possible military action in Venezuela. CIA Director Mike Pompeo said Trump was trying "to give the Venezuelan people hope and opportunity to create a situation where democracy can be restored." Pompeo told "Fox News Sunday" that Venezuela "could very much become a risk" to the U.S. if it descended into further chaos.

Yet a Republican on the Senate Armed Services Committee who calls himself "a pretty hawkish guy" expressed skepticism about the idea of American troops in Caracas.

"I have no idea why we would use military force in Venezuela. I'm open-minded to a reason, but at the end of the day, our military should be deployed when there's a national security interest that can be articulated to the American people," South Carolina's Lindsey Graham told "'Fox News Sunday."

Mr. Trump's national security adviser, who has previously warned against military talk, said the Trump administration wants to get a handle on the current situation under Maduro's embattled government and "understand better how this crisis might evolve."

"The president never takes options off the table in any of these situations and what we owe him are options," H.R. McMaster told ABC's "This Week."