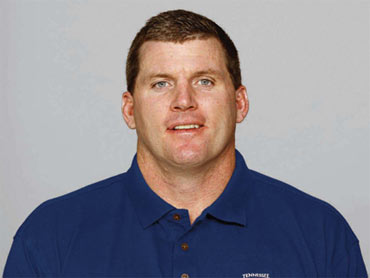 NASHVILLE, Tenn. - The Tennessee Titans have hired Mike Munchak as the franchise's 16th head coach, deciding to promote from within to replace Jeff Fisher.

Owner Bud Adams Monday called the move a special day for the franchise; Munchak's becomes the first former player to coach the team.

"Mike has been successful at everything he has been associated with at our franchise and I have no reason to believe that he won't be successful as our head coach," Adams said in a statement. "He earned Hall of Fame distinction as a player and yearly he has been one of the best offensive line coaches in the NFL. He understands where we have been and knows where we need to go."

Munchak, a favorite of Adams, was the first man interviewed to replace Fisher and had been considered the top candidate.

This will be the first head coaching job for Munchak, who turns 51 in March, with the only franchise the offensive line coach and Hall of Fame lineman has ever played or worked for since being selected eighth overall by the then-Houston Oilers in 1982.

But Munchak is well respected in the franchise.

Reinfeldt, a former teammate, called Munchak a smart football man who commands respect and accountability. The general manager said in a statement he is confident Munchak will be successful.

"He has seen this franchise from different angles as a player and a coach and has seen the team built and rebuilt in many different ways to achieve success," Reinfeldt said. "His franchise knowledge will be a great asset moving forward. This is a positive situation for us because he has a strong foundation built with us, but he has his own beliefs about how he wants his team to play."

Coming out of Penn State, the left guard blocked for fellow Hall of Famers Earl Campbell in a pounding run game to the run-and-shoot offense with Warren Moon. He played 159 regular season games with the Oilers before retiring in 1994, and he became the fifth player from the franchise inducted into the Hall of Fame - the first to spend his entire career with Adams' team.

Munchak also had the club record with nine Pro Bowl berths during his career. Adams retired Munchak's No. 63 in 1996, joining Campbell, Jim Norton and Elvin Bethea in rare company with that honor.

He went to work almost immediately as a coach at the entry-level position as quality control assistant with the offensive staff through 1996. Fisher promoted Munchak to offensive line coach in 1997, and Munchak held that job the past 14 seasons.

A skilled teacher and technician, Munchak has only had the same starting five offensive linemen from one season to the next twice during his 14 seasons. But he has had four players earn 10 total Pro Bowl invitations while blocking for five different running backs in 11 1,000-yard seasons.

That includes bruising running backs like Eddie George, Travis Henry and LenDale White to speedsters like Chris Brown and now Chris Johnson. Munchak's line blocked for Johnson in 2009 when he became only the sixth man in NFL history to run for at least 2,000 yards.

With Munchak coaching the offensive line, the Titans allowed the second fewest sacks in the NFL with 28.3 sacks per season and ranked seventh in the league in that time averaging 124.5 yards rushing per game.