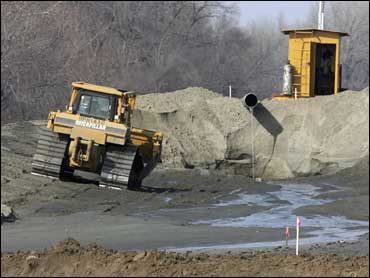 With the prospect of another season of spring flooding fast approaching, the Army Corps of Engineers insists the earthen flood levees outmatched by the Mississippi River last summer are rebuilt and ready.

Not everyone's so sure.

It was nearly nine months ago that floodwaters neared and, in some cases, obliterated record levels reached in the Great Flood of 1993, something many Midwesterners figured they'd never see again. The Mississippi and its tributaries pummeled levees protecting towns and farmland from Iowa south through St. Louis. Despite feverish sandbagging, dozens of the earthen structures were breached or overtopped.

Corps officials say holes in the levees are fixed, in many cases with dirt hauled in and tightly packed down in layers, then sodded or seeded so grass can blunt any erosion.

All told, the Corps has spent about $64 million so far to fix breaches in about 70 levees in Iowa, Illinois and Missouri.

"It should give them (those protected by levees) a certain level of confidence," says Alan Dooley, a spokesman for the Corps' St. Louis district.

But Dooley and others with the Corps say much mechanical work remains, from fixing pump houses to replacing drains. In areas where those upgrades are unfinished, pumps quickly can be hustled in if another flood threatens, Dooley says.

That's little comfort for those responsible for the levees, especially since early spring is the rainiest and most flood-prone time of the year. Levee officials in the hardest hit states - Iowa, Illinois and Missouri - believe the Corps is moving too slowly to fix the infrastructure.

"We're very concerned," says Stan Rolf, president of the levee district at Winfield, Mo., where a burrowing muskrat caused the breach that eventually flooded 100 homes with Mississippi River water and damaged nearly 2,000 acres of farmland. "Every farmer is concerned about it. It's our livelihood."

At least for now, the weather outlook appears far more favorable than a year ago, when national flood specialist Bob Holmes with the U.S. Geological Survey says there was "the perfect setup" for big trouble.

That winter's meltoff from massive snowstorms in the Upper Mississippi Valley elevated the Mississippi and its tributaries. Persistent rains saturated the soil. All of it came to a head in June, when a storm dumped more than 10 inches of rain in some stretches of Iowa and Wisconsin.

"We're not looking at nearly the potential of flooding this year," says Mark Fuchs, a National Weather Service hydrologist. "But there's always the disclaimer: If we have a big (rainfall) event we could always see significant flooding."

Levees in some towns took a pounding in 2008 but suffered little damage. In many communities, including Hannibal and Canton in northeast Missouri, officials say the Corps already has completed mostly minor repairs.

"They do a good job, they really do," Canton Mayor Joe Clark says of the Corps.

Others say the Corps is moving too slowly to make sure areas protected by levees are safe, and that fixing holes is only part of the solution. 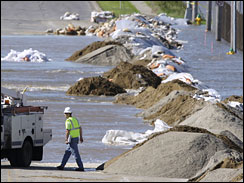 That gaping hole is fixed, but much work remains.

"I guess I would differ with the idea that everything is fine and good-to-go," he says. "My concern is that if our spring is a replica of last spring, then we will be in the same circumstance again. I know there's finances available, I know the desire's there, I know the plan is there to fix the levees."

"We're just stalemated, waiting on them to act," he says. "It just seems like nobody is moving on it."

In northwest Illinois, Marty Lafary is rattled. Henderson County's board chairman saw the Mississippi get the better of one of the local levees last June, swamping the tiny village of Gulfport. What exactly happened to the levee is debated; Lafary argues the earthen wall long was unstable and finally broke, though Corps officials say the river simply topped it and ate away at the levee until it gave way, submerging tens of thousands of acres of farmland and one-third of the county's tax base.

Although the Corps has fixed the levee, Lafary is leery about the stability of the wall built decades ago on an old railroad bed. He says he's "afraid" railroad ties in the levee could shift if the river ever raged again, catastrophically weakening the wall.

"If the water got up as high as it did, I would be quite worried about it," he says, pressing for the levee to be higher and wider. "If the Corps just came and reinforced the toe of that levee with sand and reinforced it, I wouldn't have a problem with it. But where it just sits on the railroad bed, I have an issue."

About 45 miles south of Gulfport, in Adams County, Ill., two levees in separate districts couldn't hold back the Mississippi, ultimately submerging tens of thousands of acres of farmland and devastating Meyer, a hamlet of a few dozen people. 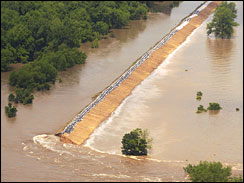 (AP Photo/Paul Beaty)
One of those levees - in the Indian Grave Drainage District north of Quincy (left) - still is being mended, with that work expected to be done by the end of this month.

"It's not going to be better than it was before the last two floods we had" in 1993 and last year, "and I think that's a huge mistake," says David Shaffer, the levee district's commissioner. "If the government would just get busy and get a project going to where they build everybody's levees up to withstand these high-water events, everybody would be better off."

Dooley says rebuilding a levee bigger and wider isn't an option in most cases. The agency is authorized to repair compromised levees only to their previous levels of protection. That is, the Corps can't rebuild them higher or wider without Congressional approval and funding.

"We have to work within this system," Dooley says.

In Winfield, Mo., about 50 miles north of St. Louis, the Corps has fixed a levee done in last summer by a meddlesome muskrat that created a hole just big enough to let water in. Within minutes, that small hole became a breach, foiling the Missouri National Guard's around-the-clock sandbagging push to protect 100 homes.

Now, Rolf and Mayor Harry Stonebraker worry the unfinished infrastructure work including problematic drains could spell disaster if another flood hits this spring.

But in the end, much of it just comes down to luck, says John Simon, the emergency management chief in Illinois' Adams County.

"Fighting off Mother Nature," he shrugs, "sometimes it just can't be done."