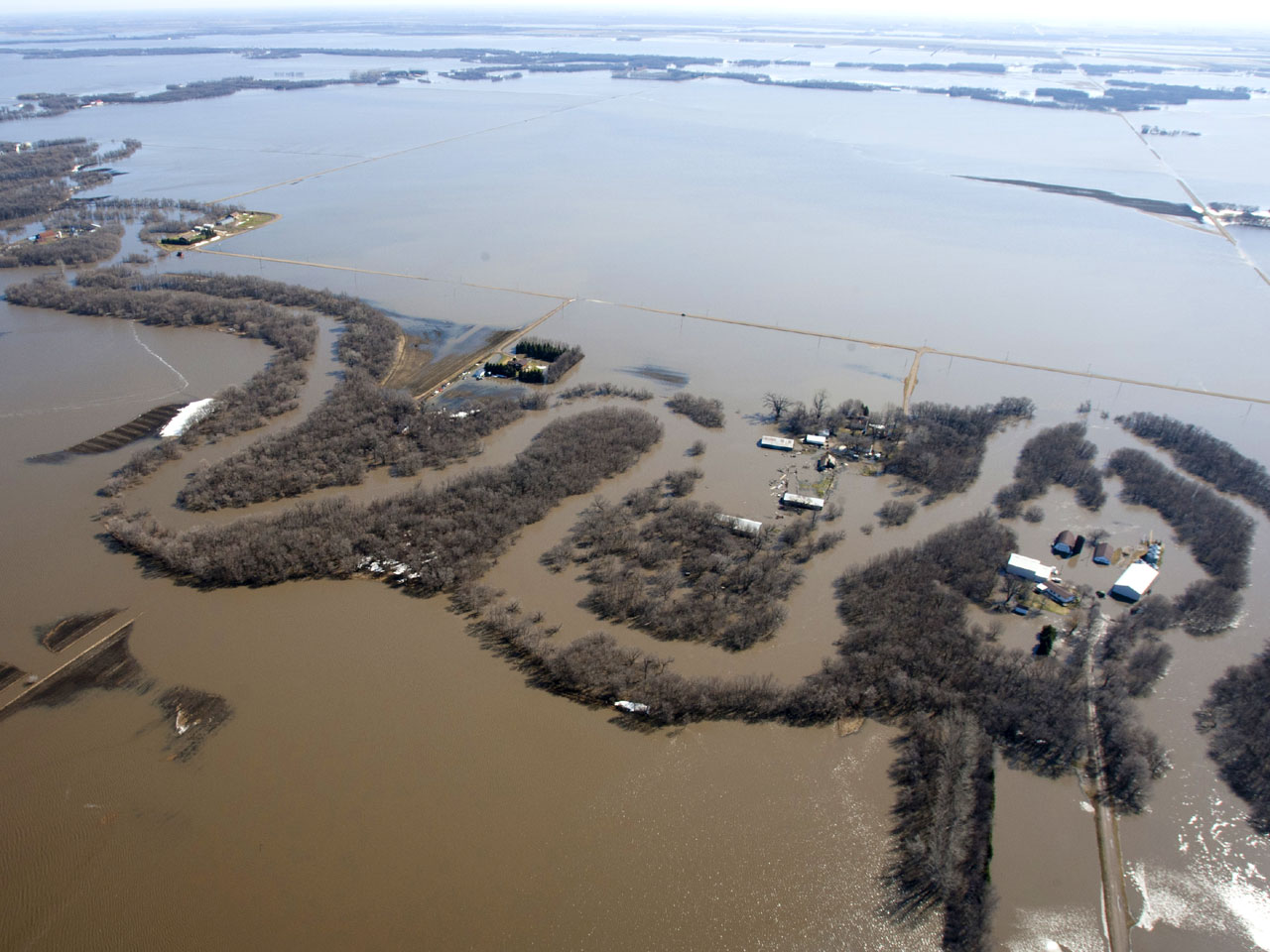 Cass County Sheriff Paul Laney says no major incidents were reported overnight. He says the National Guard is helping some people who had minor issues with power generators.

Laney says police discovered a car that was reported stolen and wound up in a flooded ditch.

Officials continue to monitor high water in Cass County, and Laney says good news might be on its way: the Sheyenne River is holding its banks south of Fargo, which should allow water to drain faster once the Red River crests north of town.

Meanwhile, residents in North Dakota's most populous county were finding new ways to get around Monday as floodwaters put two small towns "under siege" and closed more than 60 miles of county roads. The state's governor was caught in rural traffic detoured by flooded roads.

The north-flowing Red River crested in Fargo and neighboring Moorhead, Minn., over the weekend at 38.75 feet, the fourth-highest flood on record. Officials said the levees were holding in the two cities and offered to help with unprecedented flooding in Cass County directly north of Fargo.

The largely rural territory is dotted with small towns, many with just a few hundred residents, and National Weather Service meteorologist Greg Gust said record flows in the Sheyenne, Maple and Rush rivers have led to unparalleled overland flooding.

"The area from Harwood to Argusville is under siege, more than it probably has been in history," North Dakota Gov. Jack Dalrymple said Monday.

Road closures were making life difficult for county residents, including commuters who normally use Interstate 29 to get to work in Fargo. More than 30 miles of the interstate remained shut down from north of Fargo to Hillsboro. State transportation officials said roads that have never flooded before are now under water.

Dalrymple blamed his late arrival for a Monday morning flood briefing on a rare rural traffic jam. His home is 15 miles east of Fargo in Casselton, which was the turning point for an I-29 detour.

"The traffic in Cass County is not moving at the normal pace this morning," the governor said.

Valerie Verwest, who lives near Argusville and works in Fargo, took a county road into the city instead of her normal interstate route.

"There was a lot more traffic going that way," she said. "But it really didn't take me any longer."

A handful of people were rescued Sunday in Cass County, and county and Coast Guard air boats were on standby Monday, but no new evacuations were reported. Coast Guard officials said they suspended routine checks on flooded properties because of the fear the wave action could damage levees.

Authorities moved two airboats into place for a possible rescue Monday near Grandin, but that was called off when they found out the family just wanted some items moved from the basement to the main floor. Firefighters helped the family move a freezer.

The weather service said the Big Sioux River and James River in South Dakota continued to flood farmland but had crested and were receding with no threat to towns or personal property.

In North Dakota, Cass County engineer Keith Berndt said water was "dropping a bit" in Argusville and nearby Harwood, but flood levels will remain high for a long time. Work was being done Monday to reinforce levees in the Minnesota towns of Perley, Halstad and Hendrum. Authorities urged residents stranded by floodwaters to plan ahead if they need medical supplies or other help.

"Please keep in mind it will take people a while to get to you," Cass County Commissioner Darrell Vanyo said. "One of the rescues we had was 5 miles one way with an airboat."

It was less hectic in Fargo and Moorhead. Fargo was removing clay levees and opening bridges that cross drainage areas. Moorhead officials announced that its city golf courses would open Tuesday.