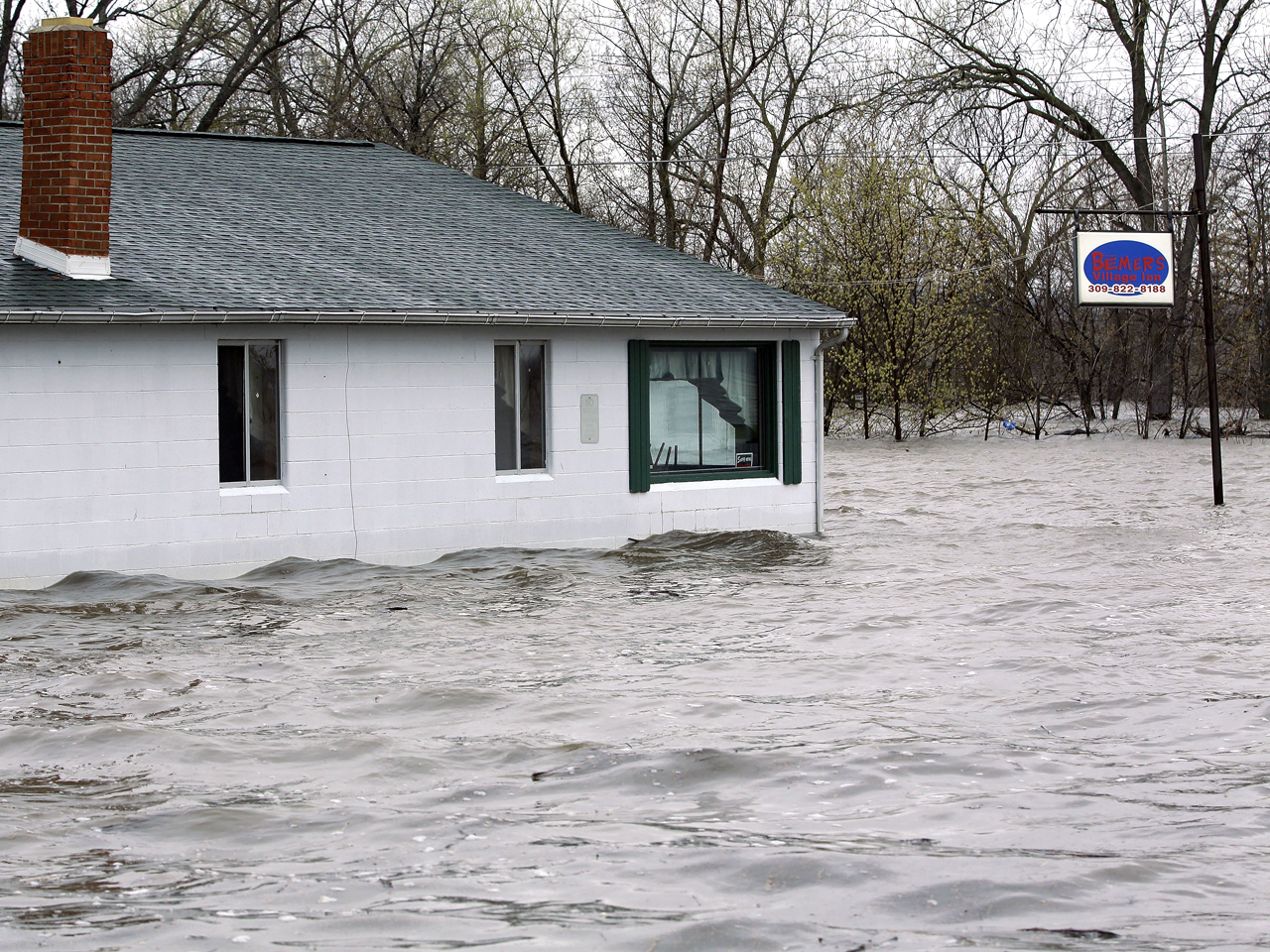 PEORIA HEIGHTS, Ill. Flood-weary residents fortified their homes against the rain-swollen Illinois River and considered whether to stand their ground as waterways remained in flood stage across the Midwest.

Even as some of the renegade rivers showed signs of cresting, forecasters said the recovery would not be fast or easy. The National Weather Service expected many of the waterways to remain high into next month, straining levees during the river's expected slow descent.

CBS News correspondent Dean Reynolds reports that nobody is talking about the nearly two-year-long drought in Annada, Mo., anymore, not after April showers fell on 10 out of the last 15 days. That part of the Midwest has received three times the normal April rainfall.

Farmer Louis Busch showed Reynolds a levee that bears the consequences of all that water. It's now pouring over the top, threatening 2,500 acres, and he's not just talking about sodden soybeans. The town, the railroad and the highway would all be submerged if the water keeps coming.

"It would be just up to our eyes," Busch told Reynolds. "That's how deep it would be."

The biggest troubles were in Illinois. Officials in Peoria said the Illinois River finally crested Tuesday at 29.35 feet, eclipsing a 70-year record. The river flooded roads and buildings in Peoria Heights, and inundated riverfront structures. Firefighters feared that if fuel from businesses and vehicles starts to leak into the floodwaters, a fire could be sparked in areas accessible only by boat.

"That's our nightmare: A building burns, and we can't get to it," Peoria Heights Fire Chief Greg Walters said. "These are combustible buildings, and we have no access to them simply because of the flooding."

About 20 to 30 homes and businesses near the river have been evacuated, he said.

Among those still in their homes was Mark Reatherford. The 52-year-old unemployed baker has lived for decades in the same split-level home with a view of a small park and beyond that the Illinois River. But by Tuesday afternoon, as a chilly rain fell, the river had rolled over the park and reached Reatherford's home, creating a 3-foot-deep mess in the basement. He cleared out the basement furniture and was hoping the main floor would stay dry.

But he hadn't dismissed the idea of abandoning his home in Peoria Heights, about 150 miles southwest of Chicago.

"You can't get a better view than what we've got here," he said. But "I'm getting too old to deal with this."

In a nearby neighborhood, retired Caterpillar crane operator Roland Gudat spent much of Tuesday afternoon on his porch swing, looking out with marvel toward the Illinois River that had swamped houses down the street but largely spared his home of 46 years. The 73-year-old said he had pumped hundreds of gallons of water from his basement that had seeped up from the saturated ground.

Gudat remarked that he'd never seen the river so high, but nonetheless he could not tolerate the gawkers who traipsed past his property to stare at the destruction. He and his neighbors placed saw horses in their driveways to prevent the sightseers from using their property to turn around, forcing them to reverse back down the road.

"I told them this isn't a damn cul-de-sac," he said. "If they knock those saw horses over, I'm gonna turn their keys off and call the cops. Don't come here and bug people in misery."

In downtown Peoria, tens of thousands of white and yellow sandbags stacked 3 feet high lined blocks of the city's scenic riverfront, holding back floodwaters that already surrounded the visitors' center and restaurants in the 114-year-old former train depot. Across the street, smaller sandbag walls blocked riverside pedestrian access to Caterpillar's headquarters and the city's museum.

In nearby Chillicothe, more than 400 homes have been affected by the flood, said Vicky Turner, director of the Peoria County Emergency Management Agency. Many homes have been evacuated, but others whose owners have had their buildings raised over the years because of flooding have chosen to stay put, Turner said.

Elsewhere, there were snippets of good news. Lucas Schultz, a 12-year-old Smithton, Ill., boy who was rescued Sunday from the raging Big River near Leadwood, Mo., and revived by his rescuer was at home Tuesday and doing fine.

The Mississippi still hasn't crested in Dutchtown, Mo. In recent days dozens of members of the Missouri National Guard have assisted in a feverish and so far successful sandbagging effort to protect the 100-resident town 110 miles south of St. Louis.

In Indiana, floodgates have been installed to keep the Wabash River from overrunning Vincennes, which was founded in 1732. Some strategic spots in the state's oldest town have been reinforced with sandbags. The weather service projected a crest on Saturday about 12 feet above flood stage, the highest reading in nearly 70 years.

The Grand River at Grand Rapids, Mich., which reached record levels in recent days, has receded about 2 feet. Weather officials said it was expected to fall below flood stage Thursday. It was unclear when the hundreds of people evacuated from their homes would be able to return.

In Saginaw County, Mich., water topped the dike at Misteguay Creek in Spaulding Township. Businesses and homes were flooded along the Tittabawassee River, a Saginaw River tributary. Part of Shiawassee National Wildlife Refuge also was under water.