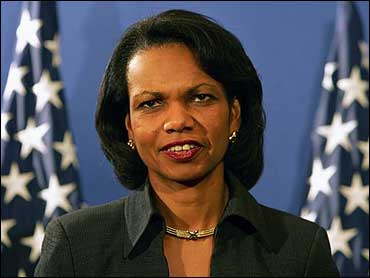 An international diplomatic drive for Mideast peace gained momentum Monday, with Israel welcoming the idea of a regional peace summit and Saudi Arabia suggesting it would consider changes in a dormant peace initiative to make it more acceptable to Israel.

The new developments came at a time of high-profile diplomacy, with the U.N. chief Ban Ki-Moon and Rice both in the region for talks with Israeli and Arab leaders.

The international officials are trying to break an impasse following formation of a Palestinian unity government that includes the Hamas militant group. Immediately after the government was formed, Israel ruled out peace talks with the Palestinians until Hamas explicitly recognizes the Jewish state.

But on Monday, Israeli Prime Minister Ehud Olmert said he "wouldn't hesitate" to take part in a regional summit. Palestinian officials cautiously endorsed the idea, though they expressed concern that Israel was looking to improve ties with the Arab world without resolving the Palestinian issue.

Any regionwide meeting — especially if Saudi and Israeli officials were to publicly meet — would be a huge symbolic breakthrough. The two countries do not have diplomatic relations, though Saudis and Israelis are believed to have met privately in the last year.

After talks with Israeli and Palestinian officials on Sunday, Rice traveled to Amman, Jordan, for a second meeting with the moderate Palestinian president, Mahmoud Abbas of Fatah, and separate talks with King Abdullah II of Jordan.

"Some good things are there. We just have to put them together," Rice said before returning to Israel, where she was to meet for a second time with Olmert, too.

"We have established a basis among all of the Arab states, as well as Palestinians and Israelis, that a two-state solution is the way to peace," Rice said.

In a separate statement issued by the Jordanian palace, Abbas expressed optimism. "Things are moving forward," he said without elaborating.

A senior U.S. official traveling with Rice said Monday that one idea that is being pursued is to bring Israel and the Palestinians together as part of wider talks involving moderate Arab countries and the "Quartet" of Mideast peacemakers — the U.S., European Union, U.N. and Russia.

The Arab countries involved in the efforts would include Egypt and Jordan, which both have peace agreements with Israel, as well as Saudi Arabia, which does not.

"It's a good idea that's out there," the U.S. official said, adding it was "premature" to schedule a meeting. He said talks were taking in place in Washington and Arab countries.

"The options are being looked at for how you have a more active Arab-Israeli track," he said, speaking on condition of anonymity because the proposal hasn't been formally unveiled.

At a joint news conference with Olmert in Jerusalem, Ban confirmed that consultations on bringing the many parties together were "ongoing," but said further talks were needed.

Olmert said he would look at an invitation to such a summit "in a very positive manner."

The signs of progress came ahead of an Arab summit in Saudi Arabia this week, where the Saudis are expected to relaunch a 2002 proposal calling for a comprehensive peace deal between Israel and the Arab world.

Israel rejected the plan when it was first launched, objecting to its calls for a full withdrawal from all territories captured in the 1967 Mideast War, including east Jerusalem.

Israel also strongly opposes the plan's endorsement for the right of large numbers of Palestinian refugees and their descendants to return to properties in what is now Israel. Israel says a large-scale return of refugees would spell the end of the country's character as a Jewish state.

But recently, Olmert and other Israeli leaders have said the Saudi plan could be a good starting point for negotiations.

In Riyadh, Saudi Arabia's foreign minister suggested Monday that Arab leaders would be willing to consider changes in the 2002 peace offer to make it "compatible" with new developments.

"It is expected from us to take notice of new developments, which require additions and developments," al-Faisal said.

"The kingdom is keen that this summit should come out with one Arab voice toward issues of destiny, and in particular the Palestinian issue," he added.

Arab leaders had previously publicly rejected Israeli calls for them to make changes to the peace offer.

Rice is thought to have been strongly pushing the Arab countries to offer some hope of changes in the plan, during her tour of the Mideast this week.

While comprehensive peace talks between Israel and the Arab world are likely far off, the idea could appeal to all of the parties involved.

The proposal could allow Israel and Abbas to sidestep problems that have hindered bilateral talks while essentially ignoring Hamas. With its troubles in Iraq, the United States is eager to bolster its standing in the region, and moderate Arabs are eager to counter the rising strength of Iran, Hamas' sponsor.

Hamas, for its part, has said it would allow Abbas to conduct negotiations with Israel, though it has given no indication that it would accept a peace agreement.

Saeb Erekat, an Abbas aide, said Abbas had affirmed to Rice "our commitment to the Arab peace plan." But he said the focus should remain direct talks between Israel and the Palestinians.

Mustafa Barghouti, the spokesman for the new Palestinian unity government, expressed concern that Israel would use regionwide talks to avoid dealing with the Palestinians.

"We warn here against an Israeli attempt to have normalization before resolving the Palestinian issue," he said.

Ziad Abu Amr, the new Palestinian foreign minister, said he was confident the Saudi proposal would not be changed. "There was not and will not be any amendment to the initiative," he said.