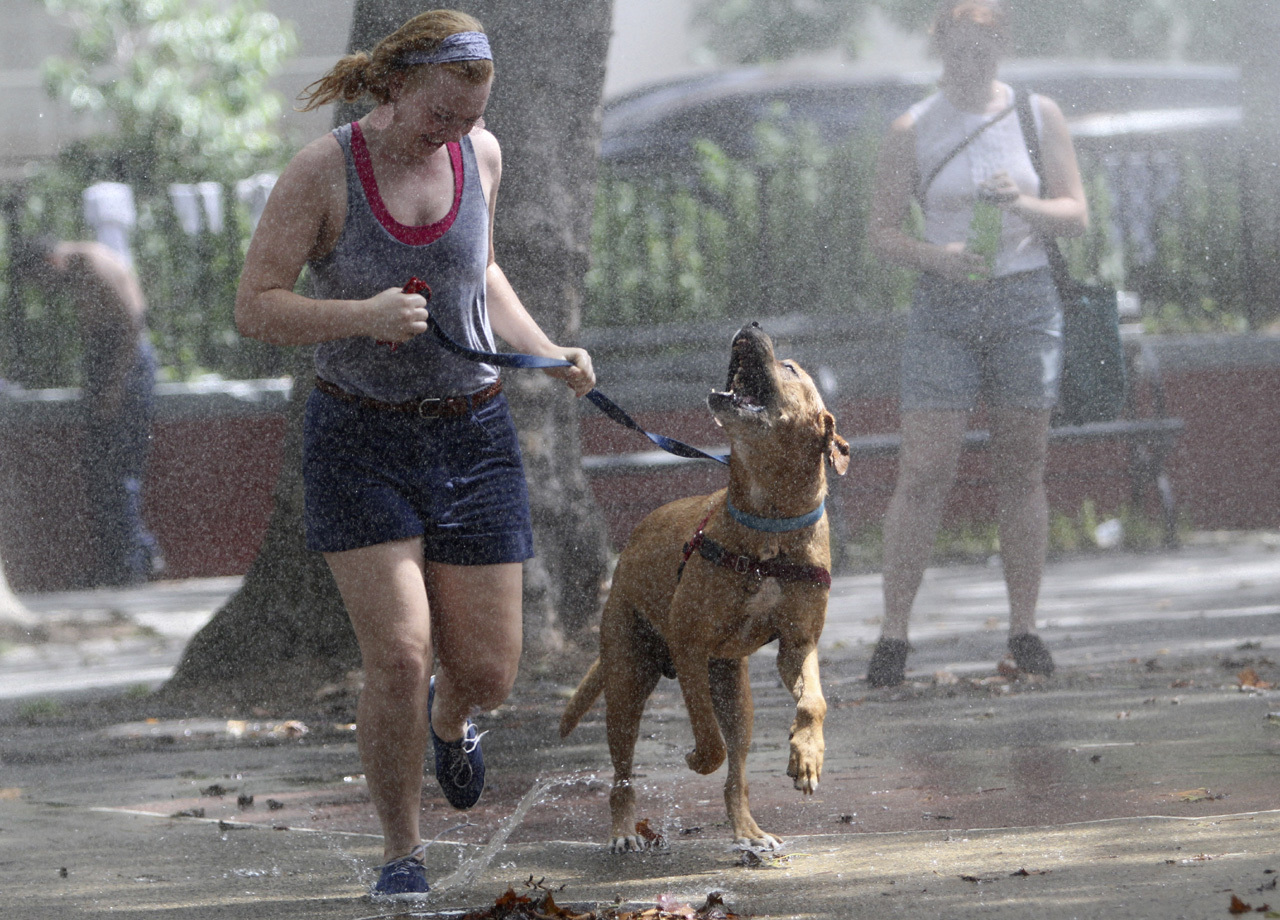 NEW YORK — The triple-digit heat that made life uncomfortable on the U.S. East Coast was expected to simmer down somewhat Sunday, but forecasters said states in the mid-Atlantic and Southeast will still be feeling the heat wave.

"Monday is really when we see cooler air coming," he said, with forecast temperatures sinking to the low- to mid-80s F (upper-20s C).

Temperatures reached 105 degrees F in Atlantic City, New Jersey; 104 F in Trenton, New Jersey; 103 F in Norfolk, Virginia; 102 F in Baltimore, Newark, New Jersey, and at Ronald Reagan Washington National Airport and New York's Kennedy Airport; and 101 F in Philadelphia. But humidity made it feel hotter in most places across the region.

The bubble of hot air developed over the Midwest earlier this week and has caused more than a dozen deaths as it moved eastward. As of Saturday, the medical examiner's office in Chicago listed heat stress or heat stroke as the causes of death for eight people.

In New York's Times Square, tourists crowded into patches of shade along a baking Broadway, where Tony Eckinger was selling spray bottles with fans attached for $30. He had bought them at a drugstore earlier in the day for $15.

"All the stores here are sold out," Eckinger said. "Everybody's trying to keep cool."

Nearby, Gordon Miller waited in the sun as his family bought theater tickets at a discount booth.

"I told them I don't care what we see," said Miller, of Peebles, Scotland. "Getting inside and getting cool, that's the idea."

In south-central Pennsylvania, authorities said a man in York died Friday of hyperthermia, or overheating, in an unventilated apartment where the temperature had reached 110 degrees. A 94-year-old man in Carroll Township died after his air conditioner stopped working because of a tripped circuit breaker.

In northwest Philadelphia, a 67-year-old man was found dead Saturday afternoon in his Germantown home that had closed windows and no air conditioning. A health department spokesman said the man died of a combination of the high temperature and cardiovascular disease.

On Saturday morning, commuter trains were packed as thousands of New Yorkers headed to beaches on Long Island or in New Jersey. Four city beaches were under a pollution warning after a fire earlier in the week at a wastewater plant forced officials to dump millions of gallons of raw sewage into the Hudson River.

About 10,000 customers remained without power in New York City and its suburbs, and about 9,000 in New Jersey, after parts of the region's electrical network failed. Power utility Con Edison said it was reducing the voltage in 69 other New York neighborhoods to ease the load caused by thousands of air conditioners running.

In Manassas, Virginia, 11 people who attended a Civil War reenactment to mark the 150th anniversary of the Battle of Bull Run, the first major land battle of the U.S. Civil War, were taken to hospitals for heat-related illnesses, but none of them was believed to be critically sickened, said Joseph Robertson, battalion chief for the Prince William County fire and rescue service.