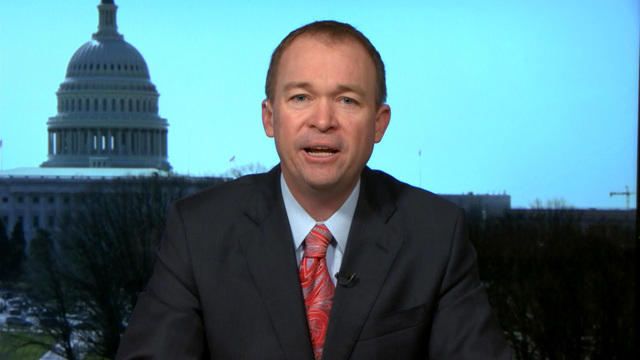 In an interview on “CBS This Morning,” the former GOP congressman from South Carolina claimed that the plan would cover more people with insurance.

“We think the system that the House introduced last night, that we worked with very closely with the House in support, actually provides more affordable health care for people so when they do get sick, they can afford to go to the doctor,” Mulvaney said.

The bill includes tax credits that would be available in full to individuals making under $75,000 a year and families making under $150,000. Mulvaney said the measure is “designed to assist people who don’t get coverage at work.”

It also includes a penalty for a lapse in coverage, which Mulvaney said is called “continuous coverage,” which he said will give people an incentive to go and sign up for their plan immediately instead of waiting until after they get sick.

Republicans introduced the legislation Monday evening before the Congressional Budget Office could provide a cost estimate of the measure. Mulvaney said that people at OMB and the Department of Health and Human Services crunched their own numbers.

“We don’t expect the Congressional Budget Office to give us any numbers for the next couple of days,” he said.

In terms of dealing with preventative care, Mulvaney said the bill includes a “dramatic expansion of health savings accounts” and people would be able to increase where they use them.

ASPCA spending may not be what donors expect, investigation finds
Rebecca Shabad