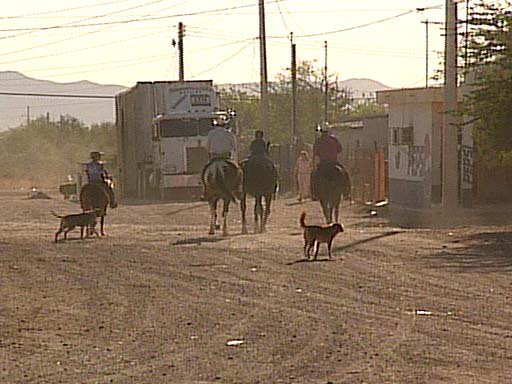 The gymnasium was stifling, the questions even hotter as Al Gore went looking for good campaign-commercial footage and found, instead, the specter of Green Party candidate Ralph Nader.

At a town-hall meeting in the battleground state of Michigan, some 200 skeptically undecided voters also forced the vice president to defend his advocacy of the death penalty, his push for free trade with China, even his wife's decades-old drive for parental warning labels on music with obscene lyrics.

"Y'all are certainly asking easy questions this evening," he joked halfway through the nearly three-hour forum.

A film crew had outfitted the un-air-conditioned school gymnasium with studio lights to collect fodder for future campaign or Democratic National Committee TV commercials. Although there was praise for the vice president, some voter comment was far from flattering.

One woman sternly admonished: "It has felt to me like the Clinton-Gore administration gave an awful lot of ground back to the right and I would like to know why I should vote for you and not Ralph Nader. And don't tell me, 'Because I'll split the vote.’ That's not an answer."

That question plus another woman's counsel, "You ought to be acknowledging more that there are more than two candidates in this race," come at a time when polls suggest Green Party candidate Ralph Nader is a growing threat to Gore's support from the left, including in Michigan.

Gil Couillard, a special education teacher and union member, said he could never vote for Bush but was flirting with a vote for Nader. He said he was impressed with Gore as "very genuine," but didn't want to hear any evidence that Gore improperly handled his 1996 fund raising or he would vote for Nader.

"If I ever found out that (Gore) was in somebody's pocket, that would be it," he said.

While the Gore camp has recently made quiet entreaties to top Nader backers, Gore avoided speaking his rival's name in answering questions Thursday.

"The economic success that has come with the Clinton-Gore policies has helped working families far better than slogans, far more than rhetoric," Gore said.

In this working-class city 96 miles north of Detroit, where the national prosperity has not spread so thickly, several voters poked holes in Gore's proud record of economic success and complained of high taxes.

"We've had more jobs, but they're not as good jobs," one woman said.

An autoworker complained that Gore's support for free trade with China threatened to rob him of his job. Gore responded that he thought America and the autoworker were better off if the nation was open to free trade.

He defended his opposition to eliminating taxes on capital gains, saying that 90 percent of that kind of tax relief benefits only the small slice of America's wealthiest taxpayers.

"I understand the arguments of people who say that can have a chilling effect on the creative community. But I don't think it's fair for them to insist upon on open spigot to deprive parents of the chance to do that," Gore said.

A retired black minister, who voiced confidence Gore would win the White House, nonetheless chastised him for supporting the death penalty and insisted upon hearing Gore's plan for making sure that convicts on death row "get every access to prove they are innocent before they are killed."

Gore repeated a position he's had to air several times since the accuracy of death-penalty convictions and the efficient rate of executions in Texas under Bush's governorship have been called into question.

Gore said he supports legislation requiring the use of DNA evidence, when available, in capital cases, and also a moratorium on executions in states that find a high error rate in convictions. Illinois, where the governor has already imposed a moratorium, is the only example Gore gave.

Finally, before calling it a night and returning to Washington, Gore was asked to defend his very style.

One woman who indicated she likes Gore's politics said he's been so low profile as vice president that she's had to question whether he is "strong enough to compete."

"Where have you been for the past eight years?" the woman asked, as Gore chuckled.

He replied that the vice presidency is a "mixed blessing" that had forced him to take a back seat in order "to help him be the best president he can possibly be."

"Is it like the woman behind the man?" he said. "Well, you know, actually, I've learned a lot about some of those issues."