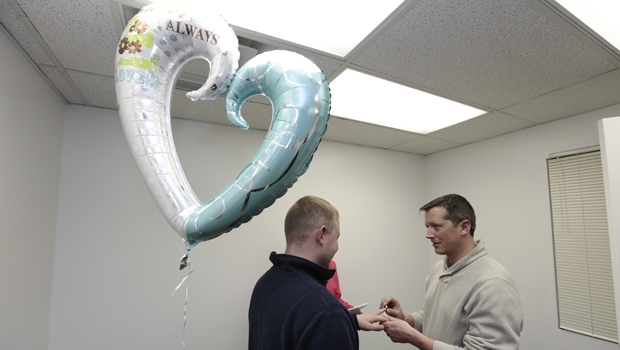 The 6th U.S. Circuit Court of Appeals in Cincinnati said it issued the stay because it needed more time to consider the state's appeal of a judge's ruling Friday overturning Michigan's constitutional ban on same-sex marriage. The court said its stay would last until at least Wednesday.

Earlier Saturday, dozens of same-sex couples in at least four Michigan counties wasted no time in getting hitched, uncertain of how the appeals court would act.

Two Detroit-area nurses who've been partners for eight years claimed the ban violated their rights under the U.S. Constitution. Nearly 60 percent of state voters in 2004 approved a constitutional amendment that recognizes marriage only as between a man and a woman.

Seventeen states and the District of Columbia issue licenses for same-sex marriage. Since December, bans on same-sex marriage have been overturned in Texas, Utah, Oklahoma and Virginia, but appeals have put those cases on hold.

The case in Michigan involves two Detroit-area nurses, Jayne Rowse and April DeBoer. They want to get married, but the original purpose of their 2012 lawsuit was to overturn Michigan's ban on joint adoptions by same-sex couples.

They are raising three adopted children with special needs at their Hazel Park home. But they can't jointly adopt each other's kids because joint adoption in the state is tied exclusively to marriage.

Rowse, 49, and DeBoer, 42, didn't testify, and the trial had nothing to do with their relationship. In fact, attorneys for the state told the judge that they are great parents.

Instead, the state urged the judge to respect the results of a 2004 election in which 59 percent of voters said marriage in Michigan can only be between a man and a woman. Conservative scholars also questioned the impact of same-sex parenting on children.

But experts testifying for Rowse and DeBoer said there were no differences between the kids of same-sex couples and the children raised by a man and woman. And the University of Texas took the extraordinary step of disavowing the testimony of sociology professor Mark Regnerus, who was a witness for Michigan.