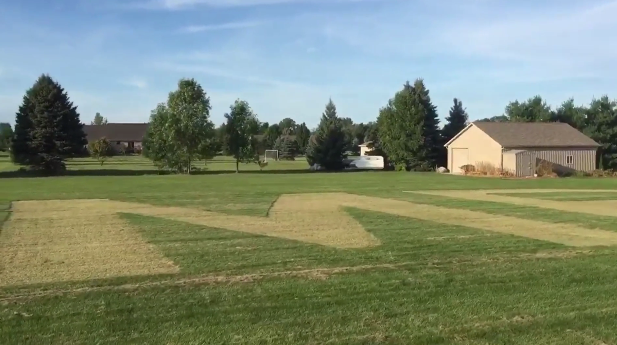 “I was cutting out there one day and I said, well, it would be pretty neat to put a sign in here,” explained Almont resident Wally Maslowsky to CBS Detroit. “Being that I’ve got a design background I just kind of came in the house and laid it out and plotted some points kinda like you’re doing a survey when you’re laying out a basement for a house.”

Maslowsky, a General Motors retiree, said the project took about four or five hours over the weekend to complete on his rural property, CBS Detroit reported.

“If you were to go from the front of the T to the back of the P, it’s 330 feet parallel; and top to bottom 176 parallel,” Maslowsky said, making the entire thing a little over 58,000 square feet.

Maslowsky, who has a standard Trump/Pence sign in his front yard, said he noticed a lot of support for the Republican nominee in the area.

“I decided, well, I could do this; so just for the heck of it I did it,” Maslowsky said. “I mean, that’s what retired people do to keep busy, right? …Either that or sit in front of the TV and get old.”

Maslowsky said he hadn’t really planned to promote his masterpiece, but his daughter-in-law posted pictures to Twitter.

“And I said, ‘well, you know, I didn’t do this for the news or anything, I’m not looking for any kind of publicity,’ and she says, ‘Well, why’d you do it?’ I said, just for fun, just to do it! Let the planes see it when they fly over.”