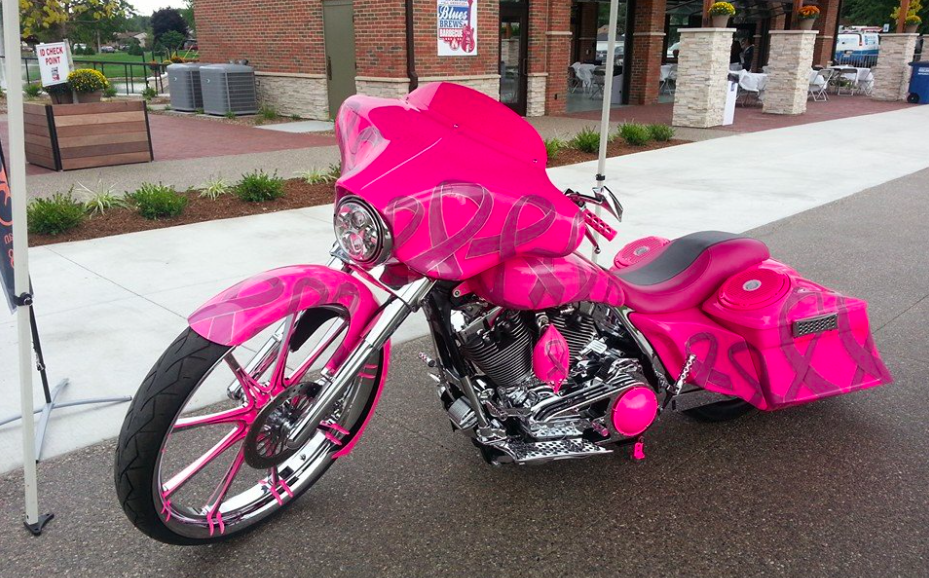 Before Jody Jendon lost his wife, Stacy, to breast cancer, he promised to build a bike in her memory.

The Michigan dad of three made sure he kept his promise.

"In the last few months of her life, we sat around and had a lot of time to sit and talk," Jendon told CBS News. "I said I was going to build a breast cancer bike -- so I did."

"Some people see a guy riding a pink bike and they can't believe it," he said. "But when they walk up and really see the bike, their story changes real quick."

Building and designing motorcycles has been Jendon's passion for as long as he can remember. He has been building bikes at Reflections Custom Cycles LLC in Ypsilanti, Michigan, for nearly 17 years.

That's how he came up with the idea.

About a year after Stacy passed, in 2012, Jendon and his coworkers finally "put it into the works."

The motorcycle cost around $60,000 in parts and a couple hundred man hours went into building it, Jendon said.

The Harley Davidson Street Glide is covered in bright pink breast cancer awareness ribbons, has chrome accessories throughout, LED lights and a 600-watt stereo system. The back of the bike has an "In loving memory" photo of Stacy painted on it.

Even before Stacy was diagnosed, the Jendon family participated in a lot of breast cancer walks. Stacy had friends who had breast cancer and liked to raise awareness.

The "breast cancer pink" bike is another way to continue to promote awareness, Jendon said. "But I didn't realize how big it would get."

Jendon owns seven motorcycles, he has trucks, but this bike is by far his favorite -- for obvious reasons.

"I'm always doing stuff on it," he said.

Every so often, he holds a bike event or promotes a "ride" on social media. The company tells people to show up at the shop on a Saturday afternoon to go riding.

Usually around 40 to 60 motorcyclists show up, Jendon said.

The motorcycle enthusiast has built hundreds of custom bikes in his lifetime, but this one gets more attention than any one he's ever built.

"It's amazing," he said. "If it's not a lady coming up to me who is a survivor, struggling with tears in her eyes -- it's loved ones; it's honestly nonstop."

Maybe one day, one of his sons will get to take it for a spin.

"One of [my boys] is getting his cycle endorsement next weekend," he said. "He loves it."