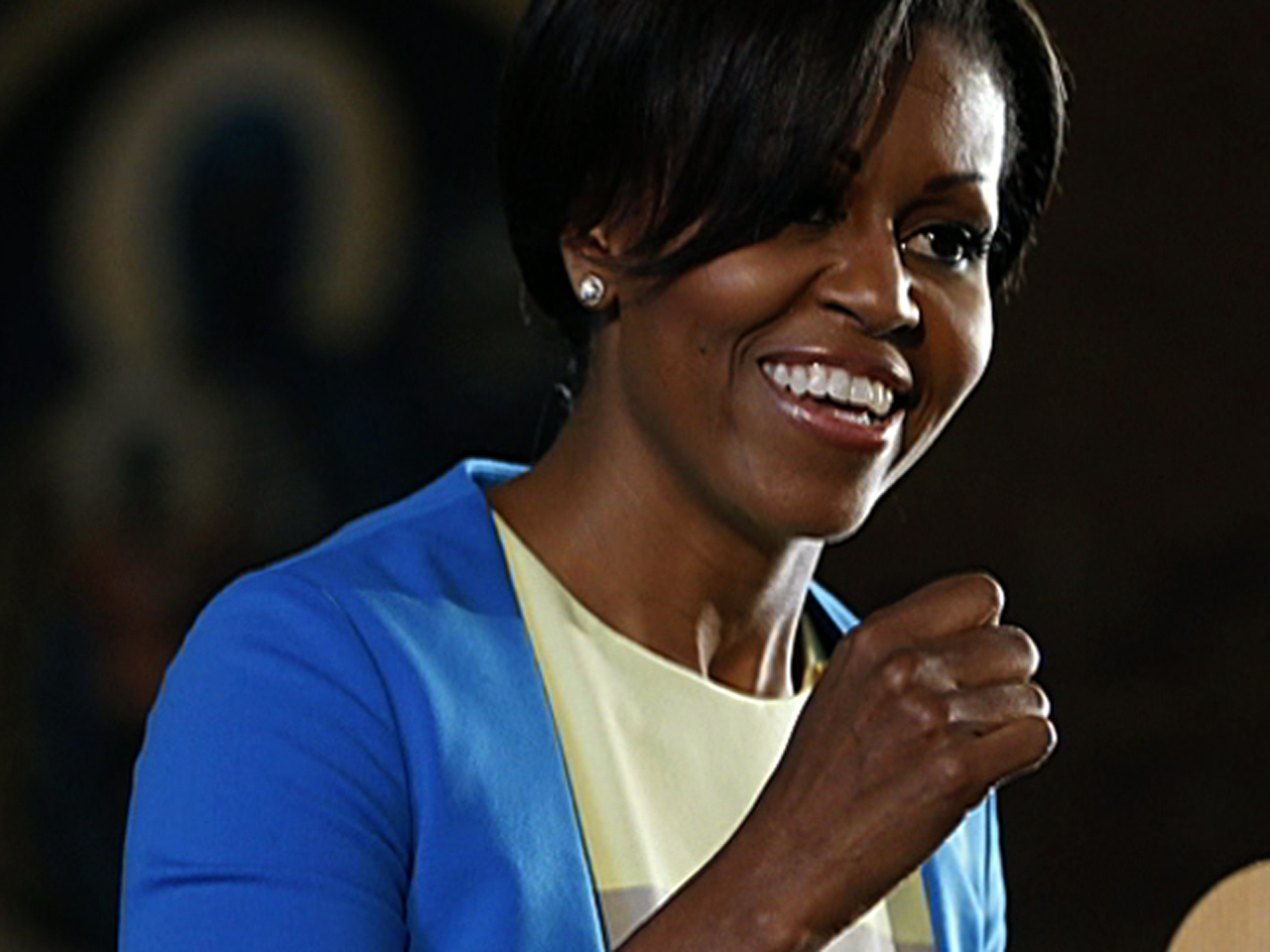 The 2012 presidential campaign is well under way for Michelle Obama, and the first lady is promising to put herself into the election effort like never before. More than a year out from Election Day, she is hauling in millions in campaign cash and sketching a portrait of her husband that is drawn with an intimacy that no one else could duplicate.

The first lady always ends her speeches to Democratic donors with two questions: "Are you in? Are you fired up?"

It's a call to arms that the Obama campaign needs more than ever this election, when the combination of a weak economy and dampened enthusiasm for the president are creating a tougher climate for raising money.

Since mid-May, the first lady has headlined more than a dozen fundraisers for her husband and the Democratic Party, at sites from Burlington, Vt., to Berkeley, Calif. She's cramming in three more events in Maine and Rhode Island within six hours on Friday, the last day of a closely watched reporting period for quarterly campaign fundraising. She's also blasted out a number of mass emails to party faithful trying to recapture the energy that has waned since her husband's 2008 campaign.

"He needs you to work like you've never worked before," Mrs. Obama tells audience after audience. "Every day. And that's what I plan on doing."

On Thursday, the Obama campaign popped out an email from Mrs. Obama urging people to donate even as little as $3 before Friday's quarterly deadline to be in the running for dinner with her husband.

White House officials say the first lady's political pace will pick up in coming months: She's promised a "rigorous" schedule - without taking too much time away from the Obamas' 10- and 13-year-old daughters. Inevitably, family obligations mean she's not out there as much as some Democratic partisans would like for one of the party's prime assets.

At the podium the first lady is both poised and cautious. She often speaks from a teleprompter and relies heavily on her stump speech, addressing largely sympathetic audiences at closed fundraisers. "My motto is: Do no harm," she joked to reporters when asked about her political role.

Mrs. Obama surely has not forgotten the flak she caught during the 2008 campaign for her remark that for the first time in her adult life she was proud of the United States. She later issued a clarification saying she had always been proud of her country.

While Mrs. Obama campaigned for her husband's election in 2008 (and participated in 30 midterm political events) there are different dynamics this time:

-Barack Obama's day job is a lot more demanding now, forcing him to rely more on others to press the case for his re-election. During the debt crisis last summer, the president had to cancel 10 fundraisers around the country. Mrs. Obama's schedule was unaffected.

-The first lady's popularity has remained high even as the president's has slipped. Polls show she has broader appeal than her husband with a number of groups that could be troublesome for Obama next year, including senior citizens, whites and people in the West and Midwest. While she is popular with both sexes, women express more deeply favorable views of Mrs. Obama: 47 percent say they have "very favorable" opinions of her, compared to 31 percent of men. A number of her fundraisers have been before largely female audiences.

-The first lady can easily travel to smaller cities and out-of-the-way places that are more difficult for Air Force One and a cumbersome presidential entourage to reach. On July 26, she hit a $1,000-and-up breakfast in Park City, Utah, and a $1,000-and-up luncheon in Aspen, Colo., where she kicked off her shoes and mingled in a tent on the lawn. On June 30, she fit in two fundraisers in Burlington, Vt., and one in Boston. On Friday, she'll be in Portland, Maine, and Providence, R.I.

-Mrs. Obama is more at ease as a campaign surrogate now, after years in the spotlight. At the start of each appearance she gives a shout-out to prominent locals, singling out "amazing" politicians and "favorite" people. Trying to humanize her husband, she tells audience after audience about the quiet moments, after their daughters are asleep, when Obama hunches over letters from struggling Americans. "I see the sadness and the worry creasing his face," she tells her listeners.

Campaign manager Jim Messina says Mrs. Obama is a unique ambassador for her husband because of her front-row seat during his first term and her knowledge of his character. "She was an enormous asset to the president traveling the country in 2008, and we expect that she'll play just as critical a role in 2012," he said.

Mary Powell, a Vermont utility executive, said her 15-year-old daughter used some of the money she inherited after her grandfather's recent death to attend the first lady's luncheon in Burlington last summer, and both mother and daughter came away from the event moved.

"I found myself tearing up a couple of times," Powell said. "She feels like the real deal."

Feminist leader Gloria Steinem, who appeared alongside Mrs. Obama at a New York fundraiser last week, describes the scene there as "a room full of New York women who are activists, who care deeply about the issues, many of whom are feeling that the president could have been stronger as a negotiator, that he's handcuffed by the right wing."

"You can imagine the feeling in a New York room," Steinem said. "Well, by the end of her speech, people were standing up cheering and ready to go to work. It was a transformation."

The first lady is constantly under a microscope. She was criticized earlier this month for wearing diamond bracelets costing tens of thousands of dollars to one of the New York fundraisers. (She had borrowed the jewels from a store for the night.)

In general, though, first ladies are afforded more respect and leeway in campaigning, and they speak in more controlled environments than do the wives of presidential hopefuls, who are thrown into an exhausting, rough-and-tumble political scene and can more easily fall victim to gaffes.

In 2004, Laura Bush raised more than $15 million for George W. Bush and the GOP and kept a busy separate political schedule.

White House aides say it's too early to set a goal for Mrs. Obama, but she'll go wherever the campaign directs.