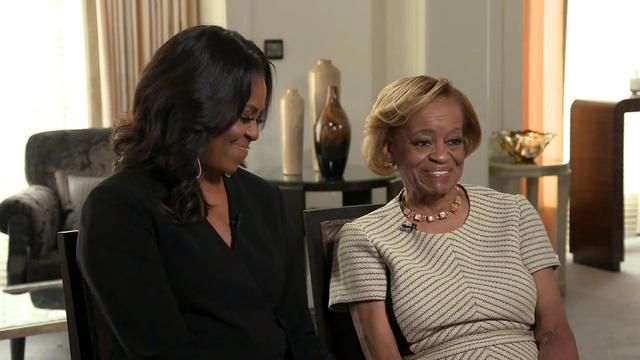 If you ask Michelle Obama's mother who she wants to be when she grows up, she'll tell you "Michelle Obama." Marian Shields Robinson is the woman who made the first family work, from teaching her grandkids how to do laundry to riding in their motorcade with them to school.

Despite all those years under the intense scrutiny that comes along with being part of the president's family, Robinson was rarely in the public eye. In their first national TV interview together, Robinson and Obama tell "CBS This Morning" co-host Gayle King about their eight years in the White House together and the challenges of raising kids at America's most famous address.

It was that worry for Sasha and Malia that got her to move to D.C., where her daughter admits she needed her, too.

"I wanted them to come home to family….there was just parts of the girls' lives that I just knew were going to be okay 'cause Mom was there. When I traveled internationally, grandma was there. When I wasn't home at the end of the day, grandma was there. When the kids were still little and they needed to have someone be with them in school. I mean, you think about my girls were being driven around in a motorcade of three cars with at least four grown adults with guns in each of those cars. And I just thought that that's an unnatural way for a little 2nd grader to go to school. Well, Mom would ride in the car with her to make it feel like a regular carpool," Obama said.

Life at 1600 Pennsylvania Avenue was a "huge adjustment" for Robinson who insisted on doing her own laundry. She also taught her granddaughters how to do it, giving them "laundry lessons" as her daughter described it. Even with her low public profile, Obama said her mother became the most "beloved figure" in the White House.

"She had a stream of people. The butlers, the housekeepers. They would all stop by...Grandma's room was like the confessional. You know, everyone would go there and just unload, you know? And then they'd leave. People still visit with Mom in Chicago," she said.

Still, Robinson is glad to have her life back. In fact, she doesn't miss the White House at all – just the people. "Because they were like family to me," she said.

"The eight years was more than enough. And what I realized over the years is that home is where we are, you know? And the White House happened to be our home for eight years. But we took all that love and energy, and we just moved it to another house," Obama said.