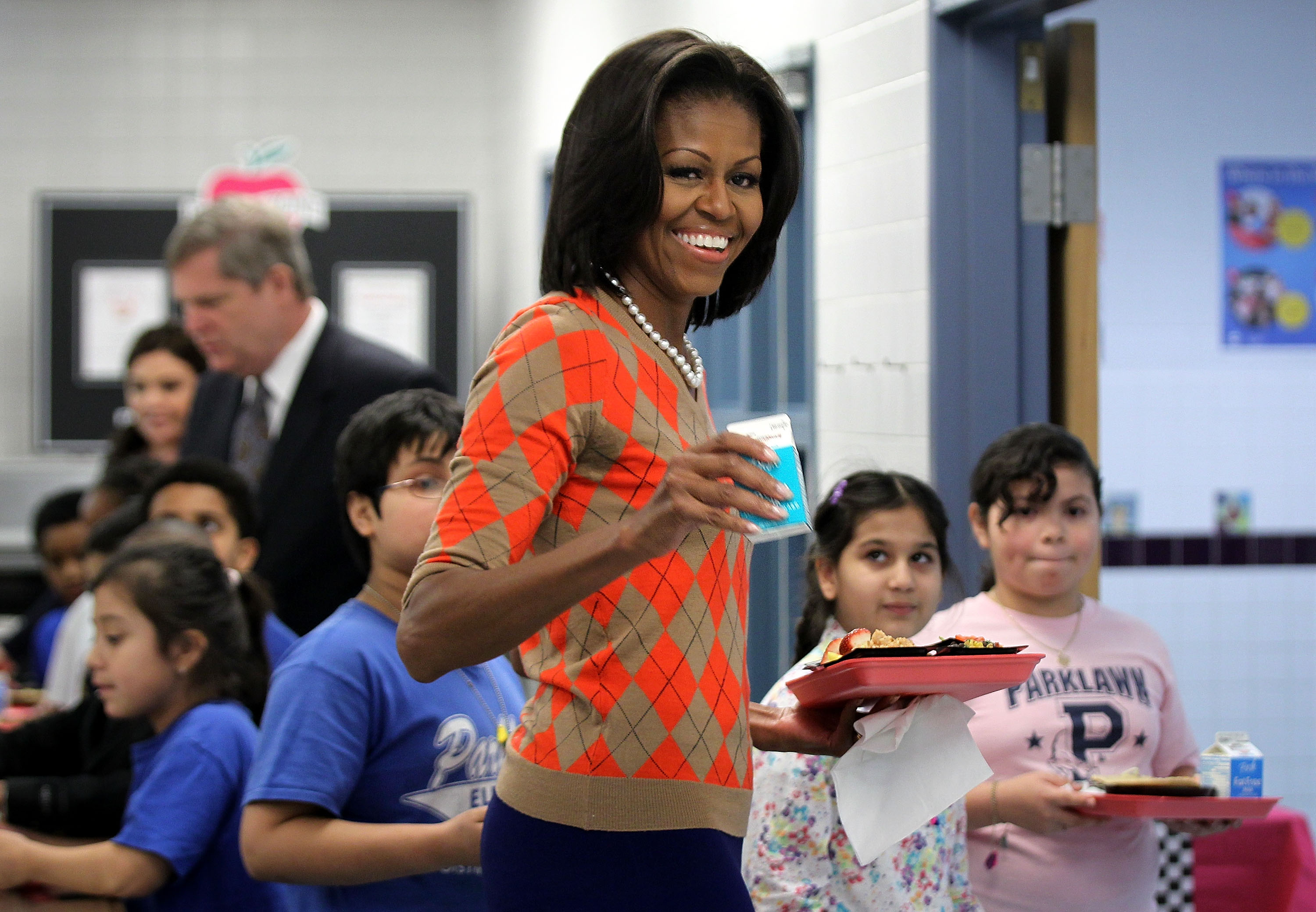 WASHINGTON -- First ladies typically avoid getting into public scraps, but Michelle Obama has jumped into perhaps her biggest battle yet.

She's fighting a House Republican effort to soften a central part of her prized anti-childhood obesity campaign and she says she's ready "to fight until the bitter end."

Mrs. Obama even mocked the GOP effort in an opinion column and argued her case before her Twitter followers.

"Remember a few years ago when Congress declared that the sauce on a slice of pizza should count as a vegetable in school lunches?" she wrote in The New York Times. "You don't have to be a nutritionist to know that this doesn't make much sense. Yet we're seeing the same thing happening again with these new efforts to lower nutrition standards in our schools."

Mrs. Obama lobbied largely behind the scenes four years ago for the Healthy Hunger-Free Kids Act of 2010, which requires more fruit, vegetables and whole grains in school meals, along with less sodium, sugar and fat. The new standards would be phased in over time. It was a major achievement, the first update to school lunch rules in decades designed to make school meals more nutritious.

"My husband worked very hard to make sure that this bill was a priority in this session," she said at the time of the bill's passage.

But the School Nutrition Association, an industry-backed group that represents school cafeteria workers and originally supported the standards, has now turned against the new standards. The association says it fully supports getting kids to eat healthier but says many districts are losing money because students aren't buying the healthier lunches.

"There's been so much change so fast, and we'd just like to catch our breath and get these changes done," Leah Schmidt, the president of the association, told "CBS This Morning." "And some districts haven't even gotten that far yet."

More than 1 million fewer students eat lunch at school each day since the first round of standards went into effect in 2012, following decades of steadily increasing participation, said Diane Pratt-Heavner, a spokeswoman for the association. A second round of rules, including standards for school breakfasts, took effect July 1.

"How can we call these standards a success when they are driving students away from the program?" she said.

Her group wants more flexibility for districts that are losing money. A House bill to fund the Agriculture Department next year would give districts a chance to apply to skip the requirements for one year.

Republicans say the new standards are too expensive, and that kids are throwing away more food. Rep. Robert Aderholt of Alabama, the Republican author of that measure, said the lunch rules go too far and came too fast for school districts to handle.

"As well-intended as the people in Washington believe themselves to be, the reality is that from a practical standpoint these regulations are just plain not working out in some individual school districts," he said after a House panel approved the bill. A vote by the full House is expected after its July Fourth break.

"This is unacceptable," Mrs. Obama said of the House bill that would delay the standards. "It's unacceptable to me not just as first lady but as a mother."

Critics of the association say the about-face is motivated not only by overburdened school officials but also by the food industry. Food companies are some of the association's highest-paying members and supply schools with most of their food. The industry largely has kept silent through the debate but will spend millions of dollars to reformulate many products to meet the new standards.

"The last thing that we can afford to do right now is play politics with our kids' health, especially when we're finally starting to see some progress on this issue," Mrs. Obama said at the White House, where she met with a group of school nutrition experts, all of whom were friendly toward the standards. "Parents have a right to expect that kids will get decent food in our schools, and we all have a right to expect that our hard earned taxpayer dollars won't be spent on junk food for our kids."

The association requested a meeting with Mrs. Obama and Vilsack. Instead it was invited to sit down next week with Vilsack and Sam Kass, a White House chef who is executive director of the first lady's anti-obesity initiative, along with representatives from a dozen other organizations that favor the standards.

The first lady's publicly aggressive approach against Congress and the school nutrition association stands in stark contrast to the quiet lobbying she did early on, and to her handling of earlier controversies. Her approach has been to bite her tongue and not comment in the heat of the moment.

"She very, very strongly believes in the anti-obesity initiative, and I think she sees the attempt by Congress to roll back the 2010 legislation as just being anathema after trying very hard to change the culture of what we see going into these institutional lunches," said Myra Gutin, who studies first ladies at Rider University.

Mrs. Obama says the requirements are based on sound science and that 90 percent of schools are meeting them. The association says districts are unprepared to meet the newest standards.

"I'm going to fight until the bitter end to make sure that every kid in this country continues to have the best nutrition that they can have in our schools," the first lady said at a White House event where she showcased elementary school students preparing and then eating a salad lunch using vegetables they had planted in her garden on the South Lawn.

The USDA has already tweaked some of the rules, giving some schools, for example, two extra years to incorporate whole grains into their meals.

The White House has threatened to veto the House bill. The Senate version does not include the one-year waiver.