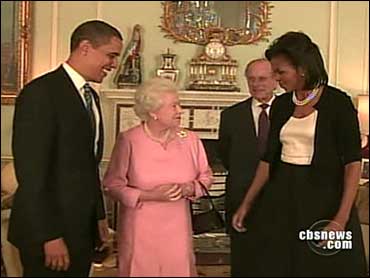 Despite intense secrecy, word still got out that Michelle Obama would be touring a cancer center Wednesday, drawing an instant crowd. It's been a long time since an American first lady was greeted so enthusiastically in London.

"She just looks like a very charming, sophisticated woman and she will represent America well," said one British woman.

While the first lady was asked if she would have tea, it turn out the burning question on the minds of British women was why Michelle Obama ever carries a handbag, according to CBS News correspondent Sheila MacVicar.

After all, Britain's Queen would never be caught without one. She even matches her handbags to her tiaras. Then there's Britain's formidable former Prime Minister Margaret Thatcher, who was known to "handbag" political opponents, taking a proverbial swing at all challengers. And of course there was the always elegant icon, Princess Diana.

The British are never dressed unless they're toting a bag. How, they ask, can she get on and off a plane without one?

At her husband's side Wednesday evening as they met Queen Elizabeth, both women were true to style. One with bag, one without.

A "cultural" divide that, like so much about this woman, fascinates the British public.