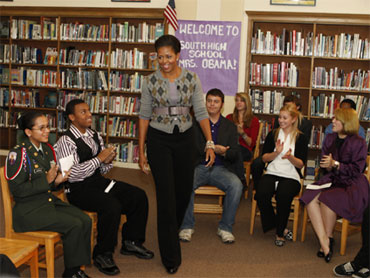 "When I was growing up, I was never a great standardized test-taker," but she ended up attending Princeton University, Mrs. Obama said. Straight-A grades and a strong essay helped her overcome bad test scores, she added.

The first lady, however, did not hint that she thought standardized tests should go away.

Speaking to a student who had asked whether it's fair to use test scores to measure schools when some students don't speak English well, Mrs. Obama said the tests are "part of the system" and can't be avoided.

"You can fight the tests, or you can work with them and turn them into an advantage," she said.

When asked about the hardest thing to being the first lady, Mrs. Obama gestured toward a bank of news cameras and said it was "making sure my girls don't get lost in all this."

"I want to make sure they come out of this as whole as possible," she said.

She also added that she and President Barack Obama work to make time for daughters Malia, 11, and Sasha, 8.

"When they have an event, it takes precedence over everything," said Mrs. Obama.

Earlier in the day, Mrs. Obama spoke about the importance of mentoring at a lunch with about 80 girls at the Colorado governor's mansion. Attendees at the luncheon included Kathleen Sebelius, the former governor of Kansas and President Obama's Health & Human Services secretary. Other mentors were Latina astronaut Ellen Ochoa, and actresses Susan Sarandon and Alfre Woodard.

Mrs. Obama did not take questions from the media, and reporters were allowed to sit in on only parts of the luncheon and afternoon mentoring session.

The mentoring initiative was launched in Washington, D.C., earlier this year. Aides to the first lady said she would visit other cities, but didn't have details.