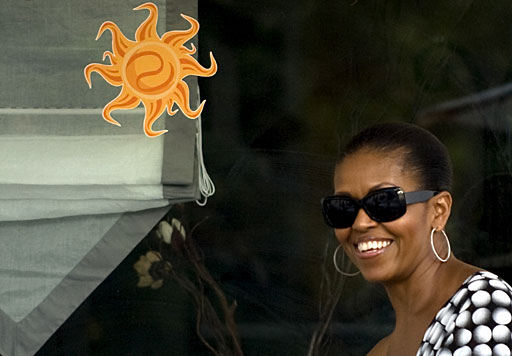 Andrea Tantaros has penned a scorching editorial for the New York Daily News deeming First Lady Michelle Obama a "modern-day Marie Antoinette" for her vacation in Spain with her daughter.

"The First Lady is spending the next few days in a five-star hotel on the chic Costa del Sol in southern Spain with 40 of her 'closest friends,'" Tantaros writes, pointing to a CNN report that Michelle Obama and her group are expected to occupy 60 to 70 rooms. "Not exactly what one would call cutting back in troubled times."

Tantaros goes on to criticize the first lady for traveling abroad instead of within the United States, something that would help the U.S. economy.

"Michelle Obama seems more like a modern-day Marie Antoinette - the French queen who spent extravagantly on clothes and jewels without a thought for her subjects' plight - than an average mother of two," she writes. "... I don't begrudge anyone rest and relaxation when they work hard. We all need downtime - the First Family included. It's the extravagance of Michelle Obama's trip and glitzy destination contrasted with President Obama's demonization of the rich that smacks of hypocrisy and perpetuates a disconnect between the country and its leaders."

According to the White House, Mrs. Obama is traveling with minimal staff and a small group of family friends for a mother daughter trip long in the works.

The FIrst Lady's press office referred to White House Press Secretary Robert Gibbs' statement at the White House briefing yesterday that "the First Lady is on a private trip."

"She is a private citizen and is the mother of a daughter on a private trip," he said. "And I think I'd leave it at that."

CBS News White House correspondent Mark Knoller reports the C-32A (757) the First Lady used to fly to Spain - one of the planes that usually serves as Air Force Two, and sometimes Air Force One - operates at a Department of Defense reimbursement rate of $11,351 per hour.

The White House says that as a policy, official trips by the first family are paid by the government but all personal elements paid are personally. Since this is a private trip, the White House seems to be suggesting that the Obamas are personally paying all costs associated with the vacation.

But there appears to be some wiggle room there, in part because the Secret Service must protect the First Family, and the cost to taxpayers would presumably go up during travel.

A few years ago, as Knoller notes, the Government Accountability Office did an analysis of presidential travel at the behest of Congress. The Secret Service refused to divulge how many personnel and costs are associated with safeguarding a protectee during a trip, citing its policy to not give up information that might be used to gauge a level of protection.