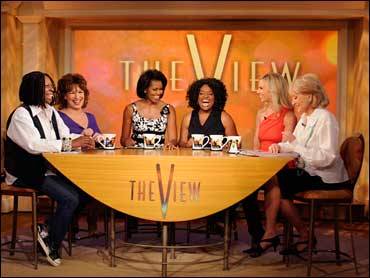 Michelle Obama said Wednesday she was "touched" that first lady Laura Bush came to her defense after she was harshly criticized by Republicans for her February comment that for the first time in her adult life she was proud of the United States.

Obama, wife of Democratic presidential candidate Barack Obama, later clarified her remarks, saying she had always been proud of her country and was particularly proud to see so many people involved in the political process.

In an interview last week with ABC, Bush said, "I think she probably meant 'I'm more proud,' you know, is what she really meant." She said comments in a campaign are closely watched and can be misconstrued.

Michelle Obama told the women of ABC's "The View" that she sent Bush a note for her remarks.

"It took me a while to write it. It's like, how do I address her?" she said. "I said dear madam first lady."

Obama did not elaborate on the contents of the letter because she said Bush might not have received it yet.

"But I was touched by it," Michelle Obama said. "And that's what I like about Laura Bush. You know, just calm, rational approach to these issues. And you know, I'm taking some cues. I mean, there's a balance. There's a reason why people like her. It's because she doesn't, sort of, you know, fuel the fire."

At a campaign stop in February, Michelle Obama told an audience in Milwaukee: "For the first time in my adult life, I am really proud of my country. Not just because Barack is doing well, but I think people are hungry for change."

Cindy McCain, wife of Republican presidential contender John McCain, later sought to capitalize on the remark, saying "I have, and always will be, proud of my country."

She walked onto the set arms linked with Barbara Walters, one of the show's co-hosts. She joked with the other cast members Whoopi Goldberg, Joy Behar, Elisabeth Hasselbeck and Sherri Shepherd, giving them fist bumps as she joined them at the table.

"Wait," she told them after sitting down. "I have to be greeted properly. Fist bump, please."

Earlier this month, a Fox News analyst suggested that her affectionate on-stage knuckle bump with her husband, on the night he locked up the Democratic presidential nomination, might have been a "terrorist's fist jab."

"It is now my signature bump," Michelle Obama told "The View" co-hosts. "But let me tell you, I'm not that hip. I got this from the young staff. That's the new high-five."

Michelle Obama, 44, and her husband, 46, also appear on the cover of "Us Weekly" magazine this week, under the headline, "Michelle Obama: Why Barack Loves Her."

Barack Obama told the celebrity magazine, "When we started out on this campaign, we wanted to make sure that life for our girls would remain as normal as possible, and it's because of Michelle that they are so grounded. Nothing is more important to Michelle than being a good mother, and she works every day to instill in our girls the same values we were raised with."

The couple have two daughters, Malia, 9, and Sasha, 7. The issue hits newsstands on Friday.