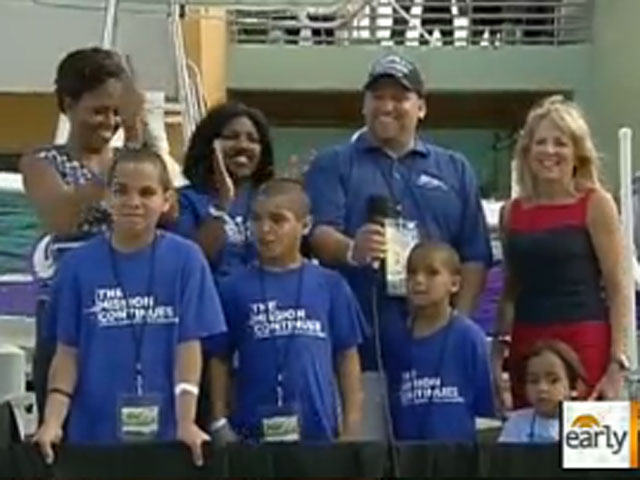 First Lady Michelle Obama and Dr. Jill Biden, Vice President Joe Biden's wife, were booed by some NASCAR fans as they served as the grand marshals for the racing circuit's final event Sunday.

Obama and Biden were at the Homestead-Miami Speedway to promote Joining Forces, an organization that promotes the hiring and training of veterans. They were joined by Army Sgt. Andrew Barry, a veteran of the Afghan and Iraqi wars who now volunteers at an Orlando, Fla., veterans center, and his family. The clip shows that people cheer for the soldier, but boo when the two women's names are announced. There are some audible sounds of approval, but they seem to be mostly drowned out by the dissenters.

There's been some dispute as to how drastic the booing was. ABC News reports that a source who was with Obama said that no one at the event could hear the booing over the "loud chaotic program with jets flying over and tons of noise."

In a statement to CBSNews.com, White House Communications Director Kristina Shake did not address the booing, but instead focused on how Obama was honored to be at the event. "Mrs. Obama was proud to join NASCAR in recognizing our nation's veterans and military families to raise awareness of this important issue for all Americans," Shake said.

"As she has always said, she will proudly stand with anyone making a major commitment to serve and honor our military community and yesterday, NASCAR did just that. They paid special tribute to our veterans and military families at the championship race by donating over 5,000 tickets to military families and by honoring Sergeant Berry and his family, true American heroes. Mrs. Obama and Dr. Biden enjoyed their visit to the speedway and are looking forward to working across the country to honor America's veterans and military families," she explained.

And according to the Associated Press, the women received a standing ovation at the pre-race driver's meeting. Obama also spoke at a NASCAR-Joining Forces barbecue for military families. She talked to the the military children at the event, thanking them for their sacrifice of being strong while their parents are away.