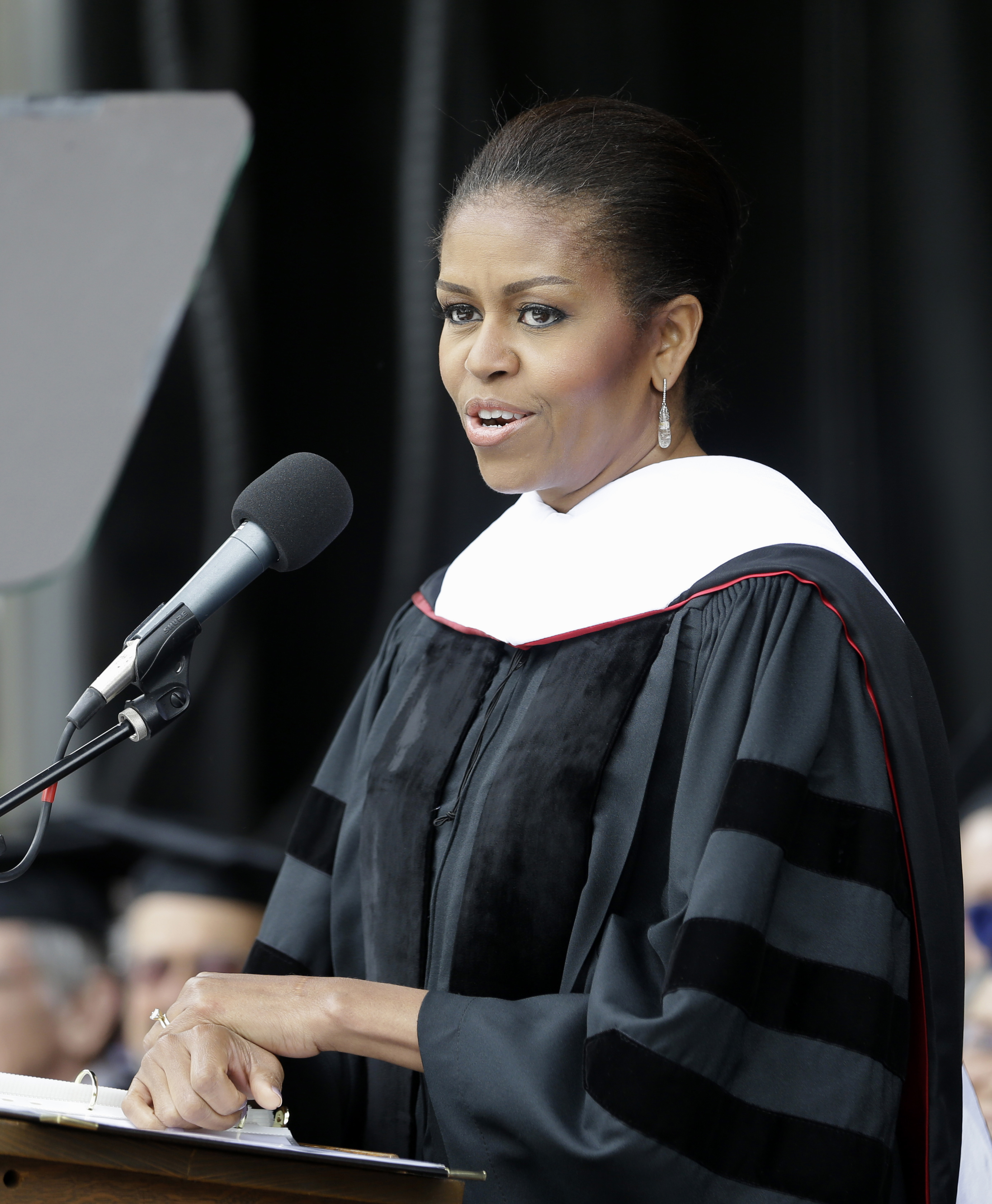 First lady Michelle Obama advised the 2015 graduates at Oberlin that they'll find a world of clamor and conflict that will beset them outside the protected lives they've led in college. And, she told them, they should embrace it.

She quoted Martin Luther King, Jr., who spoke at the college 50 years ago and told the class of 1965, "Today you bid farewell to the safe security of academic achievement."

Outside that atmosphere of safety, what Obama referred to as four years of "thoughtful, respectful discussion, debate and late-night conversations," she posited that graduates might find themselves "a little dismayed by the clamor outside these walls: the name calling, the negative ads, the folks yelling at each other on TV."

The first lady speculated that many might wish to retreat from conflict, working with their friends on things they care about, which was a sentiment she said she understood.

"In fact, I sometimes have that instinct myself. Run!" she said.

It is also, she said, an impulse they should avoid.

"Today I want to suggest that if you truly wish to carry on the Oberlin legacy of service and social justice, then you need to run to and not away from the noise," she said. "Today, I want to urge you to actively seek out the most contentious, polarized, gridlocked places you can find because so often throughout our history, those have been the places where progress really happens."

She invoked the struggles for women's suffrage undertaken by their fellow alumus, Lucy Stone. And she talked about President Franklin Roosevelt's push for the New Deal, and of King's fight for civil rights. And, seeking to put today's political climate in context, Obama reminded them, "If you think today's gridlock is bad, let me remind you it was a good century between the signing of the Emancipation Proclamation and the passage of the civil rights legislation of the 1960s."

All of these figures, Obama told them, had this in common: "They didn't just give up and retreat to the comfortable company of like-minded folks. Because they understood that this is how democracy operates. It is loud and messy. And it's not particularly warm and fuzzy."

But the clamor she told them, comes "from a handful of very loud folks out on the fringes," while most of the people in the country she called "open-minded and big-hearted," people, she said, who "are smart enough to see through the noise."

Obama prodded the students, too, saying, that with their Oberlin degrees and "all the status and connections that degree confers," they "don't get to be precious or cautious or cynical," and she identified the areas for the graduates to tackle: "Climate change, economic inequality, human rights, criminal justice - these are the revolutions of your time. And you have as much responsibility and just as much power to wake up and play your part in our great American story. Because it is absolutely still possible to make a difference. The great moments in our history are not decades in our past. They're happening right now - today - in our lifetimes."