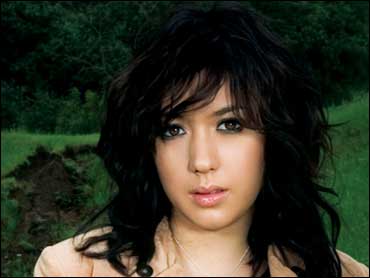 Michelle Branch has a lot to look forward to this month. The Wreckers, her duo with singer Jessica Harp, will release their new album "Stand Still, Look Pretty" on May 23. The Wreckers will also be kicking off a tour as the opening act for Rascal Flatts on May 26.

Branch also has some personal milestones coming up. She will celebrate her second wedding anniversary on May 23 — the same day her record comes out. This year will also mark her very first Mother's Day as a mom.

Most musicians who go on the road have to leave their family behind. But for the 24-year-old singer/songwriter, being a musician is a family affair. Branch's husband, Teddy Landau, plays bass in The Wreckers' band — and they bring their 9-month old baby girl Owen Isabelle with them when they travel.

Branch said that touring with female country trio Dixie Chicks in 2003 was a lesson in balancing family life and performing. "It was something that I really admired about them," she said. "[I] was watching them with their whole families out on the road and balancing motherhood and the career and they kind of had it all. They really were able to keep a lot of normalcy for their children."

To make little Owen feel comfortable, Branch and Landau changed a bunk into a crib on their tour bus. Branch said the baby sleeps better on the bus than anywhere else and deals well with meeting new people and visiting new places.

Motherhood has definitely changed Branch. "I don't take things too seriously anymore," she said. "I used to really, really sweat the small stuff. I used to let things get under my skin and bother me for days on end. And now, I've just totally mellowed out."

Even though it's her first Mother's Day, Branch isn't planning anything special.

"I get to spend my first Mother's Day auditioning band members in Nashville, and then I'm probably just going to grab dinner with my husband and watch 'Grey's Anatomy,' she laughed.

When she was pregnant, Branch and her husband joked that their baby would rebel against her musician parents and become a doctor, accountant or lawyer. But it looks like Owen is already showing an interest in the family business.

"Anytime either of us picks up a guitar, she stops whatever she's doing and she stares and she looks from the neck of the guitar to you strumming," said Branch. "She sings along to songs if Jessica and I are singing. … I think she definitely has an appreciation of music."

Branch jokes that she and her husband are concerned Owen may develop an appreciation of musicians, not just music.

"Teddy and I, when she watches us play guitar, I'm like, 'great, you know what's going to happen, she's going to fall for a guitar player and we all know how guitar players are.' So we're crossing our fingers!"