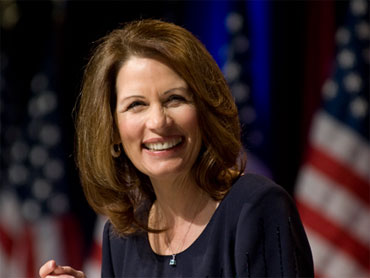 Rep. Michele Bachmann of Minnesota, a Republican and founder of the Tea Party Caucus in the House, today cast last year's health care reform law - "Obamacare" to its critics - as "the crown jewel of socialism."

The controversial Bachmann, who is said to be considering a 2012 presidential run, made the comments during debate on a bill to repeal the health care legislation. The repeal bill is expected to easily pass the GOP-led House but stall in the Democrat-controlled Senate.

Bachmann and her colleagues insist, however, that the vote is not just symbolic, and she vowed yesterday that "we aren't going to just check the box off and say we had one vote and we're going to move on to other topics." Pointing to what she called the "arrogance" of Democrats, she said Republicans would work in the short term to defund the bill so that it cannot effectively be implemented.

In her remarks on the floor Wednesday afternoon, Bachmann said the health care law - which does not include a government option - amounted to "socialized medicine."

"The American people spoke soundly and clearly at the ballot box in November and they said to us, Mr. Speaker, in no uncertain terms, repeal this bill," she continued. "So today, this body will cast a vote to repeal Obamacare and to those across the United States who think this may be a symbolic act, we have a message for them. This is not symbolic, this is why we were sent here and we will not stop until we repeal a president and put a president in the position of the White House who will repeal this bill, until we repeal the current Senate, put in a Senate that will listen to the American people and repeal this bill."

Added Bachmann: "Because what has been the result, Mr. Speaker? It's been this. It's been job loss, it's been increases on cost to the American people, I've seen everything from 26 percent increases on health insurance, to 45 percent increases on health insurance. This will break the bank. And we won't let that happen to our country. So make no mistake, Mr. Speaker, we are here to stay and our resolve is firm. We will continue this fight until Obamacare is no longer the law of the land and until we can actually pass reform that will cut the cost of health care."

The Congressional Budget Office estimates that the repeal bill would actually increase the budget deficit by $230 billion over a decade, though Republicans maintain that the estimate does not take into account all of the costs of the measure.