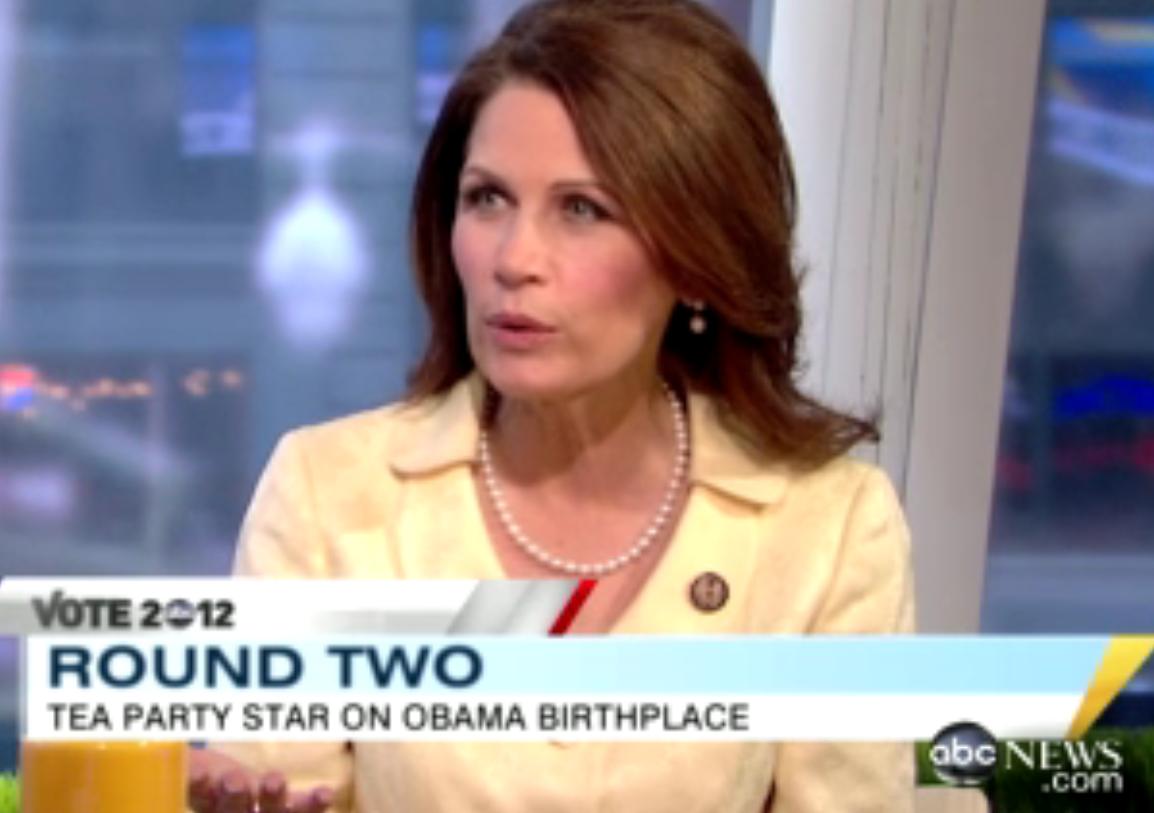 Potential presidential candidate Michele Bachmann (R-Minn.) joined the ranks of Republicans distancing themselves from the "birther" movement on Wednesday, stating that she is ready to "move on."

In an appearance on ABC's 'Good Morning America," Bachmann, who recently called for the president to "just answer some questions and show his [long-form birth] document," was shown the physical copy of a document certifying Mr. Obama's birth.

"I have the president's certificate right here. It's certified, it's got a certification number. It's got the registrar of the state signed. It's got a seal on it. And it says 'this copy serves as prima facie evidence of the fact of birth in any court proceeding,'" said GMA host George Stephanopoulos, showing her a piece of paper.

"Well, then that should settle it," Bachmann responded, adding later that "as long as someone introduces it I guess it's over."

"I take the president at his word and I think - again I would have no problem and apparently the president wouldn't either," she said. "Introduce that, we're done. Move on."

Some top Republicans have expressed concern over the recent rising prominence of the "birther" issue in Republican discourse - Donald Trump, who is flirting with a presidential bid, has essentially made it the cornerstone of his possible candidacy. Challenges to Mr. Obama's citizenship has been widely debunked, and some GOP leaders fear continued discussion of the matter could reflect poorly on the party.

On Monday, Arizona Gov. Jan Brewer became the highest-ranking Republican to officially weigh in on the matter, vetoing a bill that would require presidential candidates show their birth certificate or similar document.

"This is a bridge too far," Brewer said of the legislation.

In a recent interview with Fox News, Republican strategist Karl Rove suggested that Trump's emphasis on the issue was making Republicans look bad.

"He was an interested candidate who had a business background and could have contributed to dialogue," Rove told Fox's Greta Van Susteren. "He's off there in the nutty right, and is not an inconsequential candidate."

Rove refused to say explicitly that the business magnate was hurting the party with his comments, but noted that his focus on Obama's citizenship had turned him into a "joke candidate."

A handful of other potential presidential candidates, including Mitt Romney and Tim Pawlenty, have also distanced themselves from the issue.

"I think the citizenship test has been passed. I believe the president was born in the United States. There are real reasons to get this guy out of office," Romney said the day after formally announcing the formation of a presidential exploratory committee.

Pawlenty has actually turned the matter into something of a stump speech one-liner: "Now, I'm not one to question the authenticity of Barack Obama's birth certificate," Paw­lenty told Tea Party supporters at an Iowa rally in March. "But when you look at his policies, I do question what planet he's from."

In an interview with ABC last week, Mr. Obama suggested that exploiting the issue "creates, I think, a problem for [Republicans]."

"I think that over the last two and a half years there's been an effort to go at me in a way that is politically expedient in the short-term for Republicans," he said. "But [it] creates, I think a problem for them when they want to actually run in a general election where most people feel pretty confident the President was born where he says he was, in Hawaii. He-- he doesn't have horns...we're not really worrying about conspiracy theories or-- or birth certificates," said.

Nevertheless, some Republicans have stood behind Trump on the issue.

In a Tuesday night appearance on Fox News, Sarah Palin blasted the press for treating the billionaire "unfairly" in regard to his recent claims.

"Donald Trump is the one being really treated unfairly," said the former Alaska governor. "He's merely answering reporters' questions about his view on the birth certificate...Reporters turn that around and say 'That's all he's got. He's always only running on a birth certificate issue' when that's not the case."

Still, even Palin has declined to firmly enter the birtherist fray: In another recent Fox News appearance, Palin noted that while she appreciated Trump's efforts to "getting to the bottom of" the citizenship question, "I think that [the president] was born in Hawaii."