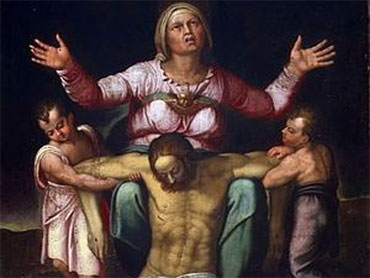 Check behind your couch, folks. You might have more than loose change back there.

At least, that may be the case for one family in Buffalo, N.Y. who may have had a painting worth $300 million tucked behind their living room sofa - for 27 years, reports the New York Post.

According to the newspaper, an expert has analyzed the painting and believes it to be a lost Michelangelo -- an unfinished painting of Jesus and Mary -- potentially one of the biggest finds of the century.

The painting, which the Post says the family nicknamed "The Mike," found its way behind the couch after it was knocked off its post by a tennis ball. After the incident, the Kober family wrapped it up and stowed it away.

But 27 years later, in 2003, Air Force Lt. Col. Martin Kober, now 53, decided to take advantage of his free time and research family stories that the painting was done by the famed Italian painter.

Kober found Antonio Forcellino, an Italian art restorer and historian, who told him the painting was indeed real.

According to the Post, scientific analysis has proven the claim isn't crazy.

Forcellino told The Post that infrared and X-ray examinations of the painting -- on a 25-by-19-inch wood panel -- show many alterations made by the artist as he changed his mind, and an unfinished portion near the Madonna's right knee.

"The evidence of unfinished portions demonstrate that this painting never, never, never could be a copy of another painting," Forcellino told the paper. "No patron pays in the Renaissance for an unfinished copy."

But how did the family get the painting?

Its history points to the work being done by Michelangelo around 1545 for his friend, Vittoria Colonna. The Pieta painting was passed to two Catholic cardinals, eventually ending up in the hands of a German baroness named Villani, according to the Post.

Kober told the newspaper the work ended up in the family after Villani willed it to her lady-in-waiting Gertrude Young. Young was the sister-in-law of Kober's great-grandfather and she sent the work to America in 1883.

Forcellino told the Post, "I'm absolutely convinced that is a Michelangelo painting."

Now in a bank vault, the painting, according to experts, is estimated to be worth hundreds of millions - perhaps, like those seen at the New York's Metropolitan Museum of Art -- even $300 million.

On "The Early Show," co-anchor Jeff Glor remarked, "My mother just moved in Buffalo. She should check the boxes extra special just to make sure!."

How A Blind Teen 'Sees' With Sound