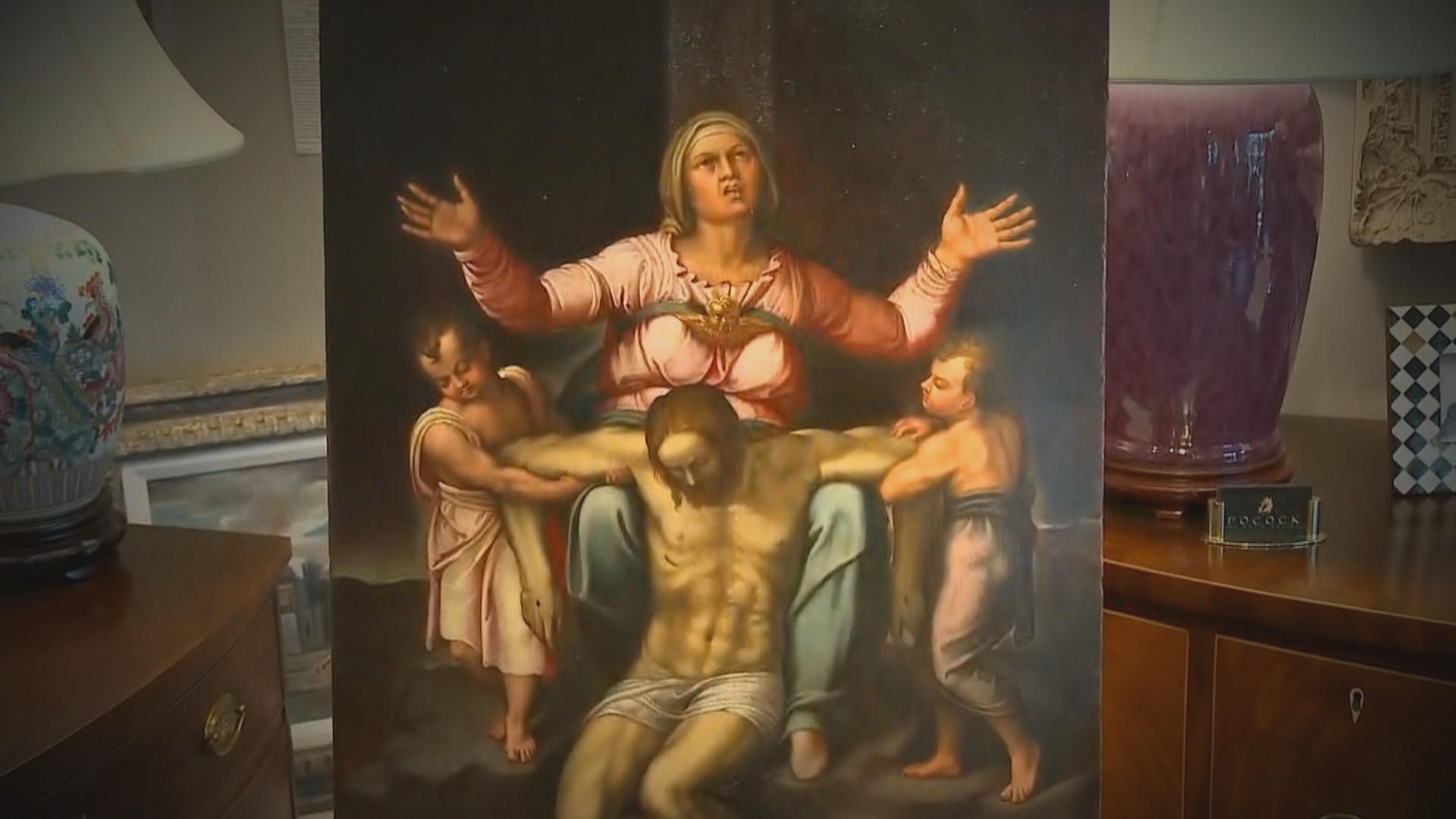 Inside a simple wooden box lies a 500-year-old mystery.

It is either the work of one of the greatest of Renaissance artists or a magnificent fake. The owner of the painting, Marty Kober, has spent 15 years trying to prove the former, reports CBS News correspondent Don Dahler.

It may be one of two paintings called the "Lost Michelangelo's" by a renowned Italian scholar and restorer who wrote about the paintings in a 2011 book.

"We have a pretty good dossier of supporting evidence," Kober said of the painting he believes to be the work of "the greatest artist of all time."

If Kober is correct, the painting could be worth millions.

The tempera-on-wood painting depicts Jesus being lowered from the cross by a pair of angels, and placed in the lap of an anguished Virgin Mary.

The five century-old piece of art hung on the Kober family's mantle outside Rochester, New York, for years.

It wasn't always treated with the greatest of care and one time even fell off the wall.

"Parents dusting it one day -- prior to that, I bounced a tennis ball off it a few times," Kober said.

Once Kober inherited it outright, he resolved to protect the painting and began investigating its history.

Many American experts refused to look at it so he took the work to Italy for extensive restoration and investigation.

"What we noticed is there are multiple changes from the underdrawings to the painting phase, a copy-ist would never do that," Kober said.

Under the microscope, a tantalizing clue was discovered: fingerprints. But when compared to one that Michelangelo accidentally left on a sculpture, the results proved inconclusive.

Kober believes there are other more definitive fingerprints - the style of painting.

"The tempera, the layering and the pigments are virtually the same," Kober said.

The former Air Force pilot says he has other extensive documentation that indicates the painting was a gift from the master to one of his closest friends.

Other documents supposedly trace ownership from her all the way to Kober's great-great-grandfather's sister-in-law.

"I was enormously impressed by this picture," said William Wallace, an art history professor at Washington University.

Wallace is a top Michelangelo expert. He's convinced the work at least comes from the master's inner circle, but he said, "There's no scientific way to determine this -- it's a matter of opinion, of numerous numbers of scholars over time and unfortunately we just have to wait."

Kober says this has become his life's quest.

"Yeah, I'm that guy that just won't go away -- we have great institutions, the best equipment. They can look at this all over again and when you assemble all of that, the documents, the painting itself, it only can point to one thing -- the greatest artist of all time, Michelangelo, made this," Kober said.

Kober insists the hundreds of millions the painting could be worth is not his primary mission -- he wants Michelangelo to get credit for what he sees as one of the most beautiful paintings of the period.

And he wants art scholars to be able to study one of the only examples of this kind of painting the great master ever did.