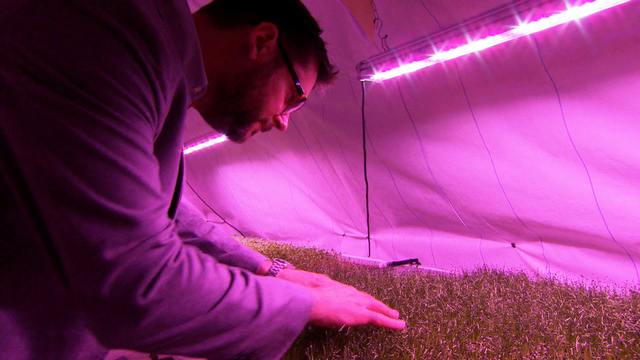 He's all about sourcing local ingredients, which is what made this particular discovery such a surprise.

It was literally right under his nose - more than 100 feet below in a vast network of unused tunnels. They're home, now, to an underground farm of herbs and mini-vegetables bathed in fluorescent light and designed to suit the most sophisticated of palates.

"Miniature leek, I mean tiny, tiny leaf," Roux told CBS News' Charlie D'Agata. "This really does pack a punch of leek. Take a little taste of that, and it really is it's intense leek flavor."

Roux's partners, budding entrepreneurs Richard Ballard and Steven Dring, are the ones responsible for taking urban farming to a whole new sublevel.

Dring said the idea came to them in a pub.

Crazy as it sounded, it began to make a lot of sense - all this wasted space sealed off from the city high above.

They grow coriander, red lion mustard, tiny leeks, pea shoots and radishes, all fed by hydroponics, a system of water that flushes through seeds sewn into recycled carpets and light-emitting diode lights that keep the temperature up to around 68 degrees.

Their little garden patch is just the beginning. They intend to fill all 2.5 acres of growing space.

They've got plenty of room to grow. The network of tunnels alone is almost five football fields long and during the war would have provided shelter for 8,000 people.

The tunnels serve as a sentimental reminder of the British can-do spirit - a whole life underground while German aircraft blitzed London in World War II.

Back at Le Gavroche, his Michelin-starred restaurant, D'Agata asked Roux whether he was risking his reputation on something some might see as a gimmick.

"I have signed, and I'm committed to this," said Roux. "It's a passion. Anything I do, and I agree to do, I do with a passion. It may not sound lipsmacking, but it's the taste that counts. It really is."

And it is a taste, he says, that can only come from going from tunnel to table in a matter of minutes.