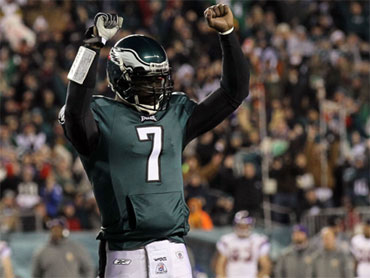 Michael Vick's sensational comeback season made a big impression throughout the NFL, not just in Philadelphia.

The Eagles' quarterback, who sat out two seasons while serving a federal sentence for dogfighting, will start for the NFC in the Jan. 30 Pro Bowl in Honolulu.

Vick was selected in a leaguewide vote by NFL players, coaches and fans.

Vick made three Pro Bowls with Atlanta before he was suspended by the league and served jail time for running a dogfighting ring. This season, he has gone from a seldom-used backup to the NFC's leading passer, the catalyst for Philadelphia's dynamic offense. Besides Vick, the Eagles had four other players selected.

Atlanta, which leads the NFC with a 12-3 record, had the most Pro Bowlers with seven, including quarterback Matt Ryan, receiver Roddy White and defensive end John Abraham.

New England (13-2), the AFC leader, had six Pro Bowlers, led by QB Tom Brady, the league's top passer who will make his sixth trip to the game — providing the Patriots don't make the Super Bowl. The game will be played the Sunday before the title game at Dallas Cowboys Stadium.

Four rookies were chosen, with DT Ndamukong Suh of Detroit a starter for the NFC. Cornerback Devin McCourty of New England, kick returner Marc Mariani of Tennessee and center Maurkice Pouncey of Pittsburgh made the AFC squad.

"It's a tremendous honor, obviously being a rookie and getting my feet wet in the NFL," Suh said. "I can't expect anything more ... it's only going to make me want to work harder to get back there again."

Altogether, there were seven first-timers on the NFC squad, 14 newcomers for the AFC.

The only teams not represented were Buffalo, Cincinnati, Seattle and Tampa Bay.

Also chosen from the Eagles were receiver DeSean Jackson, tackle Jason Peters, cornerback Asante Samuel and placekicker David Akers. Philadelphia was playing Minnesota on Tuesday night and Vick was not available before the game to comment.

Joining Brady in Honolulu from the Patriots will be McCourty; guard Logan Mankins, who missed a portion of the season in a contract dispute; linebacker Jerod Mayo; safety Brandon Merriweather; and nose tackle Vince Wilfork.

Starting for the NFC with Vick will be White and Detroit's Calvin Johnson at wide receiver, Dallas TE Jason Witten, Atlanta's Turner and Mughelli in the backfield, Peters and Carolina's Jordan Gross at tackle, the Giants' Chris Snee and Saints' Jahri Evans at guard, and Dallas center Andre Gurode.

On defense for the NFC will be ends Julius Peppers of Chicago and Abraham, tackles Suh and Jay Ratliff of Dallas, linebackers Clay Matthews of Green Bay, DeMarcus Ware of Dallas and Patrick Willis of San Francisco, cornerbacks Samuel and Charles Woodson of Green Bay, and safeties Nick Collins of Green Bay and Adrian Wilson of Arizona.

The NFC punter is Dallas' Mat McBriar, while Chicago's Devin Hester is the kick returner.

Backup quarterbacks for the NFC are Ryan and Drew Brees.

"First off, it's truly an honor just to be in the conversation of being a Pro Bowl player, but to make it two years in a row, I'm real fortunate and appreciative for the opportunity," Matthews said. "Hopefully we'll be busy at the time."

Baltimore's Billy Cundiff is the placekicker, Oakland's Shane Lechler the punter, Mariani the kick returner and Montell Owens of Jacksonville the special teamer.

Colts QB Peyton Manning made his 11th Pro Bowl as a backup to Brady. He joined Brett Favre as the only quarterbacks selected to at least 11 games.

San Diego's Philip Rivers is the other AFC quarterback.

"Wow, No. 12 feels like No. 1," Lewis said. "I tell my teammates that I am going to train to be a Pro Bowl player that season, and my focus paid off again this season. This never gets old."