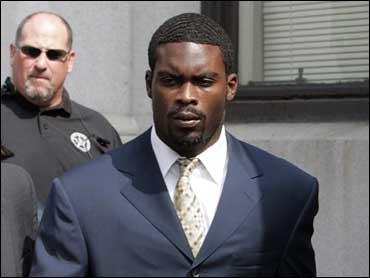 Michael Vick was sentenced to 23 months in prison Monday for running a "cruel and inhumane" dogfighting ring and lying about it.

The suspended Atlanta Falcons quarterback could have been sentenced up to five years by U.S. District Judge Henry E. Hudson. Vick, who turned himself in Nov. 19 in anticipation of his sentence, was wearing a black-and-white striped prison suit.

After Vick apologized to the court and his family, Hudson told him: "You need to apologize to the millions of young people who looked up to you."

The 27-year-old player acknowledged using "poor judgment" and added, "I'm willing to deal with the consequences and accept responsibility for my actions."

Although there is no parole in the federal system, rules governing time off for good behavior could reduce Vick's prison stay by about three months, resulting in a summer 2009 release.

"You were instrumental in promoting, funding and facilitating this cruel and inhumane sporting activity," Hudson told Vick.

The judge is a former prosecutor, with a reputation for tough sentences from the bench with photographs of his own dogs hanging in his office, says CBS News chief legal analyst Andrew Cohen.

"You add all that up and you get what Vick got: A tough sentence," says Cohen.

Before the hearing, Michael Vick's brother, Marcus Vick, sat with his right arm around their mother, comforting her as she buried her head in her hands and wept.

"This is a difficult day for Michael's family and for a lot of us, including many of our players and fans who have been emotionally invested in Michael over the years," Blank said. "We sincerely hope that Michael will use this time to continue to focus his efforts on making positive changes in his life, and we wish him well in that regard."

Vick was suspended without pay by the NFL and lost all his lucrative endorsement deals. The league had no comment Monday on the judge's ruling.

One of Vick's attorneys, Lawrence Woodward, asked for leniency. He said Vick "grew up on some of probably the meanest and roughest streets in this commonwealth," but had never been in trouble with the law and had done much for charities.

Vick was denied any credit for taking responsibility for his crime. Hudson agreed with a federal probation officer's finding that Vick had lied about his hands-on killing of dogs and about his drug use. Vick tested positive for marijuana Sept. 13, violating conditions of his release while he awaited sentencing.

Hudson recalled that Vick at one point said he only handed over two dogs to co-defendant Quanis Phillips, who killed them. On another occasion, Vick said he dropped a dog after Phillips tied a rope around the animal's neck, the judge added.

Federal sentencing guidelines called for a term of 18 months to two years. Federal prosecutor Michael Gill asked for a sentence at the high end, meaning Vick would get more time than either of the two co-defendants sentenced last month.

"He did more than fund it," Gill said, referring to the "Bad Newz Kennels" dogfighting operation. "He was in this thing up to his neck with the other defendants."

Outside court, Woodward said Vick didn't want anyone feeling sorry for him.

"He just wants a chance to prove himself when all this is over," he said. "But the other thing he said to me, which I also think is important for everyone to know, is that he understood that some of the things he was doing in life and off the field were dangerous, and he told me he feels lucky that he's alive and not hurt and now it's all about the future."

"This was an efficient, professional, and thorough investigation that well exposed a seamy side of our society," he said in a statement. "I trust Mr. Vick learned important lessons and that his admission of guilt will speed his rehabilitation."

Vick pleaded guilty in August, admitting he bankrolled the dogfighting operation and helped kill six to eight dogs. He has been held at a jail in Warsaw, Va., since he voluntarily began serving his sentence.

In a plea agreement, he admitted bankrolling the dogfighting ring on his 15-acre property in rural Virginia and helping kill pit bulls that did not perform well in test fights. He also admitted providing money for bets on the fights but said he never shared in any winnings.

At a news conference after pleading guilty last summer, Vick apologized to the NFL, the Falcons and youngsters who viewed him as a role model and vowed: "I will redeem myself."

Court papers revealed gruesome details about Vick's dogfighting operation, including the execution of underperforming dogs by electrocution, drowning, hanging and other means. Those details prompted a public backlash against the once-popular NFL star and outraged animal-rights groups, which used the case to call attention to the brutality of dogfighting.

"I'm sure Vick is not shocked by this and really the only thing he could do now would be to appeal this sentence and argue that the judge somehow was unfair," says Cohen. "But that argument almost certainly would go nowhere."

John Goodwin of the Humane Society of the United States called the sentence appropriate.

Two co-defendants were sentenced Nov. 30. Purnell Peace, of Virginia Beach, got 18 months. Phillips, of Atlanta, got 21 months. Another co-defendant, Tony Taylor, will be sentenced Friday.

The case began in April when a drug investigation of Vick's cousin led authorities to the former Virginia Tech star's Surry County property, where they found dozens of pit bulls - some of them injured - and equipment associated with dogfighting.

Vick initially denied any knowledge about dogfighting on the property. He changed his story after the three co-defendants pleaded guilty and agreed to cooperate with the government.

By 8 a.m. Monday, about 50 people were in line outside the courthouse waiting for the doors to open. About two dozen animal rights activists stood across the street holding posters showing injured pit bulls and the messages, "Report Dogfighters" and "Dogs Deserve Justice."

"We want to make sure the focus on the animals in this case isn't lost," said Dan Shannon, spokesman for People for the Ethical Treatment of Animals.

Julia Novak arrived with her small beagle, Frankie, who wore a sandwich board with the message on one side: "Dogfighters use dogs like me for bait."

Ryan Eanes, 27, of Richmond, wore his No. 7 Vick jersey as he waited in line.

"We all make mistakes," Eanes said. "I don't support the situation with the animals, but I support him. I believe his apology is sincere."

Bonds HR Ball To Be Branded With Asterisk