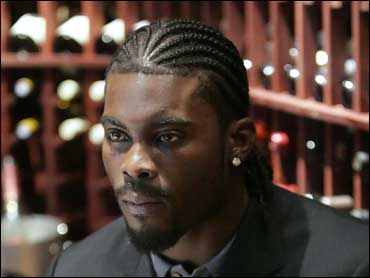 Vick and three others were charged with violating federal laws against competitive dog fighting, procuring and training pit bulls for fighting and conducting the enterprise across state lines.

Vick and the other defendants — Purnell A. Peace, Quanis L. Phillips and Tony Taylor — were involved in an ongoing animal fighting venture based out of Vick's home in Smithfield, Va., from early 2001 to April 2007, according to a statement released by the office of the U.S. Attorney for the Eastern District of Virginia.

Vick faces $350,000 in fines and six years in prison if convicted of the charges.

Telephone messages left at the offices and home of Vick's attorney, Larry Woodward, were not immediately returned.

A woman who answered the phone at the home of Vick's mother said the family knew nothing about the charges.

On July 7, federal authorities conducted a second search of the Surry, Va., property owned by Vick that is the center of the dog fighting investigation.

According to court documents filed by federal authorities earlier this month, dog fights have been sponsored by "Bad Newz Kennels" at the property since at least 2002. For the events, participants and dogs traveled from South Carolina, North Carolina, Maryland, New York, Texas and other states.

Fifty-four pit bulls were recovered from the property during searches in April, along with a "rape stand," used to hold dogs in place for mating; an electric treadmill modified for dogs; and a bloodied piece of carpeting, the documents said.

During a June search of the property, investigators uncovered the graves of seven pit bulls that were killed by members of "Bad Newz Kennels" following sessions to test whether the dogs would be good fighters, the documents alleged.

Members of "Bad Newz Kennels" also sponsored and exhibited fights in other parts of Virginia, North Carolina, South Carolina, Maryland, New Jersey and other states, according to the filings.

On Vick's Web site, he lists his birthplace as Newport News, "a.k.a. BadNews."

The documents said the fights usually occurred late at night or in the early morning and would last several hours.

Before fights, participating dogs of the same sex would be weighed and bathed, according to the filings. Opposing dogs would be washed to remove any poison or narcotic placed on the dog's coat that could affect the other dog's performance.

Sometimes, dogs weren't fed to "make it more hungry for the other dog."

Fights would end when one dog died or with the surrender of the losing dog, which was sometimes put to death by drowning, strangulation, hanging, gun shot, electrocution or some other method, according to the documents.

Vick initially said he had no idea the property might have been used in a criminal enterprise and blamed family members for taking advantage of his generosity.

Vick has since declined to talk about the investigation.