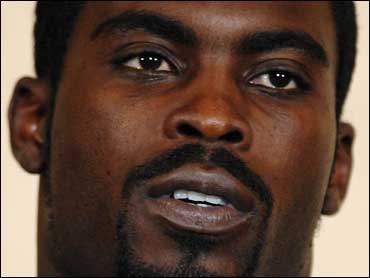 Even after Vick pled guilty to federal felony dog fighting charges and admitted to killing pit bulls, many black Americans feel that Vick has been the object of overzealous vengeance by authorities.

A CBS News/New York Times poll taken before Vick entered his plea showed that 32 percent of black Americans believe Vick's status as a star athlete has caused him to receive worse treatment by the authorities, compared to only 6 percent of white Americans.

Falcons fans at Playmakers, a barbershop that caters to a mostly African-American clientele in Atlanta, said while they may not approve of dogfighting, they still support Vick because they believe him to be a victim of a racist judicial system.

"It's bad. I don't condone it at all, but the punishment is too severe. They're ruining a man's career," barber Dontrell Mapp told CBS 46.

Vick, who grew up in the projects of Newport News, Virginia is still considered a hero among those who know him personally. Many have cited his generosity to locals in need as well as the fact the he donated money to assist families affected by the massacre at his alma mater, Virginia Tech. Most Falcons fans agree that he is responsible for the sold out games in Atlanta.

More than half of the team's season ticket holders are African-American.

"It's kind of a touchy subject," Jeff Richwagens, a 53-year-old white software developer told the Los Angeles Times."It's difficult to have a conversation about Vick that's not muddied by race."

The case against Vick has unleashed a national debate on how athletes are treated by the press and by the police.

"When we scratched the surface of our poll data on Michael Vick, we found a significant racial gap," says CBS News Deputy Director of Surveys Sarah Dutton. "There was a similar gap in data about Barry Bonds earlier in the summer, with more African-Americans saying that race was a factor in the allegations of steroid use, and that those allegations weren't true."

Whether or not Vick is being treated the same as any other man, black or white, is complicated by his enormous wealth.

"He may in fact be being treated better than some African-Americans and Hispanics who don't have the resources and financial means that he has," said Dennis Courtland Hayes, interim president and CEO of the NAACP. "On the other hand, there might be some of a different race or different ethnicity who might be treated a bit differently."

Anyone who pleads guilty or is convicted of Vick's crime would face the same approximate sentence under the federal guidelines, says CBS News Legal Analyst Andrew Cohen. But that doesn't change the apparent feeling by many black Americans that Vick is being made a scapegoat for animal cruelty.

"I personally wouldn't mind if Vick were banned for life as long as there was a full investigation to root out the entire sub-culture of dogfighting, drug taking and gangster-ism in the NFL," says Gerald Early, a professor at Washington University in St. Louis who has written extensively about black Americans in sports. "But since Vick is likely to be just a fall guy, he should be permitted to return."

There is also a sense of disappointment in Vick, especially from those who believed him when he professed his innocence. Many hope he can achieve some redemption, if he is truly sorry.

"What he needs to do when he comes out (of prison) is to call a press conference and explain where a young man making $130 million would get caught up in something like that," said Gerald Rose, a local civil rights group leader who had organized a march in support of Vick a month earlier.

There has also been a split among black and whites on how seriously to take Vick's ill-treatment of his animals and his violent methods of dealing with the pit bulls that did not perform to his satisfaction. Animal rights groups have demanded maximum punishment for Vick while others think the charges are overblown.

"He's made this city a ton of money every Sunday," Hiram Melvin, 50, of Decatur, Georgia told the Atlanta Journal Constitution. "This dogfighting has been going on for years. It's not something that just started. It's not a big deal."

Bobby J. Brown, director of the 2005 documentary "Off the Chain," says that dog fighting indicates a larger problem: America's obsession with violence.

"When people have no feeling for animals, when they will steal your pet from your yard to use as bait, to kill dogs without a thought, that's scary," says Brown. "That doesn't bode well for us as a society."

It's too soon to tell if America will ever forget Vick's participation in dogfighting but there are signs that he may some day be forgiven. PETA has reached out to Vick, offering signs of approval for his statement that killing dogs for sport is a "terrible thing." The NFL and the Atlanta Falcons haven't ruled out Vick's chances of playing again.

Now that the preseason has begun, Atlanta fans want to get on with their season, without or without Vick. Fans, both black and white, have come out and said that now that he's come out and apologized, he should be allowed to play professional football again.

"It didn't make a difference before he apologized," said Evette Summers, an African-American Falcons fan told CBS 46 just before the first preseason game against the Cincinnati Bengals. "I look at his age and I look at life and we've all made mistakes."

"He admitted his guilt," said Carl Conforti, a white Falcons fan. "Let him go ahead and do his time and then let him come out and play."