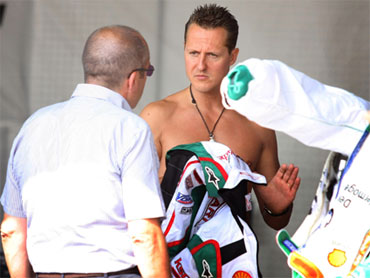 Seven-time Formula One champion Michael Schumacher is coming out of retirement to drive for Mercedes in 2010, saying he expects to contend for the title again.

The German, who turns 41 on Jan. 3, announced his comeback on Wednesday after three years away from the sport that he dominated for the first half of the decade.

"Three years of absence gave back all the energy that I'm feeling right now," Schumacher said in a telephone conference. "I feel ready for some serious stuff.

"I still feel absolutely on the edge. It's thrilling and exciting. I believe I can be absolutely competitive."

Schumacher, who will join Nico Rosberg in an all-German team for the 2010 season, said he and Mercedes are in discussions about a deal through the 2012 season.

"We are talking about a three-year deal. It's not a one-off thing," Schumacher said. "We are looking for some continuation."

"I am convinced that together we will be involved in the fight for the Formula 1 World Championship next year," he said.

Schumacher had planned a short-term comeback with Ferrari last season to fill in for the injured Felipe Massa, but he had to call that off due to a neck injury from a motorcycle accident.

"I made sure myself, and 100 percent with the neck there are no more issues," he said. "There has been enough time now for it to heal completely."

Schumacher had been working as a consultant with Ferrari since his retirement, attending some F1 races. He said he had not envisioned a permanent comeback until approached by Mercedes team principal Ross Brawn — the man who oversaw the German's seven world titles: five with Ferrari and two with Benetton.

The return also gives Schumacher a chance to pay back Mercedes, which steered his pre-F1 career.

"The one reason I seriously thought about my return is its because an old friend asked me," Schumacher said. "Mercedes gave me a chance to enter Formula One and throughout the years we were never able to work together, but now I have that chance. I am happy to give back for what Mercedes gave me in the early days."

"I was not thinking I would have an offer," Schumacher said. "I could not have imagined I would have returned. Due to this special combination, that no one could have planned in advance, I just thought, 'Why not?"'