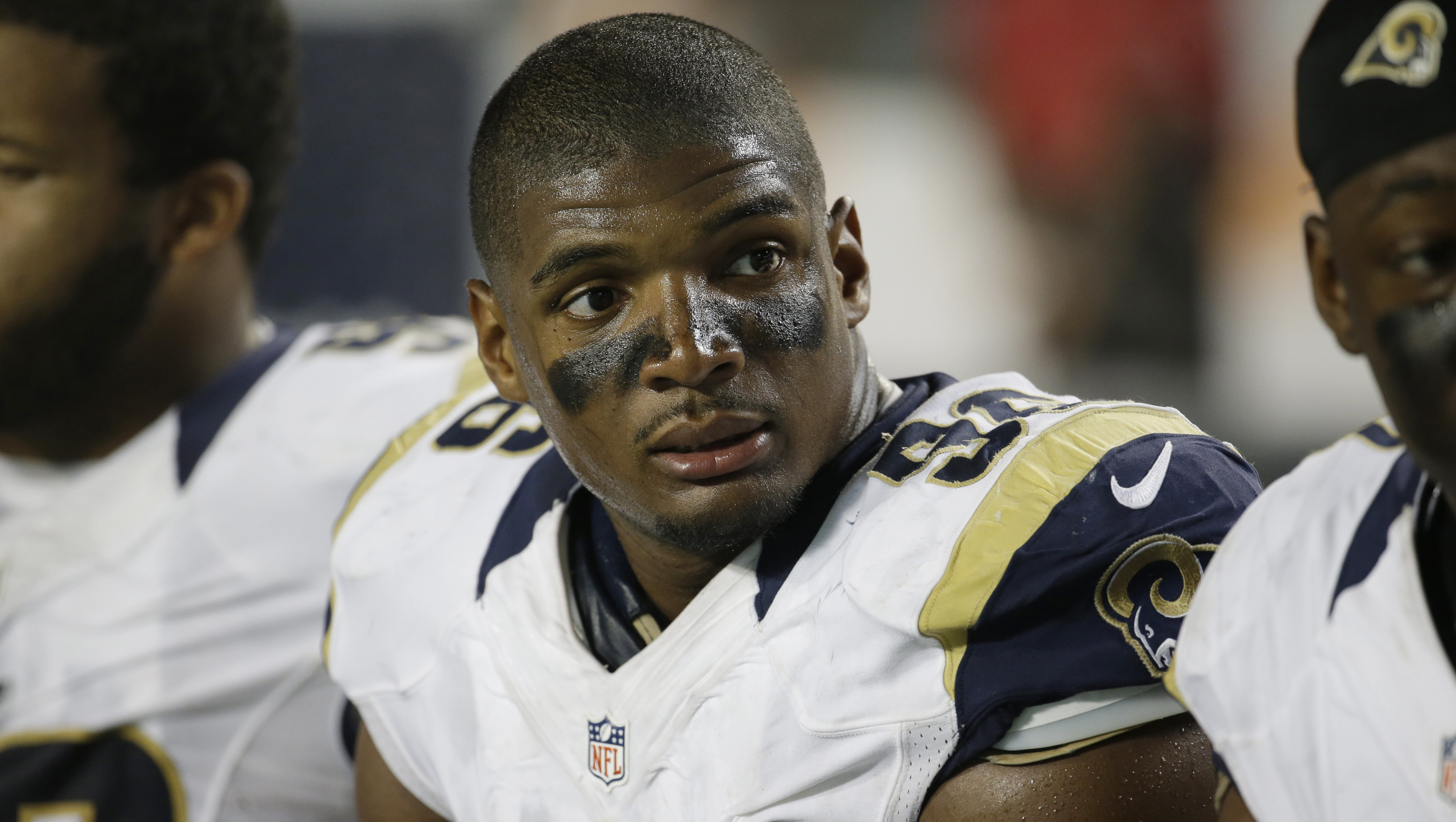 The seventh-round pick has been outspoken and confident as his progress was watched as closely as any rookie in the league. He has been cheered by athletes and celebrities. In the end, the defensive end couldn't make a team stocked with pass-rushers.

"I want to thank the entire Rams organization and the city of St. Louis for giving me this tremendous opportunity and allowing me to show I can play at this level. I look forward to continuing to build on the progress I made here toward a long and successful career," Sam said in a statement posted on Twitter.

"The most worthwhile things in life rarely come easy, this is a lesson I've always known. The journey continues," he said.

Sam still has a chance to get picked up by another team or to make the Rams' practice squad.

"There will be no challenge, no challenges whatsoever," for whatever team picks up Sam, Rams coach Jeff Fisher said at a news conference.

"There's no challenge with respect to Mike Sam," Fisher said. "He's not about drawing attention to himself. He kept his head down and worked and you can't ask anything more out of any player for that matter."

On Saturday, he attended Missouri's opener in Columbia, a 1 1/2-hour drive west on I-70 from Rams Park. He was introduced to the crowd in the end zone alongside defensive E.J. Gaines, a sixth-round pick who made the team.

Sam blew a kiss and waved to the crowd, then walked back to the sideline. He posed for a few pictures then started looking at his phone and headed for the locker room.

The Rams selected Sam, the SEC co-defensive player of the year at Missouri, with the 249th overall pick out of 256 overall. He kissed his boyfriend as a national television audience looked on, and arrived brimming with confidence and with a quick retort for anyone who contended he was in the NFL only because he came out.

Fisher was proud to have made the landmark pick, but he made clear from the start that he chose Sam because he thought he had the talent to make it.

The cameras followed, but the extra attention did not seem to faze Sam or his teammates. Veteran defensive end Chris Long noted rosters are always made up of players from different backgrounds. Players said Sam was part of their family.

Fisher called the draft pick a "second historic moment" for a franchise that signed running back Kenny Washington in 1946 as the league's first black player in the modern era, but he was most interested in describing Sam as a way to upgrade the Rams' defense. So was general manager Les Snead, who referred to Sam after the draft as a "designated pass rusher." Sam recognized the challenge, so he shed weight to be faster for special teams duty, reporting at 257 pounds.

After the Rams' first preseason game, a 26-24 loss to New Orleans, Fisher said Sam played "pretty well" but also made his share of mistakes. Sam, who was credited with one tackle and one quarterback hit in the game, emerged with confidence.

Sam came out following his final season at Missouri, though he had told his teammates before it began. The Tigers went on to tie a school record with 12 wins. Sam had 11 1/2 sacks and the lightly-regarded Tigers won the SEC Eastern Division, a huge step forward after going 5-7 during the first season in their new conference.

"If you look at our season, it didn't hurt us at all," recalled cornerback E.J. Gaines, a fellow rookie and former Missouri teammate. "If anything, it brought us closer."

Sam was lightly regarded out of Hitchcock, Texas, a town of about 7,000 along the Gulf Coast about 40 miles southeast of Houston. His first two years at Missouri, Sam backed up Aldon Smith and Jacquies Smith, both of whom are in the NFL.

The Rams drafted Sam even though they didn't need help at defensive end, where they have a pair of first-round picks as starters. The Rams were so well-stocked with picks, taking 11 players overall, they had leeway to take a shot. Fisher said Sam's value as a player "was off the charts."

"I'm determined to be great," Sam said at his introductory news conference, packed with reporters. "I understand that right now you guys want to make a big deal of it."

From the start, teammates seemed to like having Sam around. His energy was infectious and, if there were problems, they stayed behind closed doors. Publicly, Sam was just another late-round pick trying to make the Rams, which, like other NFL teams, held sensitivity training early in camp. The Oprah Winfrey Network put off a planned documentary on Sam, saying it would allow him to focus on his dream of making the team.

At one point, Sam's Rams jersey was the No. 2 seller among rookies at NFLShop.com, trailing only Cleveland's Johnny Manziel, and Sam was among just 10 draftees selected by the NFL to be featured on commemorative coins. Sam headed to the ESPY Awards to pick up the Arthur Ashe Courage award. He got a hug from Hall of Famer Jim Brown on his way to the stage and fought back tears throughout his speech.

"Great things can happen when you have the courage to be yourself," he told the audience.

At least 6 killed in shooting at Fourth of July parade in Illinois; gunman at large