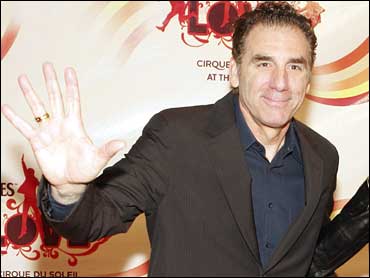 Just when it seemed Michael Richards was about to leave the most troubling incident of his career behind, his publicist is having to explain how the comic could consider himself to be Jewish.

Last week, crisis-management expert Howard Rubenstein acknowledged that Richards had shouted anti-Semitic remarks in an April standup comedy routine — well before his appearance earlier this month in which he harangued hecklers with the n-word. But he defended Richards' language about Jews, saying that the comic "is Jewish. He's not anti-Semitic at all. He was role-playing."

As Rubenstein's assertion circulated, Jewish organizations and commentators pointed out that the man who played Cosmo Kramer on "Seinfeld" has not converted to Judaism and neither of his parents are Jewish.

"Technically, not having been born by blood as Jewish and not formally going into a conversion, it was purely his interpretation of having adopted Judaism as his religion," Rubenstein told The Associated Press on Tuesday. "He told me, `I'm Jewish,' when I asked him.

"He said there were two mentors who raised him and who had a big influence on his life, and they were Jewish. He said, `I agree with the concepts and the religious beliefs of Judaism and I've adopted Judaism as my religion,"' Rubenstein said. "He really thinks of himself as Jewish."

What do some Jews think?

Hier defined being Jewish from two perspectives, if someone has not gone through the process of formal conversion.

"From the Orthodox point of view, if that person has a Jewish mother, he would be considered Jewish," Hier said. "In the Reform tradition, there's also a patrilineage. Under those categories, he would not fit."

Rabbi Mark S. Diamond of the 280-member Board of Rabbis of Southern California agreed.

"There are many people who appreciate Jewish customs, who may embrace aspects of Jewish culture and practice, but that does not make them Jewish," he said.

After his tirade came to light, Richards apologized on David Letterman's "Late Show" on CBS, saying his remarks were sparked by anger at being heckled, not bigotry. He also apologized to the Rev. Al Sharpton, a black civil rights leader, and apologized Sunday on the Rev. Jesse Jackson's syndicated radio program.

Rubenstein said Richards was not available for an interview Tuesday.

"He wants to rest," the publicist said. "He's been talking to his psychiatrist."
By Solvej Schou

Best-selling writers rally around new author stood up at book signing
Thanks for reading CBS NEWS.
Create your free account or log in
for more features.
View CBS News In
CBS News App Open
Chrome Safari Continue
Be the first to know
Get browser notifications for breaking news, live events, and exclusive reporting.