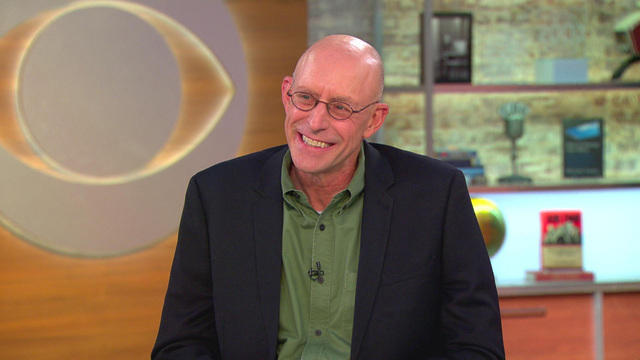 After decades in the shadows, psychedelic drugs are the focus of new studies testing their efficacy at treating a variety of psychological issues, including depression.

Back in the 1950s, tens of thousands of patients were treated with psychedelics such as LSD. But the 1960s saw a dramatic shift in America's view of psychedelics. The research was halted, and erased from mainstream medicine.

Bestselling author Michael Pollan has written about the potential uses for LSD and psilocybins (so-called "magic mushrooms") in his new book, "How to Change Your Mind: What the New Science of Psychedelics Teaches Us About Consciousness, Dying, Addiction, Depression, and Transcendence." (Penguin).

Appearing on "CBS This Morning" Monday, Pollan was asked how he started in his research into psychedelics.

"I was reading some of these studies which I thought were, frankly, so crazy and implausible – people who were dying of cancer, struggling with depression and anxiety and fear, being given psychedelic drugs, psilocybin specifically, which is the ingredient in so-called magic mushrooms. to help them deal with, confront their mortality. And that seemed so odd to me that I wanted to explore what it was about.

"And I started interviewing these people. They had a single guided psychedelic session; in other words, they were with someone the whole time, they're wearing eye shades, listening to music. They would have an experience where they went into their bodies, confronted their cancer, looked at what would happen to them after they died, had these powerful spiritual experiences, and they emerged having lost their fear and anxiety in 80 percent of the cases."

Co-host John Dickerson asked Pollan about the difficulty of writing about illicit or illegal drugs.

"Like everybody else, my image of LSD and psilocybin was that '60s image of drugs that were being used as party drugs very carelessly, kids taking them to go to concerts and things like that," Pollan said. "I had no idea that long before that, they were thought of as psychiatric wonder drugs. And when they escaped the lab and were embraced by the counter-culture was when you got this backlash, and we're still kind of getting over that backlash."

The most promising studies, Pollan said, show that the drugs are very useful in dealing with depression.

"It's important to understand how few tools psychiatry has to deal with mental health problems in general," he said. "The last major innovation was the introduction of Prozac in the late '80s, and those anti-depressants aren't working very well anymore. They're fading in their effects, they only do a little bit better than placebos in trials, and people hate the side effects – they're very hard to get off of."

"We have very few tools to help people who have fear and anxiety as a result of a terminal cancer diagnosis. Prozac doesn't help them. We need to address what is really a psycho-spiritual distress, and these drugs appear to help with that, and they're part of this conversation we're having about the culture and how to die.

"I think that is really why they [psychedelics] will be approved, because there's really nothing else for people in that situation. And this really does appear to help them reset and confront their death with more of a sense of equanimity and perhaps the sense that the end of themselves, their own egos, may not be everything they contributed."

Pollan also talked about this experience with "magic mushrooms" as part of his research.

"I tried psilocybin," he said. "I was very interested in duplicating the research that was going on at Johns Hopkins and NYU. I had a guided psilocybin trip – it was underground because I didn't qualify for any of the trials – and I worked with a guy who was very talented, very professional.

"I had this incredible experience (it was a fairly high-dose experience) of my ego or sense of self absolutely dissolving until I saw myself – and I know this sounds paradoxical – spread out over the landscape like a coat of paint, yet I was still perceiving this.

"And it made me realize for the first time, and this is what I took away from the experience, that we're not all identical to our egos. Our egos push us around, our egos punish us, they defend us against new information from the world and from our subconscious feelings. And suddenly I saw my ego in a new light, and it was something I could control a little bit better.

"Now, I might have gotten that in ten years of psychotherapy, I don't know. But I got it in an afternoon."

Pollan admitted that there are risks to granting approval for psychedelics.

"I looked at this carefully. I was a very nervous Nellie going into this psychedelic experience. I'm a very reluctant 'psychonaut.' But they're relatively nontoxic, less toxic than alcohol. They're non-addictive; if you give a rat in a cage a lever top press and you put cocaine on it, they will press and administer cocaine until they die. Put LSD on it, they'll do it once. They're never do it again. So they're non-addictive."

That doesn't mean there's no risk. "The risks are psychological. When they're used carelessly, which is to say without a guide, sometimes people have really bad trips, most of which are just panic attacks that people recover from. But there are occasional psychotic breaks or episodes, so people really have to be careful and treat them as the powerful medicines that they are."