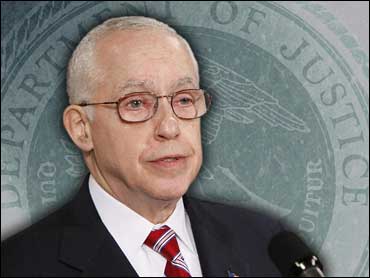 Attorney General Michael B. Mukasey reminded Senate Judiciary Committee members Wednesday that if the Congress wants to once and for all to specifically prohibit the use of an interrogation technique known as "waterboarding" it doesn't have to wait for him to call the practice illegal. It can simply and clearly abolish the technique by statute-something it has repeatedly failed or been unwilling to do over the past few years.

In remarks prepared for an oversight hearing, and then again in person on Capitol Hill, Mukasey threw back at the legislators some of their own arguments from two years ago, when the Congress debated an end to waterboarding as part of its deliberations over the Military Commissions Act and the Detainee Treatment Act. Both measures passed without a ban on the practice which simulates death for the suspect by briefly "drowning" him or her. Committee Democrats wanted Mukasey to firmly declare that the technique is illegal. He offered only a lawyerly response in return.

"The principle that one should refrain from addressing difficult legal questions… has even more force as to this question. That is because any answer I give could have the effect of articulating publicly- and to our adversaries-the limits and contours of generally worded laws that define the limits of a highly classified program. Indeed, I understand that a number of Senators articulated this very concern in the fall of 2006, in the course of defeating an amendment that would have expressly prohibited waterboarding."

He's right. Democrats on the Senate Judiciary Committee, especially Committee Chairman Sen. Patrick J. Leahy (D-Vt.) and Sen. Edward M. Kennedy (D-Mass.), want Mukasey to do their heavy lifting. They want him to proclaim by legal memorandum what they have so far been unable to accomplish by political power. It would be nice if he were willing to do so. And you can bet that if a majority of Republicans and the President were calling upon Mukasey to say the magic words he'd be game. But they aren't and he isn't and it's time Leahy and Company moved on.

Wednesday's hearing-a kabuki dance where everyone involved knew precisely what their counterparts were going to say before they said it-merely reaffirms that this Attorney General, not unlike that past two Bush Administration attorneys general, wants to retain for his client, the White House, all possible interrogation options in the future. We aren't waterboarding now, Mukasey said, but we don't necessarily want to foreclose it as an option down the road. And that might happen if I were to opine publicly that the tactic runs afoul of existing law (not to mention international norms).

And Mukasey's other client? The American people? As Mukasey sees it, if the citizens of this country want to unambiguously ban waterboarding they will express that desire through their elected officials who, in turn, will strengthen and expand current anti-torture laws. At that point, the client-- the people-- will have given Mukasey the requisite legal direction he seems to think he needs. Anything short of that clear direction, however, and Mukasey is going to do what he is doing now; keeping the government's legal options open.

Will we see a formal end to legal waterboarding even if the Democrats gain control of the White House and increase majorities in both houses of Congress? Don't bet on it. Unless we see a landslide that shoves out dozens of Republican legislators the GOP-aided by hawkish Democrats-- still should have a filibuster-capable minority in the Senate. And it never pays to underestimate the bureaucratic and political savvy of the nation's intelligence communities who clearly would want legal ambiguity.

So from Mukasey himself we now know this about waterboarding: it is not currently practiced, as least as far as the Department of Justice knows, but if it is in the future it may or may not be legal depending upon the circumstances. Got it? That's a shaky house of law that somehow, someway has been able to withstand months and months (years and years) of hot air blown its way by Sens. Leahy and Kennedy. They keep huffing and puffing but the waterboards stay up and, presumably, ready for use.