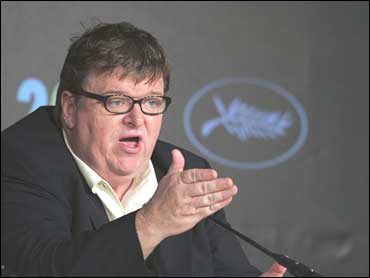 It could have been a college reunion: hugs, tears, laughter, photos, and a big friendly guy in shorts and sneakers organizing it all.

But the guy in shorts was Michael Moore, whose new documentary, "Sicko," takes aim at the U.S. health care industry with the same fury — laced with humor, of course, and plenty of statistics — that he directed at the Bush administration in his hit "Fahrenheit 9/11."

And the people who'd flown in for this intimate first screening, a day after the film had been shipped to the Cannes Film Festival, included grateful Sept. 11 "first responders," suffering lung problems or other ailments from their days at ground zero. In the film, Moore takes them to Cuba and tries to get them treated at the U.S. base at Guantanamo Bay — where, he contends, terror suspects were getting better medical care than the heroes of 9/11.

The Cuba trip actually accounts for just a small part of "Sicko," which aims its wrath at private insurance and pharmaceutical companies and HMOs, while praising socialized medicine in countries like France and Britain. Moore fills it with stories like that of a woman whose ambulance ride after a car crash wasn't covered — because it wasn't "pre-approved."

But Cuba has loomed large in the flurry of prerelease publicity. That's because the director, an unabashed critic of President Bush, is being investigated by the Treasury Department for possibly violating the U.S. trade embargo by traveling to the island nation. Moore has fired back with an open letter accusing the administration of "abusing the federal government for raw, crass political purposes."

At his screening Tuesday evening at a Manhattan hotel, however, Moore was focused on the reaction of his invited guests.

"Three years ago tonight, we had the first screening of 'Fahrenheit 9/11,' with victims' families," he told them. "It was a very powerful experience, and now we're honored to have all of you here. We're very proud of this film. We're confident it will have a significant impact."

When the lights came up, Reggie Cervantes, a former 9/11 "first responder" who now lives in Oklahoma, spoke first.

"It was funny. It was real," said Cervantes, 46, who says she suffers from pulmonary ailments, esophageal reflex, post-traumatic stress disorder, ear and eye infections and other problems stemming from time at ground zero. Of the trip, she said: "It feels surreal. Were we really there?"

"This trip opened my eyes," offered Bill Maher, 54, another former ground zero volunteer from Maywood, N.J., who had extensive dental work in Cuba. "I was uneducated. I remembered the Cuban missile crisis. Now, you know what? I'm going back!"

"I'm going with you," replied Cervantes.

Donna Smith, in from Denver with her husband, Larry, was in tears when she spoke. The film opens with their painful story: Plagued with health problems, they were forced to sell their home and move into the storage room of their daughter's house because they couldn't cope with health costs, even though they were insured.

"Health care is an embarrassment to our nation," Donna told Moore. "You give dignity to every American in this film."

Lost in all the publicity over Moore's trip is the reason he went to Cuba in the first place.

He says he hadn't intended to go, but then discovered the U.S. government was boasting of the excellent medical care it provides terror suspects detained at Guantanamo. So Moore decided that the 9/11 workers and a few other patients, all of whom had serious trouble paying for care at home, should have the same chance.

"Here the detainees were getting colonoscopies and nutrition counseling," Moore told The Associated Press in an interview, "and these people at home were suffering. I said, 'We gotta go and see if we can get these people the same treatment the government gives al Qaeda.' It seemed the only fair thing to do."

So the group, which included eight patients — three ground zero workers and five others — headed off by boat towards Guantanamo. From a distance, with cameras rolling, Moore called out through a bullhorn that he wanted to bring his friends for treatment at the naval base. He got no response.

"So there I was with a group of sick people," he says. "What was I going to do?"

The answer: head to Havana. There, the film shows the group getting thorough care from kind doctors. They don't have to fill out any long forms; health care is free in the Communist nation, after all.

But did the American film crew get special treatment because they were, well, an American film crew? Moore and his producer, Meghan O'Hara, insist not. "We demanded that we be treated on the same floor as all Cubans, not the special floor for foreigners," Moore told The AP. Still, the doctors obviously knew they were being filmed, so it's hard to know — although Cervantes said she went back alone with no cameras and was treated similarly.

Treasury officials will not comment specifically about Moore's case. He has a few more days to provide additional information. Moore originally applied in October 2006 for permission to go to Cuba under a provision for full-time journalists, but never heard back.

The patients he brought had all struggled at home with health care costs. Some, like Cervantes, had lost their health insurance because they could no longer work, and were navigating the workmen's compensation system.

John Graham, a disabled carpenter and EMT from Paramus, N.J., came to the screening with his daughters. On 9/11 he was at his job at the carpenter's union offices, near the World Trade Center. He rushed over before the second plane hit, spending 31 hours at first, then helping out for months after that. He says he was later diagnosed with lung problems, burns on his esophagus, chronic sinusitis and post-traumatic stress disorder, among other things: "I need a notebook to remember everything."

Graham, who stopped working in 2004, now lives on $400 per week in workmen's comp payments. He split from his wife and says he is unable to keep up with childcare payments.

In Cuba, Graham had five full days of medical tests and received medication for his reflux problems. Cervantes was treated for eye and nose infections, among other things, and in a drugstore found pills for only pennies that cost her more than $100 at home. Maher had the longest treatment, to correct dental problems — he said ground zero-related stress and dreams about "people falling from the sky" made him grind his teeth at night.

Moore hopes his latest film will make people stop and think about what he sees as the tragic ills of the health care industry.

"We are the richest country in the world," the director said. "We spend more on health care than any other country. Yet we have the worst health care in the Western world. Come on. We can do better than this."