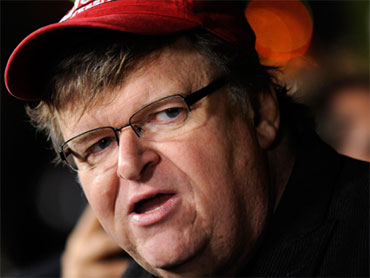 Hear the one about the comedians who went looking for a warm spot to perform in February? They wound up in northern Michigan, where snowfall tops 100 inches a year.

Actually, this is no joke. Filmmaker Michael Moore, who started a summer film festival five years ago in his adopted hometown of Traverse City, is teaming with Emmy winner Jeff Garlin to organize a mid-winter comedic counterpart.

They announced this week that the inaugural Traverse City Comedy Arts Festival will be held Feb. 19-21 - and will feature star performers, along with talented up-and-comers. The lineup will be revealed next month.

Moore, a Flint native who now lives in this Lake Michigan resort community 250 miles northwest of Detroit, said he and Garlin wanted to give at least a small boost to a state where the economy was sinking long before the nationwide downturn.

"We don't know how to help GM or Chrysler, but we can help bring a little joy and happiness to northern Michigan at a very difficult time," Moore said. "In times like these, humor should ride to the rescue."

They expect to generate at least half of the $5 million to $10 million that the longer summer festival pumps into the region's economy, he said.

In addition to stand-up performances by established comic artists, there will be acts featuring improvisational groups and premieres of comedy movies - including a short-films competition -plus a show for children.

They'll take place at the State Theatre, a refurbished, 546-seat movie house that Moore helped save from the wrecking ball, and two other downtown showplaces: the City Opera House and the Old Town Playhouse.

Garlin, a star and executive producer of the HBO series "Curb Your Enthusiasm," will host a "talk show" each night. Also planned is a special tribute to a "legendary" comedian whose identity is secret for now.

Moore said the big-name performers were appearing as a favor to him and Garlin and will receive little if any pay above expenses, which will keep ticket prices affordable. Some events will be free.

"They want to help us get something started where we're looking at comedy as an art form and supporting new satirists and humorists," he said.

The film festival and its army of volunteers will staff the comedy event. Their enthusiasm and friendliness show Traverse City is a warm place any time of year, Moore said.

But if the statement he and Garlin issued about the comedy fest is any indication, locals should prepare for a barrage of cold-weather wisecracks. It was packed with yuk-yuk references to snowmobiles, ice fishing, frostbite and slip-and-fall lawsuits.

"We wanted to do this in the deepest, darkest winter," Moore deadpanned in an interview. "When the cabin fever has really set in."