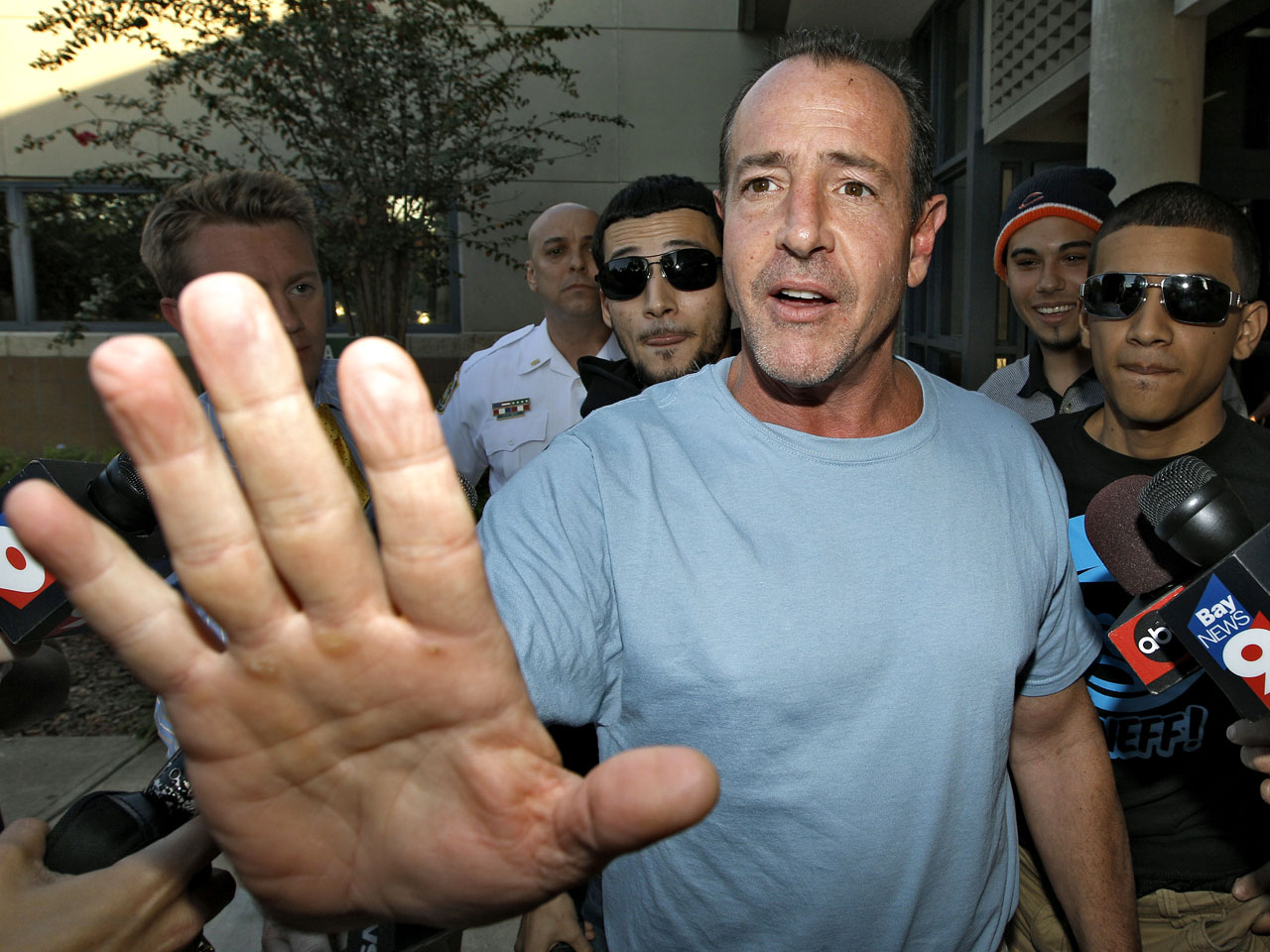 (CBS/AP) TAMPA, Fla. - Another day, another Lohan in jail.

Michael Lohan, the estranged father of actress Lindsay Lohan, is back in police custody today, arrested just hours after being released from a Tampa jail on domestic violence charges.

Tampa police responded to a 911 call from Michael Lohan's on-and-off girlfriend early Thursday. Kate Major told police Lohan, 51, made a harassing phone call to her shortly after being released from jail Wednesday afternoon.

Once police arrived at Major's condo, Lohan called again and Major, 28, put the call on speaker. After hearing what Lohan said, the police department notified the Hillsborough County State Attorney's Office of a violation of Judge Walter Heinrich's pre-trial release orders that he stay away from Major and issued an arrest order.

According to a news release from police, when Lohan spotted officers coming to arrest him at the Tahitian Inn in Tampa, he jumped off a third-floor balcony in an attempt to escape. After a short foot chase, officers apprehended Lohan, 51, and took him to the Hillsborough County Jail.

Deputies suspected he may have broken his foot when he jumped off the balcony, so he was taken to Tampa General Hospital for evaluation.

Authorities said he will be returned to the jail once he's been cleared by doctors.

Lohan was arrested Tuesday on domestic violence charges involving Major, a former reporter for the Star tabloid. According to police, he grabbed her arms and pushed her down multiple times during a daylong argument. When Lohan was released from jail Wednesday, he said he "didn't do anything" and the charges were Major's way of making money.

The St. Petersburg Times reported that Lohan claimed Major set him up to be overheard by police Thursday. "She needs help, she calls me, and I'm a sucker so I call her back. I'm an idiot," Lohan said as he was being put into the back of a police cruiser.

This episode is not the first time the couple's arguments have resulted in law enforcement intervention. In July, a misdemeanor domestic violence charge against Lohan stemming from a fight with Major was dismissed in Los Angeles after she failed to show up for the trial. Lohan's attorney said Major declined to cooperate to avoid a court spectacle.

Meanwhile, his daughter Lindsay Lohan could also return to jail in California after a judge last week ruled she violated probation involving a community service assignment. A Nov. 2 court date was set to decide whether Lindsay Lohan should be jailed.

The 25-year-old actress was given probation for a 2007 drunken driving case and a misdemeanor theft case this year.