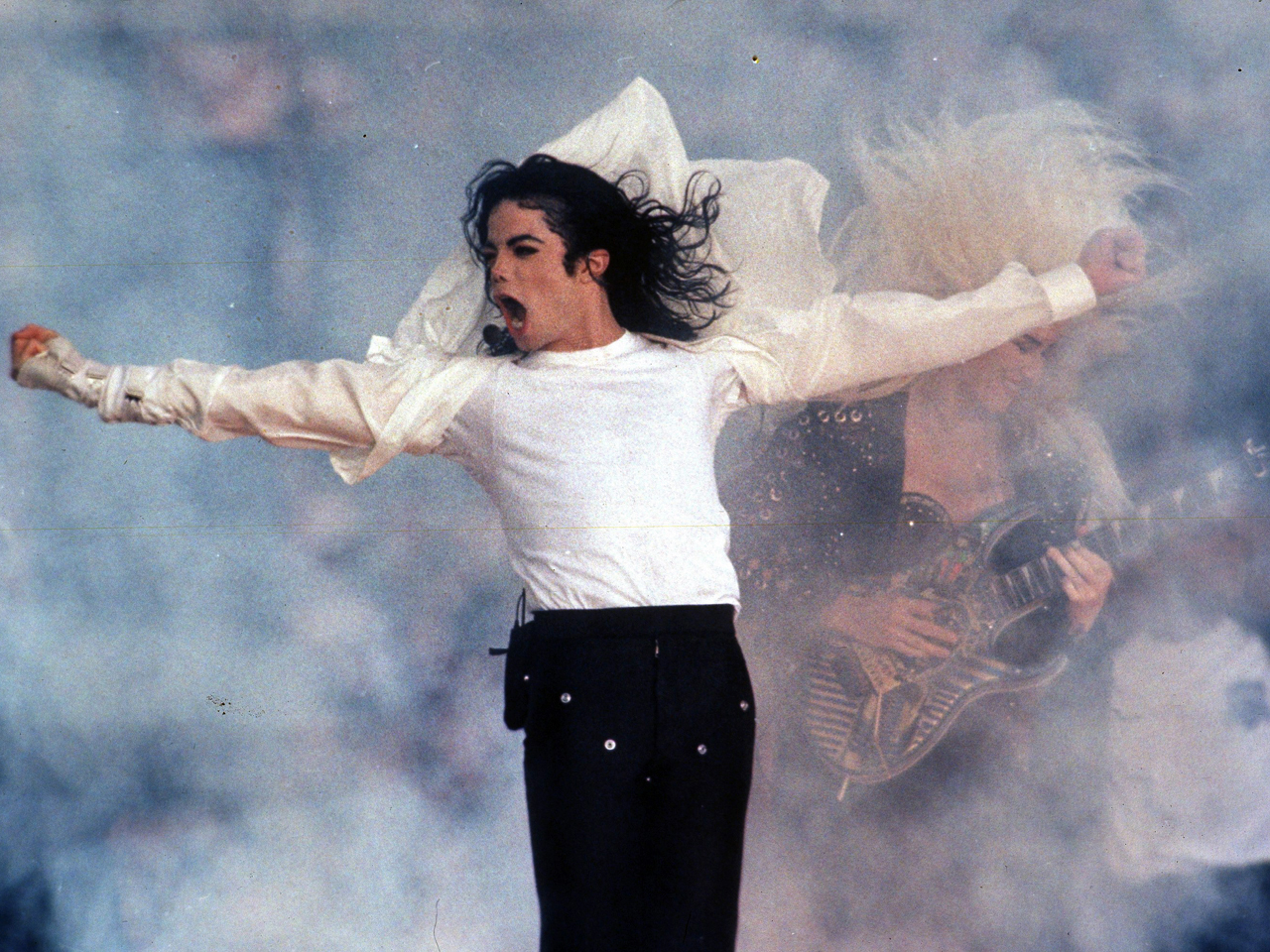 The following script is from “Michael Jackson” which aired on May 19, 2013, and was rebroadcast on Sept. 8, 2013. Lara Logan is the correspondent. John Hamlin, producer.

It’s been over four years since Michael Jackson died, but he continues to make headlines. Some of them coming out of a Los Angeles courtroom right now where his mother is suing for damages over his death from a powerful anesthetic in June 2009. But, as we first showed you last spring, the headline of this story is that Michael Jackson is making more money after his death than he ever did when he was alive.

Tonight you’ll hear about the most remarkable financial and image resurrection in pop culture history. And get a rare look at what Michael Jackson left behind. The Michael Jackson brand is alive and well. Well-paid that is. Extremely well-paid.

Barcelona, Spain. The 297th performance of the Michael Jackson IMMORTAL World Tour. Cirque du Soleil produces the show featuring their acrobats and contortionists, but Michael Jackson -- or at least his music -- is the star.

John Branca is an executor of Michael Jackson’s estate -- an architect, if you will -- of how to make money off his legacy, most of which will eventually be turned over to Jackson’s three children. Branca was Jackson’s lawyer and advisor off and on for over 25 years and negotiated many of the singer’s biggest deals during his lifetime.

John Branca: That is absolutely true. Worldwide box office now is over $300 million. And Michael has almost 60 million Facebook friends. He’s the biggest selling artist on iTunes and he’s sold approximately 50 million albums since he passed away.

Lara Logan: It feels like you can’t talk about all those great things about Michael without talking about the fact that his image was so battered and tarnished by the time of his death. Have his fans just forgotten about all of that? About all the weirdness?

John Branca: As managers of the estate, we don’t really pay attention to the tabloids. We look at the Michael that we knew, the real Michael, the artistic genius, the visionary.

Lara Logan: The real Michael Jackson also told Ed Bradley on 60 Minutes that he let young boys sleep in his bed. You can’t run away from that right? You can’t hide from it.

John Branca: Well, I don’t recall that interview and, um, I just know the Michael Jackson that I knew was somebody I considered, you know, a very honorable person.

John Branca: There was a series of wills and they were substantively almost identical.

John Branca: Never changed. The whole objective of Michael’s estate plan is to take care of his mother during her lifetime and to accumulate the principle and assests for the benefit of Michael’s children.

The will named Branca and John McClain, a longtime friend of Michael Jackson, as co-executors. Jackson’s crippled image was not the only thing they had to contend with. At first glance, Michael Jackson left more debt than anything.

Zack O’Malley Greenburg: The day he died, Michael Jackson had about half a billion dollars in debt.

Zack O’Malley Greenburg is a senior editor for Forbes Magazine and he’s been covering the estate since Jackson’s death.

Lara Logan: How much did his lifestyle and his personality have to do with his debt?

Zack O’Malley Greenburg: He never stopped spending like it was the 1980s. We charted it in Forbes. I mean, he was making $50, $60, $80, over $100 million some of those years-- and even into the 90s, but after the first allegations in 1993, he never toured in the U.S. again. He never got another endorsement deal in his lifetime.

Zack O’Malley Greenburg: In 1993, correct. He became in many ways radioactive to brands and to the sorts of companies that would, you know, contribute to those massive paydays in the 80s. And the upkeep on a place like Neverland, you know, the spending on antiques and so forth and the maintenance of his entourage and all of that, you know, really-- it really added up.

Lara Logan: This is one of how many warehouses that you have?

You can see how he spent his money and some of what made up his extravagant lifestyle in this California warehouse.

Karen Langford: That is the actual sign from Neverland that was over the gates.

Karen Langford was friends with Michael Jackson and worked with him from 1981 until his death. She’s now the archivist for the Jackson estate. There are rows and rows, floor to ceiling, of Jackson’s possessions, most of it never seen publicly since he died. This warehouse is 20,000 square feet. Every inch of it is full. There are antiques and video games from Neverland ranch, his Grammys...

And 30 years of cars he never wanted to get rid of.

Lara Logan: Are these all Michael’s cars?

Karen Langford: Uh, these are some of them.

Lara Logan: Some of them?

Karen Langford: Some of them.

Lara Logan: Did he drive any of these cars?

Karen Langford: He did drive on occasion.

Late in his life Michael Jackson financed much of his lifestyle by routinely borrowing against his assets, but it wasn’t these personal belongings that he used as collateral.

Although the copyright value of his own songs was worth well in excess of a hundred million dollars, the crown jewel of his investment strategy was his portfolio of other people’s songs - especially those of the Beatles.

Lara Logan: Tell me about the music catalog, the publishing catalog that you advised Michael to buy.

John Branca: We started with the Sly & the Family Stone catalog, we bought some rock classics, People Get Ready by Curtis Mayfield. Dion & The Belmonts, Runaround Sue, The Wanderer. When a Man Loves a Woman. Great Balls of Fire. Shake, Rattle, and Roll. But then one day I got the call that the Beatles catalog was for sale. It was called ATV Music. And it was as if we had hit the mother lode.

Lara Logan: And you paid?

John Branca: The price was $47.5 million. And we later merged it with Sony’s music publishing company to create one of the biggest publishers in the world, Sony ATV Music, that the estate, to this day, owns 50 percent of.

Lara Logan: And so how much is that worth today?

John Branca: I -- I wouldn’t want to speculate about what it’s worth, but it --

Lara Logan: You didn’t make all this money in this town without knowing what your investments are worth.

John Branca: Well, it would be speculation at this point.

Lara Logan: It’s estimated to be worth, like, a billion dollars.

John Branca: Well, you know, you never really know what something’s worth until you go to sell it. And we are not sellers. We are not gonna sell any assets.

At the time of his death Michael Jackson had borrowed $380 million against the value of the songs he owned. So the estate had to move quickly to avoid losing the songs to creditors.

John Branca sold future music rights to Sony for a reported $250 million. It was the biggest record deal in history.

Branca’s team also combed through personal video shot during rehearsals for a comeback tour Jackson was preparing for right before his death. The footage showed the talent Michael Jackson still possessed as a singer, dancer and entertainer, then 50 years old.

It was made into a movie, called “This Is It” and was released within months of Michael Jackson’s death. So far it’s made over $500 million.

Zack O’Malley Greenburg: A lot of companies got on board with Michael Jackson once they saw the success of “This Is It” and once they saw, you know, Sony investing a quarter of billion dollars for that record deal. You know, then you see Pepsi coming back and doing an endorsement with him. You see Cirque du Soleil coming in and doing a show. You know, I think that those first couple deals proved that Michael Jackson was no longer radioactive.

Lara Logan: So, death erased all his sins or even possible sins or suggestion of sins?

Zack O’Malley Greenburg: I think his death caused people to remember him as he was in the Thriller years. You started to hear Billy Jean and Beat It and Thriller on the radio all the time, I think that that transported people back to the mid-’80s when Michael Jackson was at the peak of his career.

That’s what the Jackson estate and Cirque du Soleil gambled on. Michael Jackson’s 1983 Thriller video helped the Thriller album become largest selling ever. It had seven hit songs on it.

His music drives the touring Cirque du Soleil production. Jackson’s estate and Cirque du Soleil are 50/50 partners. And while this show is expected to continue touring for years, a new production opened this summer in Las Vegas. It’s called Michael Jackson: One. And we were allowed in to watch one the final rehearsals.

Lara Logan: Do people come here to see Michael Jackson? Or are they coming to see something else?

Guy Laliberte: I think people are coming here -- yes, because they’re passionate about Michael. So it’s very tricky because you’re touching an iconic figure. And we have to be careful. Because the base fans they are very, very difficult and demanding.

Making money on Michael Jackson’s legacy is one thing. Keeping it is another. John Branca needed a team of lawyers to navigate a litany of claims against the estate.

John Branca: There were so many claims that were filed. And I can honestly tell you that most of them were ridiculous. Most of them were absurd. People making paternity claims and claims to have written all the songs that he ever wrote. And, you know, when you have an estate and you’re in front of a court, you have to take these things seriously.

Lara Logan: Every single one?

John Branca: Every single one.

Lara Logan: Settling some-- throwing some out?

John Branca: Throwing many out, settling the ones that we thought were valid. There’s a couple that are still pending.

Also still a work in progress is the sorting of Michael Jackson’s effects.

Lara Logan: This is what he wore.

Karen Langford: Here it is.

Karen Langford: This is one of the safes that we have and...

Karen Langford showed us some of the more valuable items, which are kept in this safe. Like this sequined glove he wore while on tour. It’s estimated to be worth over $80,000 at auction.

Lara Logan: Can I touch it?

Lara Logan: Look at that. Sh -- I mean, you can’t look at that without -- look at how it sparkles.

All of his belongings will be preserved until Michael Jackson’s children come of age.

Karen Langford: This is his shoes.

When they can decide what’s to be done with all of it. The more time passes, the more its value. And the more money his legacy generates. Executors Branca and McClain get 10 percent of what they make for the estate, but their results speak volumes: they’ve already erased the half billion dollars of debt Michael Jackson had at his death.

Zack O’Malley Greenburg: Since Michael Jackson died, the estate has taken over $600 million.

Zack O’Malley Greenburg: --over $600 million. And that’s more than any single living artist has made over that period of time.

Lara Logan: And he’s not around to spend any of the money.