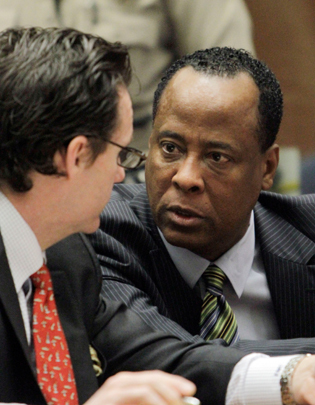 (CBS/AP) LOS ANGELES - The first steps toward the long awaited trial of Michael Jackson's doctor on involuntary manslaughter charges are taking place as 320 prospective jurors converge on a Los Angeles courtroom for the first phase of the screening process.

Houston based cardiologist Conrad Murray is accused of gross negligence in giving Jackson a lethal dose of the drug propofol and other sedatives.

In-person questioning of jury prospects and opening statements won't happen until May but the judge agreed to start the process Thursday with written questionnaires in order to meet the statutory requirement of giving Murray a speedy trial. Once the forms are distributed and filled out, the trial will be deemed to have begun.

While the judge has decided to allow cameras in court for testimony they will not be allowed during jury selection.

Pastor's first job is to screen the prospects on whether they can afford to spend two months on the trial. Many who can serve will be public employees or employees of corporations who are paid for jury duty. Typical juries for long trials also include retirees who don't have job pressures.

Those who pass the time qualification will be given a questionnaire with about 125 questions. The inquiry is likely to cover their knowledge of the case, their tastes in music, their relationships with their own doctors, their knowledge of prescription drugs and whether they have predetermined views about the guilt or innocence of Murray.

Members of Jackson's family and a cadre of loyal Jackson fans are expected to attend most of the trial.

Murray, who also operates a clinic in Las Vegas, has his career on the line. The judge has already suspended his license to practice medicine in California and medical boards in Texas and Nevada could follow suit if he is convicted. It is one reason his lawyers said he wanted a speedy trial.

In a six-day preliminary hearing earlier this year, a portrait emerged of a doctor trying to help his famous client overcome debilitating insomnia with propofol, an anesthetic which is not intended for home use. Jackson had used it before and demanded it, calling it his "milk."

A coroner testified that Jackson, 50, died of a propofol overdose in combination with other drugs on June 25, 2009. His death was classified as a homicide.

Testimony at the trial will include some similar elements to those in the preliminary hearing.

Murray's behavior before and after Jackson stopped breathing was detailed by household staff and paramedics. It was backed up with phone records, e-mails and, most importantly, a transcript of Murray's nearly three-hour interview with police.

Murray said he gave Jackson a low dose of propofol after spending 10 hours trying to get him to sleep using other drugs. When the star appeared to doze off, Murray said he left the room for two minutes to go to the bathroom then returned to find Jackson not breathing.

He delayed calling 911 for between 25 minutes and an hour while he tried to revive him, testimony showed.

The defense team suggested in questioning witnesses that Jackson may have inadvertently killed himself, taking an extra dose of propofol when Murray left his bedroom for a few minutes. They have also recently sought medical records they say will show Jackson was addicted to the sedative demarol. They are expected to claim this was a contributing factor to his demise.