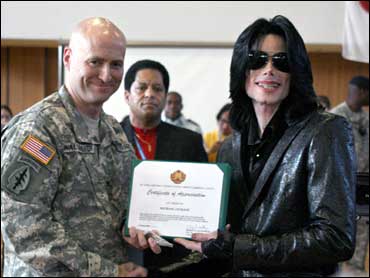 Michael Jackson greeted thousands of U.S. troops and their family members at a U.S. Army base south of Tokyo on Saturday, taking a break from days of parties with die-hard fans and well-heeled business people.

About 3,000 troops and their family members gathered at a fitness center at Camp Zama. Jackson walked around shaking hands and exchanging words to thank them for their service.

Jackson, 48, arrived in Japan last Sunday for his second trip in less than a year to attend parties, including an extravagant gala held Thursday in Tokyo.

The reclusive pop icon was the guest of honor at the lavish party aimed at a well-heeled business crowd, though the roughly 400 people who showed up were mainly die-hard fans — and more than 100 orphans and handicapped children who were invited for free.

The paying guests each laid out $3,500 for tickets, which included a buffet dinner, a show featuring several Japanese Michael Jackson impersonators — and a chance to meet, greet and take photos with Jackson.

On Friday, he made an appearance at another party for his less-affluent fans. More than 1,000 people crowded a popular night club.

He did not perform at either party.

Jackson, one of the best-selling artists of all time, has lived abroad since his 2005 acquittal on child molestation charges, forsaking his Neverland Ranch in California for residences in Bahrain, France, and a castle in Ireland.

Jackson will spend another three or four days in Tokyo.